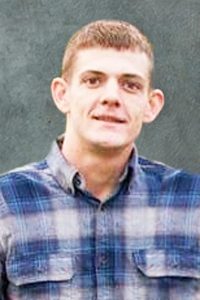 He was born on November 29, 1993, in Lexington, KY, the son of Ricky Dean Foley and Deanna Porter Foley, who survive. After graduating from Bourbon County Christian Academy, he became a laborer on a local farm in Paris, KY. He had professed faith in Jesus Christ and held fast to his beliefs.

In addition to his parents, Ricky and Deanna, he is survived by a brother, Ryan Dane Foley and his wife Ashley; two nieces, Claire Ryan Foley and Heidi Wren Foley. Also surviving is his lifelong friend, Jacob Len Coburn and his beloved pet, Roofus. Preceding him in death were his grandparents, Cecil and Eloise Foley, and Donald and Ann Porter.

The family has chosen a private visitation and service that will be officiated by Carl Willoughby. Burial will follow in Machpelah Cemetery in Mount Sterling, KY, with pallbearers being Ryan Foley, Jacob Coburn, Justin Carolin, Rusty Coburn, Jeff Robinson, and Rick Bridges.