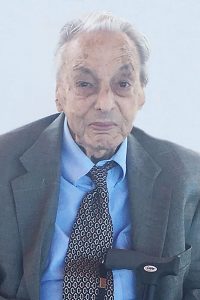 Liborio Samuel Balsemo died Monday, February 28 at Bourbon Heights in Paris, KY, two weeks short of his 94th birthday.
Sam was born on March 11, 1928, in Allentown, PA. He attended Lafayette College in Easton Pennsylvania, then served as a private in the United States Army from 1944 to 1947. He graduated from Ryder College in Trenton, NJ in 1950.
He moved to Kentucky with his family in 1969 and shortly after became a member of the Church of the Annunciation parish in Paris.
He is survived by a sister, Josephine Fortman; brother-in-law, Peter Fortman; daughter, Kathleen Gustafson; son, Mark Balsemo; daughter-in-law, Janeese Balsemo; son-in-law, Jarl Gustafson; three grandchildren, James Marcus, Antony Blaine Balsemo and Brianna Kane; and six great grandchildren, Halia, Anjelina, Aries, and Domonic Balsemo; and Lila and Mia Kane.
He is preceded in death by his parents, Salvatore and Carmella Balsemo and will be buried in Mt. Olivet Cemetery in Paris beside his wife of 59 years, Maria Valenti Balsemo.
In the interest of public health, no funeral service or viewing is planned. A memorial mass will be celebrated at a later date.
In lieu of flowers, donations are suggested to the Annunciation Church Organ Fund. Hinton-Turner Funeral Home is in charge of arrangements.