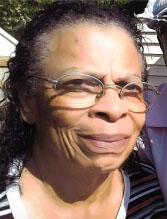 Johnetta Mae Reed, 87, died Monday, March 14, 2022 at Bourbon Heights Nursing Home, Paris, KY.
A native of Paris, KY, she was the daughter of the late Harvey and Rhoda Thompson Reed. She was the head cook and cafeteria manager with the Paris School System for 47 years. She was a member of the First Baptist Church, Paris, KY.
She is survived by one daughter, Jeanetta Laythen; one grandson, Michael (Renee) Laythen; three great-grandchildren, Chabria Laythen, Chadwick Adams and Chantele Williams; five great-great-grandchildren; one sister, Laura Fields and a host of nieces, nephews and cousins.
In addition to her parents, she was preceded in death by a host of brothers and sisters.
Funeral services were conducted at 12:00 PM Monday, March 21, 2022 at Lusk-McFarland Funeral Home, 1120 Main St., Paris, KY by Rev. Dr. Morgan Gilkey. Burial was in the Evergreen Memory Gardens.
Visitation was from 10:00 AM until the hour of service on Monday, March 21st at the funeral home.
Pallbearers were Thomas Reed, Jr., Troy Robinson, Manuel Franklin, Steve Jones, John Riggs and Chris Riggs.
The funeral arrangements were entrusted to the Lusk-McFarland Funeral Home, 1120 Main St., Paris, KY.
The online guestbook is at www.Lusk-McFarland.com and a 24-hour funeral information line can be reached by calling 859-987-4387.