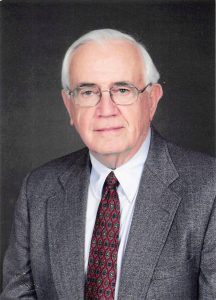 Frank D. Whitney, husband of Clara Spencer Whitney, of Paris, departed this life on Tuesday, March 29, 2022, at the Hospice Care Center in Lexington, Kentucky, having attained the age of 92 years. Frank was born on August 12, 1929, in Whitesville, Kentucky, located in Daviess County, the son of the late Ora Rebecca Butt McDonald and Rodney Blake Whitney. His first year of school he attended a one room school in Gainesville with his two older brothers and his sister. In 1948, Mr. Whitney graduated from Sebree High School, Webster County, Kentucky, where he played on the varsity basketball team.
Mr. Whitney began working for construction companies while in junior high and high school. He enrolled in the University of Kentucky in the Fall of 1948. To support himself, he worked at restaurants, drove a taxi, and mowed lawns, plus worked summers for the Chrysler Corporation, Evansville, Indiana, on the assembly line and for the Kentucky Department of Highways on a locations crew. He also worked for the KDOH at the Highway Research Lab on the UK Campus from 1951 until he received his Bachelor of Science in Civil Engineering in June 1953.
He was a member of the ROTC at the University and following graduation, he was commissioned as a second Lieutenant in the United States Air Force. He was stationed with the 2584th ARFC at the Municipal Airport in Memphis, Tennessee where he served as assistant installation engineer. Mr. Whitney was active in the Memphis Engineers and Architects Club. He also played on the Air Reserve Flying Center Basketball Team. He earned the rank of first Lieutenant and finished his term of duty in November 1955.
He returned to UK in November of 1955 to finish work on his master’s degree in civil engineering. He also returned to work at the Highway Research Lab as a research assistant. His thesis was on “A Laboratory Investigation of Local Fly Ash in Concrete Mixes.”
In June of 1957, Mr. Whitney went to work for the American Builders Supply Company in Louisville. He was a director of the Louisville Engineering and Architects Club. IN July 1966 he joined River Sand and Stone in Evansville, Indiana as vice president and sales manager. In 1968, he began working for Hinkle Contracting in Paris as manager of the Specialty Contracting Division.
In July 1972, Mr. Whitney began Apex Contracting, a highway specialty construction firm. Apex is qualified to work in fifteen southeastern states as a prime contractor installing highway signs, lighting, guardrail, sound barriers, variable message signs, bridges, and traffic management systems. Of the more recent jobs, Mr. Whitney is proud of the Hopewell, Virginia soundwall, the Shreveport, Louisiana soundwall, lighting and sign project and the bridge over Herrington Lake, Kentucky.
He is a member of the UK Fellows Society and a Life Member of the University of Kentucky College of Engineering Alumni Association. He is a registered Professional Engineer in Kentucky and has been registered in Virginia and Mississippi.
Mr. Whitney served on the board of directors for the Paris-Bourbon County YMCA and on the Bourbon County Courthouse Commission. He was chairman of the board of directors of the National Bank in Paris, and when that bank was bought by Fifth Third Bank, became chairman of the board of directors of Fifth Third Bank of Central Kentucky. He is a member of the First Baptist Church of Paris where he served as a deacon, trustee, director, and assistant Sunday school teacher.
Frank married Clara Spencer of Memphis, Tennessee, in 1955, who survives. Also surviving is a son, Frank D. Whitney, Jr. In addition, several nieces and nephews survive, John R. Cuttitta, Christine Cuttita, Bill Whitney, Jr., Benny Whitney, Leanne Whitney, Denise Brunsman, Robin Whitney, Jennifer Whitney, Blake Whitney, Becky Osborne, and Johnny Davis.
Mr. Whitney was preceded in death on September 06, 2006, by a daughter, Gale Grayson Whitney, as well as two brothers, Bill Whitney, Bob Whitney; a sister, Marjorie Davis; and his stepfather, Donald McDonald.
The funeral service for Frank D. Whitney is at 1:00 p.m. on Monday, April 4, 2022, at First Baptist Church, Paris with Pastor Kyle Sullivan officiating. Interment is in Paris cemetery with the deacons of First Baptist Church serving as casket bearers. Visitation begins at 12 Noon until time for the service.
In lieu of flowers, the family suggest donations to the Alzheimer’s Association, Post Office Box, 96011, Washington, D.C. 20090-6011. www.hintonturner.com