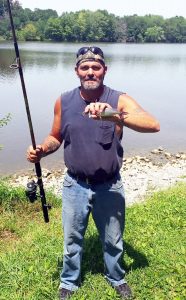 Gilbert Allen Robinson, 52, of Paris, passed away Friday, April 15, 2022 at his home.
Born February 15, 1970 in Bourbon County to the late Gilbert Grant & Gracie Wilson Robinson, he worked for many years in metal salvage, including at Ledford Steel. Gilbert loved fishing, hunting and working on vehicles, he would try to fix anything and had the biggest heart.
Surviving are two children: Austin Samuel (Stephanie) Robinson, of Ewing, and Ayla Noelle Robinson (Tyler Schuchart), of Cynthiana; a brother, Dewey (Melissa) Robinson; three sisters: Teresa Robinson, Rosa Robinson Jones and Ginny Edgington, all of Paris; and two grandchildren, Elizabeth Grace and Easton James Robinson.
Following cremation, the family will do a service at a later date.
Arrangements are under the direction of Mathers-Gaunce Funeral Home.
Condolences may be left at www.mathersgaunce.com