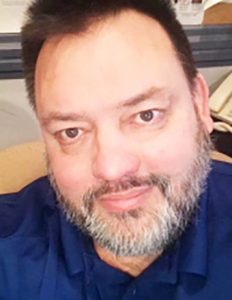 Bradley Wayne White, 53, died Monday, April 18, 2022, at the St. Joseph Hospital, Lexington, KY.
Born in Winchester, KY, he was the son of Janet Marie Hall White and the late Robert Wayne White. He graduated from Eastern Kentucky University with a bachelor’s degree in Broadcast Media. He was a television producer for GTV3.
He had a passion for his media job as a GTV3/LEX TV producer for over 20 years. He used his skills behind a camera to capture even more remarkable beauty around him. His many friends appreciated the prints of local sites he photographed for them. His passion continued into the culinary arts as well, as he loved to cook and prepare meals that he often shared with others.
He had a life-long love affair with all things Star Wars, even attending the 2017 Star Wars Celebration in Orlando and never missing a movie or television series devoted to the franchise. He was also a collector of Lego, Marvel, Disney, and DC. Not to mention, he hung onto his love for the Steelers through many ups and downs throughout the years. He followed professional basketball and always remained an enthusiastic follower of the University of Kentucky Wildcats basketball team.
In addition to his mother, he is survived by two children, Lucas Walker White and Olivia Jane White; one sister, Raina Rukavishnikova; one niece, Noel Rukavishnikova; several aunts, uncles, cousins, including one special aunt, Wanda Pitts.
Funeral services were conducted at 1:00 PM Monday, April 25, 2022, at Lusk-McFarland Funeral Home, 1120 Main St., Paris, KY by Bro. Dale Robbins. Burial was in the Evergreen Memory Gardens.
Visitation was from 11 AM until service time on Monday, April 25th at the funeral home.
Pallbearers were Robert Stagner, John Tuttle, Don White, Lee Clark, Bobby Joe White, Larry Curtis, Kevin Hensley and Charlie Farmer.
Honorary pallbearer was Lucas W. White.
Memorials may take the form of contributions to Lusk-McFarland Funeral Home to assist the family in paying for the funeral.
The funeral arrangements were entrusted to the Lusk-McFarland Funeral Home, 1120 Main St., Paris, KY.
The online guestbook is at www.Lusk-McFarland.com and a 24-hour funeral information line can be reached by calling 859-987-4387.