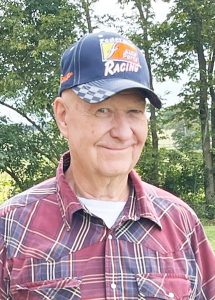 Ronald Bruce Reffett, 78, retired industrial engineer at Hoover Wire Products, a Leggett & Platt Division, U.S. Army Reserve Veteran, and husband of Rose Mary Shanks Reffett, died Wednesday April 13, 2022 at his home. He was born on April 19, 1943 in Bourbon County, KY to the late Bruce and Thelma Plummer Reffett.
Ronald was a 1961 graduate of Bourbon County High School. He was a loving husband and father. He also was a member of the First Church of God and he loved the Lord. He had been a member of several car clubs over the years including the Southern Knights Car Club, had many friend in the Bourbon Street Cruisers and loved classic cars, like his own 1956 Chevy that he was had since 1962. Ronald was born and raised on a farm just a few miles from his home.
Ronald joined the 100th Division of the Army Reserves on August 14, 1964 and went to Fort Gordon, Georgia for six months. He was attached to the Head Quarters Detachment, 1st training Regiment. While on basic training, he qualified as a sharp shooter with the M1 Garand rifle, after basic I became a jeep driver for Company Commander and also drove a light duty truck having ammo to shooting ranges. After six months active duty he returned home to complete the remaining service obligation of five years and five months at the Army Reserve Center on Russell Cave Rd. He later received his honorable discharge on April 16, 1970 at the rank of Sargent.
In addition to his wife, he is survived by two daughters, Robin Lynn (Ricky) Sparks and Nicole Renee (Lane) Linville; one son, Michael Ryan Reffett; one brother, Gerald Wayne (June) Reffett; four grandchildren, Ethan Linville, Carter Linville, Haylee Linville and Kaitlyn Gaunce; one great grandson, Wesson and several nieces, nephews and cousins.
In addition to his parents, he was also preceded in death by one sister, Roberta Thomas.
Funeral services will be conducted at 1:00 PM Saturday April 16, 2022 at the Lusk-McFarland Funeral Home, 1120 Main St., Paris, KY by Rev. Tim Pierce. Burial followed in the Paris Cemetery.
Visitation will be from 11:00 AM Saturday April 16, 2022 until the hour of service at the funeral home.
Pallbearers were Michael Reffett, Lane Linville, Ethan Linville, Ricky Sparks, John Reffett and Rob Dix.
Honorary pallbearers were Jay Caswell, David Hatton, Carter Linville, Henry Clay Owen, Jason Shanks, Leonard Shanks and Joseph Hatton.

Memorials may take the form of contributions to the First Church of God, Paris, or Hospice of the Bluegrass.
The funeral arrangements were entrusted to the Lusk-McFarland Funeral Home, 1120 Main St., Paris, KY.
The online guestbook is at www.Lusk-McFarland.com and a 24-hour funeral information line can be reached by calling 859-987-4387.