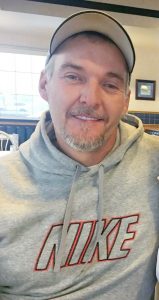 John Spencer Jones departed this life unexpectedly on May 24, 2022, having attained the age of 46 years. John was born the son of the late Franklin Donald Jones and Jimmie Faye Feeback Jones, was a graduate of Paris High School, and worked as a plumber. He was an outdoorsman with two of his favorite pastimes being fishing and hunting. In addition to his parents, he was preceded in death by a brother, Donald Wayne “Pete” Jones.
Surviving are his daughters, Brittany Jones and McKenzie Jones; a son, Luke Jones; three grandchildren, Brooks Necessary, Kingston Berry, and Milani Davis. Also surviving are three sisters, Lena (Wayne) Turner, Rachel (Vince) Matteni, Whitney Jones; and a brother, Eddie Jones.
A memorial service will be held at a later date. www.hintonturner.com