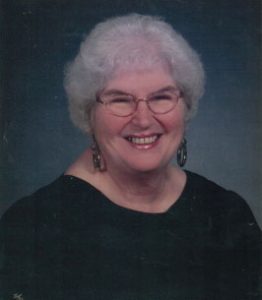 Patricia Massie, age 85, a business and music teacher, passed away on Thursday, June 30, 2022, at Harrison Memorial Hospital. She was born April 1, 1937 in Paris, daughter of the late Harold Dotson and Rena Rankin Tolson. She was a graduate of Paris High School and received her Bachelor’s Degree from Georgetown College. Pat married Jack Massie on May 2, 1959 at First Baptist Church in Paris.
In addition to her husband, Pat is survived by two sons, Rick (Lynn) Massie, Rob (Shari) Massie; two grandchildren, Jordan (Jill) Massie, Brynne Massie; four great grandchildren, Jaxon Massie, Juliana Massie, Ezra Bowens, Josiah Bowens; a brother, John Tolson; and special friend, Jamie Massie. She was preceded in death by her parents; a son, Ron Massie; and her stepfather, John Boyd Tolson.
She was a devout follower and believer of Jesus, a loyal wife, loving mother, grandmother, great grandmother, sister, aunt. She remembered every cousin, near or distant, every student, and every friend, nobody was forgotten. She held everyone so near to her heart and her empathy and thoughtfulness impressed us the most. Everyone was made to feel important, and she genuinely cared.
She was fascinating on the piano, a true musical beast. She rarely missed a sports game, and she was one of the loudest in the stands. She loved her Reds and called them out from her kitchen seat on a first name basis if they committed an error. She loved her family relentlessly, and her faith never wavered. You don’t find many like her anymore.
The family will have a private service with a public Celebration of Life to be held at a later date. www.hintonturner.com