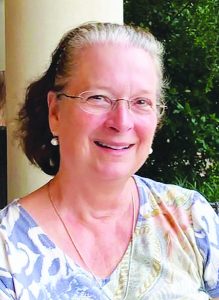 Cathy was a 1981 graduate of Transylvania University. She was so happy to be a member of the Tri Delta sorority, Younger Women’s Club of Louisville, Millersburg Garden Club (where she became a master gardener), Suburbanites Homemakers, and many other groups.

Cathy was preceded in death by her parents, Alex and Bette Miller, brother, Michael Miller, and brother-in-law, Sam Wells. She is survived by her husband of 36 years, William Blanton Wells, and their son, Alex Miller Wells. She is also survived by sisters- and brothers-in-law: Dorothy and Robert Jones, Mary Leta and Chuck Smith, and Lila and Gregory Wells; her beloved nieces and nephews: Teresa Jones, Melissa Jones O’Brien (Patrick), Alicia Wells (Aaron Saxton), Wesley Shea Wells (Cody Alexander), Shea Bennett Wells, Fletcher Wells, Stuart Wells; and, grand niece, Ginger O’Brien.Cathy requested no flowers, plant them instead in her memory.  Memory contributions in Cathy’s honor may be made to the ALS Association KY Chapter or the charity of your choice.Visitation will be at 1 PM on Saturday, August 13, 2022, at Ratterman’s Funeral Home, 12900 Shelbyville Rd., Louisville, KY 40243, with a service on the same day beginning at 3:30 PM. Cathy will be buried at the Millersburg cemetery at a later date.