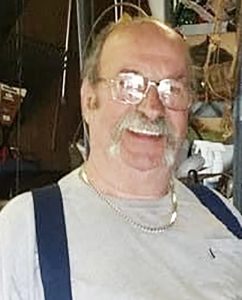 Daniel (Dan) Wayne Haggard, 73, loving husband of 44 years to Cindy Haggard, passed away the 31st day of August, 2022 at the Hospice Unit in St. Joseph Hospital, Lexington KY, after a long courageous battle with COPD. Born October 3, 1948 in Lexington KY, to James R. and Mabel B. Haggard. Dan was a devoted husband, father, brother, and friend to so many. He never met a stranger and would sit for hours to talk, mentor, guide, and pray with anyone that welcomed him.
Dan was widely known for his incredible automobile paint & body work; which earned him the nickname “Dan Dan the Body Man, if he can’t fix it nobody can”.
Dan honorably served in the US Army and proudly fought in the Vietnam War (1968-1969). Dan was a member of the Heritage Assembly of God and a former volunteer firefighter with Clintonville F.D. (Paris KY). Besides his wife Cindy, he is survived by his children: James (Melanie) Haggard, Ruth Ann Ragland, Ruby (Jamie) Palmer, Vicki (Wes) Herald, Donna Parker, and Danielle Haggard. Dan is also survived by many grandchildren and great-grands including his special grand”son” Jake Parker, a sister Sherrie (Steve) Ashman of Calbert WA, and a special sister-n-law Tina (Scot) Warner of Carlisle PA. His son, Daniel Wayne Haggard II predeceased him, as well as his grandson Matthew Charles (son of James & Melanie). Services pending with Care Cremations in Lexington KY. In lieu of flowers, the family asks that donations be made to Care Navigators (Hospice) of the Bluegrass, Cynthiana Division, as a way to thank them for the excellent care they provided.