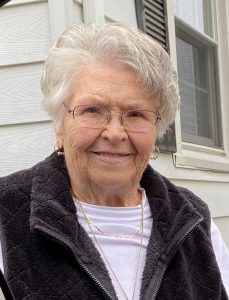 Betty Reinsmith, beloved wife of the late Cecil Ray Reinsmith went to her eternal home on Monday, September 5th at her home with her daughters by her side.

Betty was born January 31, 1939, to Virgil Estes & Elsie Ruth Long.  She was the oldest of nine.  She was born, raised and stayed in Bourbon County.

By being the oldest of the nine gave her many opportunities and responsibilities. She was a jack of all trades there wasn’t anything that she couldn’t or wouldn’t try to attempt.  No one would hesitate to ask for her assistance or knowledge with a task.

Betty began her career at Bluegrass Industries which later became Kentucky Textiles. She retired in 1987 to begin the greatest career of all as a grandmother when her first grandchild Aaron was born.  Later tobe joined by Andrew, Abigail, Alan.

She loved crocheting, sewing, working in her yard, canning and bowling in her younger days, but most of all spending time with family and friends.  She was avid competitive card player.

Visitation will be held at 12:00 with Funeral Service at 2:00 at Bedford Acres Christian Church on September 10th. Jim Hutchison and David Casey officiated.  Burial will follow in the Evergreen Memory Gardens, Paris, KY.

In lieu of flowers, donations may be made to Bedford Acres Christian Church or Bluegrass Care Navigators.