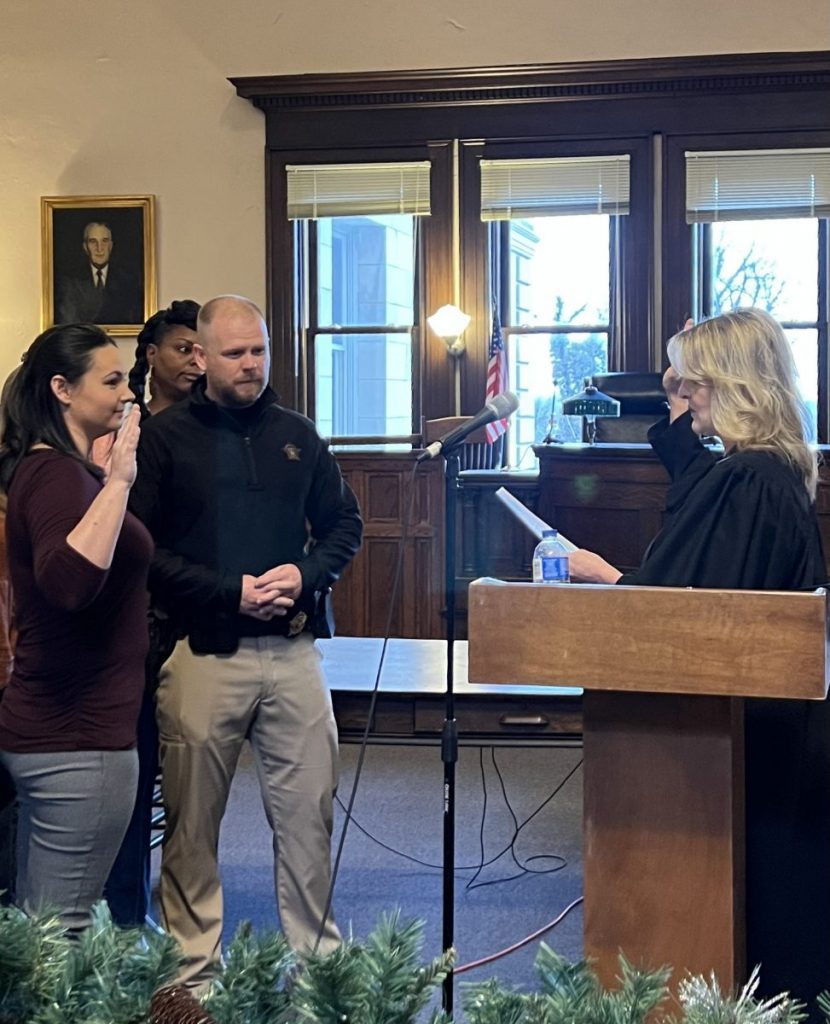 Some sixty elected and appointed officials were sworn into office on New Year’s Eve at the Bourbon County courthouse.

It took about 45 minutes Saturday morning to successively process the various officials. Each promised to uphold Kentucky’s constitution and to affirm that they have never “…fought a duel with a deadly weapon…”, among other required assurances.

The Citizen spoke with several of those elected for the first time, including six “freshmen” legislators. Here are a few of their observations about their new public service commitment.

Bill Conner is the newly elected Bourbon County fiscal court magistrate from the North Middletown district. Conner, 68, grew up in North Middletown, attending North Middletown School after starting out at a racially segregated school in Kerrville. He was a three sports (baseball, basketball and track) star at BCHS. For 35 years he lived in Frankfort, many of those years working at Toyota. His wife Carmella worked in admissions at Kentucky State University. “I was still coming home on weekends to visit my 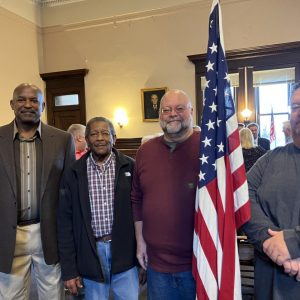 mother and family,” Conner explained. “This (North Middletown) is my home, and I thought I had good name recognition,” he added. “I worked hard at it (the election),” he believes. “And I know I have the education, work experience and good judgement to get the job done.” Conner acknowledges the challenge of serving a district which is “spread out” between North Middletown and Paris. “The issues may not always be the same, but I’m sure I can connect with all the people,” he says. Conner says he has no specific agenda, other than “…to work hard for all the citizens in my precinct, regardless of party.” Bill and Carmella operate “Stoner View Farm Bed & Breakfast”. Conner believes he may be the first African-American ever elected to Bourbon County’s fiscal court.

How many door-to-door visits does it take to upset a popular, three-term Bourbon County fiscal court magistrate? Newly elected magistrate Louie Stubblefield estimates he knocked on 800 doors during his campaign this year. He ended up winning by 32 votes over Jimmy Mason in the Ruddles Mills district. Stubblefield said he’s been attending fiscal court meetings for the past three years, in order to gain a better understanding of the issues and how county government works. Stubblefield is excited about the challenge of representing both the rural and urban areas of his district, including the historic Westside neighborhood of Paris. Of specific interest is the transfer station relocation project. He’s also keenly aware of highway safety issues involving heavy commercial vehicle traffic on county roads, including Peacock Road. A 1971 BCHS graduate, Stubblefield is retired from IBM. He worked in the Bourbon County PVA office, but this is his first elected office. As for his relationship with former magistrate Mason, “He’s been a lifelong friend of mine. We graduated from high school together, and we played together on the freshman baseball team. I hope we’ll remain friends. After all, he’s a valued constituent, as they all are.”

FROM THE SCHOOL BOARD TO FISCAL COURT…

The new fiscal court magistrate from the Clintonville district is Todd Earlywine. Not exactly a stranger to local politics, Earlywine was an elected member of Bourbon County’s school board for 18 years, serving as chair for 16 years. “I always said when my kids are done, I’m done,” Earlywine explained, referring to his three children, all educated in the county school system. “Because I believe you should have a vested interest (in serving on the school board),” says Earlywine, himself a 1985 graduate of BCHS. With a long-time interest in politics and community service, and with one of his adult children still living in Bourbon County, he realized he still has a drive to be involved. Earlywine has a degree in business from EKU, and leads two firms, E&E Drilling and a spray foam insulation company. “My main concern is to get high speed internet throughout the county in the next four years.”

GIRLS IN THE ‘BURG…

Jan Wagoner loves Millersburg. So much so, at age 74, she’s ready to work long hours to help lead a revitalization of the community’s historic downtown. “I wasn’t born and raised here, but I was devastated by that fire…” which destroyed nearly a full block of downtown Millersburg back on June 23. Jan has lived in Millersburg since 2011, with her husband Rick, a Millersburg native. Other than a term on a local school board back in her native Michigan, this is Jan’s first elected office. She’s one of four new councilpersons, all female, who’ll join Millersburg’s city council in 2023. Coming in with her are Jo Bolton, Debbie Jackson and Terry Smith, CEO and founder of Bourbon Christian Academy, and wife of Community Ventures CEO and president Kevin Smith. They’ll join two incumbent councilpersons, Julie Hopkins and Michael Ray Jackson, Debbie Jackson’s husband. Wagoner stressed the importance of the ongoing support given to Millersburg by Community Ventures.

47 year-old Nathan Frazier is new to North Middletown’s city council. But he’s not new to local government. He was a city utilities worker there for about 20 years. “I’ve lived here (North Middletown all my life,” he explains. His late mother, Betsy, was city clerk for 33 years. Frazier didn’t list any specific goals for North Middletown. “I just want to stay involved,” he said. He’s employed with “Gridhawk”, a company specializing in gas line location.

TOO LEGIT TO QUIT (SERVING)

Mike Withrow retired as assistant city manager on New Year’s Eve, 2021, after 41 of years of service to the City of Paris. Hired on originally as a police officer, over the years Withrow has also served as fire chief, codes enforcement, building inspector and emergency management director. With so much experience, in so many areas of local government, it might have seemed almost inevitable that Withrow would throw his hat in the political ring. He ran unsuccessfully for fiscal court magistrate back in the 80’s, so his term as city commissioner will be his first experience as an elected official. “I don’t have an agenda,” he says. “But there are a whole lot of things in the works, including projects and grants, that I just want to see fulfilled.” Examples include the transfer station relocation, “Safe Routes to Schools” program, streets and roads improvements, infrastructure upgrades to water and sewer systems and emergency management programming. “Lots of positives in motion, but somebody’s got to see them through,” insists Withrow, a 1977 PHS graduate and lifelong resident of Paris. “It’s not that I know anything, but I’ve seen a lot,” he quips.