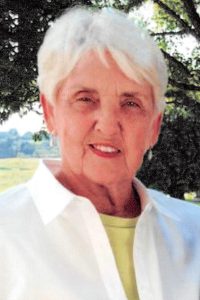 Born August 10, 1941, she was the daughter of the late William Harold, Sr. and Wilma Gordon Hilander. She was raised in Bourbon County, graduated from Bourbon County High School and Fugazzi Business College of Lexington. She was a member of Millersburg Presbyterian Church, Millersburg, Kentucky.   Mrs. Gillespie was a retired secretary, having worked at the University of Kentucky, Vogue Rattan Manufacturing Company, Farmers Tobacco Warehouse, and for 17 years served as the Executive Secretary of First Christian Church (Disciples of Christ), Paris. Recently she was employed by Kentucky Bank’s Wealth Management Department as Estate Inventory Recorder.   She was a former member of the Paris Woman’s Club, the Millersburg Merry Maker Homemakers, the Genella Bell Choir, and was a Girl Scout Leader in Millersburg.   She served as Secretary and Treasurer of the Bourbon County High School Class of 1959 and was Secretary of the Wagoner Family Reunion Planning Committee.   Mrs. Gillespie enjoyed gardening and landscaping and was an active member and twice President of the Millersburg Garden Club.   In 2014 she was awarded the honor of a State Life Membership in the Garden Club of Kentucky, Inc.   In addition, Mrs. Gillespie was a member of the Bourbon County Master Gardeners Association.   She also served on the Board of Directors of the Millersburg Cemetery Company as Secretary, as well as a board member of Millersburg Pride.

Services will be held at Hinton-Turner Funeral Home with Celebrant Sharon L. Berry officiating.   Visitation will be on January 14, 2023, at 10:00 a.m. until 2:00 p.m., with the funeral service to follow at 2:00 at the funeral home.   Cremains will be buried at The Millersburg Cemetery in a private family ceremony at a later date.

The family expresses special appreciation to the Bluegrass Hospice Care Team for their loving care.