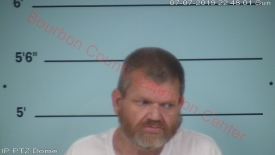 Hutson, 52 years old, was indicted by the grand jury for Manslaughter 2nd, after a lengthy police investigation into an overdose death.  Additional indictments were returned by the grand jury on Mr. Hutson for two counts of trafficking-controlled substance 1st , amphetamines, heroin and fentanyl and as a Persistent Felony Offender 1st.  Hutson is currently incarcerated at the Bourbon County Detention Center held on a $100,000 court-set bond.

“The manslaughter charge is in connection with an overdose death,” Burden said, “We want drug dealers to know that if they sell to someone who dies of an overdose that they will be held accountable.”   He added that other similar cases are pending both in state and federal court as part of the “War on drugs” effort. According to Burden there have been 12 drug overdose deaths in Bourbon County this year.