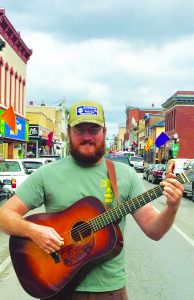 PAT CONLEY
Citizen Staff
PARIS, KY (Oct. 21, 2019)—Bourbon County native son Arthur Hancock, IV is out to show the world he’s not just a bluegrass musician anymore.
He spent two long days recently in a Nashville recording studio, emerging with his first country album ever, a five-song release entitled “Alive at Hillbilly Central.”
Many local folks remember Hancock as the leader of “The Wooks,” a nationally regarded band of young bluegrass musicians he pulled together in 2014. Hancock left The Wooks earlier this year, after a painful ergonomic injury rendered it almost impossible for him to play his favorite instrument, the banjo.
Now he’s trying his hand, pardon the pun, as guitarist–and vocalist–in a sort of country/bluegrass fusion. Hancock wrote four of the songs on the new album, including the playfully risqué “Kenton’s Outdoor Sitting Area” and “Wolfpen Branch,” which includes a nod to the big-time band “Tyler Childers & The Foodstamps.” Hancock helped mentor Childers when he was first getting a foothold in the music business; they once performed together in “Tyler Childers & Highwall.”
In recording Hillbilly Central, Hancock assembled a star-studded lineup of  musicians including his former mentor Jesse Wells, renowned fiddle player and one of the original Wooks.
Hancock’s interest in country music is certainly not new. He grew up listening to country with his dad on Stone Farm. Some of Arthur, IV’s biggest influences over the years have included Charlie Robison, Townes Van Zant and Robert Earl Keen. Comparing country to bluegrass, Hancock quips “there’s different things you can do with drums and electric guitar than with fiddles and banjos.” When people ask how he can play guitar with the same hand he hurt playing banjo? “It’s a lot harder playing bluegrass guitar than country guitar,” he insists.
Hancock, who turns 34 in February, is unafraid to challenge himself as a solo performer. In fact, he has another solo album already in the works. Considered by many to be one of Bourbon County’s most eligible bachelors, he keeps his personal life pretty private. The second youngest of a family which includes five female siblings, he laughs: “I’ve never had a problem talking to women.”
Hancock has a deep love for Bourbon County, its people and its land. He still resides on Thatchers Mill Road, and still intends to host periodic bluegrass and country shows at his “Stoney Point Jamboree,” a converted tobacco barn on the backside of Stone Farm.
According to many, Hancock is one of the most charming—and talented—musicians to ever come out of Bourbon County. Fans and followers interested in supporting his music can find his new CD at Lil’s Coffee House, 7th and Main in Paris.