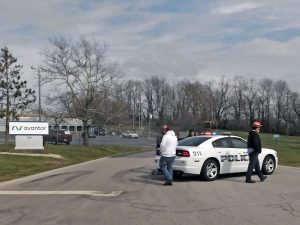 Entrance was closed at Avantor this Thursday morning because of a fire in the company’s warehouse.

Paris Fire Chief, Mike Duffy, reported that both the Paris Police and the Fire Department responded to a call at Avantor on the Bypass early Thursday morning.

“It was reported as a working fire in the company’s warehouse,” Duffy said. “When we got there we found that the fire was caused by chemicals coming in contact with other chemicals that resulted in a fire response.” He added that Avantor personnel were successfully addressing the chemical fire upon the fire department’s arrival.

Duffy said that HVAC systems at both the Bourbon County Detention Center and Cane Ridge Elementary School, both in close proximity to Avantor, were shut down to insure that no outside air would be circulated in the buildings.

“This was a safety precaution,” Duffy said, “and within 30 minutes or so we released both buildings to turn their HVAC back on line.”

Duffy reported that while in the Avantor buildings a number of fire violations were discovered and the plant was ordered to shut down operations until they were corrected.

“We have notified the State Fire Marshall in Frankfort of the incident,” Duffy said, “And we will go back and inspect the building once the corrections are made.”