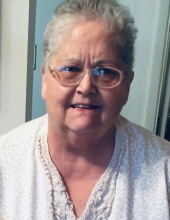 Mary Linda Cameron Caudill, 69, wife of Harrison Caudill, died Friday March 20, 2020 at her home.
A native of Paris, KY, she was the daughter of the late Robert Anderson and Eloise Fuller Cameron. She was a retired housekeeper for the Lexington Country Club and a member of the First Church of God, Paris, KY.
In addition to her husband, she is survived by one son, Robert (Lori) Caudill; two grandchildren, Morgan Caudill and Braxton Caudill; four brothers, Wayne (Linda) Cameron, Billy (Becky) Cameron, Gary (Loraine) Cameron and Ronnie (Trudy) Cameron; two sisters, Sharon (Danny) Purvis and Jan (Carl Wayne) Hafley and several nieces, nephews and cousins.
In addition to her parents, she was also preceded in death by one brother, Jim Cameron.
Private funeral services will be conducted at Lusk-McFarland Funeral Home, 1120 Main St., Paris, KY by Rev. Tim Pierce.
Private burial will take place at the Evergreen Memory Gardens, Paris, KY.
Pallbearers will be Robert Caudill, Tracey Cameron, Barry Hunter, Eric Hutchison, Ronnie Cameron, Candy Hutchison and Benny Edgington.
The family has elected to hold a private service and burial for immediate family only in remembrance of Mary Linda Caudill. Out of respect for the Governor’s request for both small and large gatherings, we want to do our part to respect all people of Kentucky as well as pay tribute to the beloved Mrs. Caudill.
The funeral arrangements were entrusted to the Lusk-McFarland Funeral Home, 1120 Main St., Paris, KY 40361.
The online guestbook is at www.Lusk-McFarland.com and a 24 hour funeral information line can be reached by calling 859-987-4387.