FRANKFORT, Ky. (KT) – Gov. Andy Beshear’s nightly briefing was nearly drowned out by several dozen protesters outside the Capitol on Wednesday who were chanting “We want to work!” and “Abortion is not essential!” in muffled voices.
Beshear, who gave updates of 88 new coronavirus cases and seven more deaths over the chants, stayed to his script when asked by reporters about the protesters.
“They want businesses reopened immediately, but that would cause the deaths of more Kentuckians,” Beshear said. “Remember, we’re following the White House guidelines.  The White House has asked us to take the steps we have made, even though we made them oftentimes earlier.”
He also noted there should be no mass gatherings. “If there isn’t social distancing, they’re spreading the coronavirus, and that’s really concerning.”
As for what he thought of the abortion chant, Beshear replied, “All decisions on what is an elective procedure or not are made by healthcare professionals. I have had zero input on those decisions whatsoever.”

More than 500 abortions have been performed in Kentucky since March 1, according to the Family Foundation.
Kentucky’s COVID-19 death toll raised to 122 with the seven on Wednesday. Of the new deaths four were in Jefferson County, one each in Hopkins and Simpson counties, and one county was unknown.
Beshear said the state is moving to a new system of tracking cases so, although they reported 88 new cases, bringing the total to 2,291, there will likely be another 50 added to the list.
He said the drive-thru testing facility in Frankfort has performed 100, 187 and 155 tests respectively in the first three days while the new operation in Kenton County had 200 in its first day on Wednesday.
The governor said he has been working with his counterparts in Ohio and Indiana, Gov. Mike DeWine and Gov. Eric Holcomb, respectively, throughout the pandemic on a regional strategy.
“We’re going to continue that cooperation in planning how we will eventually ease restrictions and open up the economy,” Beshear said.  “We do this thoughtfully to make sure that we don’t see a re-emergence of the virus.  Regionally, it is so critical, because if you live in northern Kentucky and Cincinnati is right across the river, we have to make sure that we are working together to ensure one area is on top of the virus and the other doesn’t bring it in.”
Although Beshear is a Democrat and the other two are Republicans, he says, “There hasn’t been one political moment in it.  Just three people trying to do the best they can surrounded by teams trying to do the best they can.”
Kentucky Lt. Gov. Jacqueline Coleman joined the briefing via Skype to talk about the Team Kentucky Fund, which is taking donations to be distributed to those impacted most by the pandemic, and that an application process will be released in the coming days.
More than 7,000 have raised $1.9 million with most of the donations less than $100, he said.  “We have also had some businesses and private donors step up with gifts from $10,000 to one million from the Kentucky Colonels,” he said.
Beshear also responded to news of a federal lawsuit being filed by three people who attended an in-person worship service last Sunday at Maryville Baptist Church in Bullitt County against being quarantined.
“There are so many different ways to worship and all but one church in this Commonwealth are engaged in them,” he said. “You can do it virtually, and you can do it at a drive-in service.  In many states they are not allowing drive-in services.  This opportunity to worship, which is so important, is still there. We just ask people to choose one of the versions that doesn’t spread the coronavirus.” 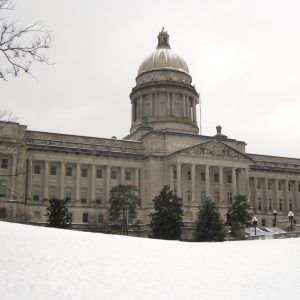 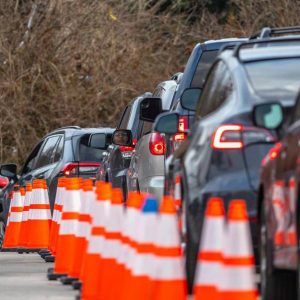