GONE TOO SOON – In the above photo that was given to the paper from BCMS Principal Travis Earlywine, is the scene at the school on the evening that Emily passed away. Students, teachers, family, and friends gathered in to remember a classmate and friend to all. PHOTO SUBMITTED I For The Citizen

PARIS, KY – Nearly five years ago, on May 23rd, 2015, Bourbon County eighth grader Emily Sams, riding in a westbound pickup truck with her parents, Jeff and Shella Sams, on that early Saturday morning, was on her way to Louisville for a youth volleyball tournament. Emily and her parents never made it to Louisville that day.

Just like any other weekend, Emily was gearing up to play in an elite volleyball tournament with her Lexington United Volleyball (LUV) Team when life as the Sams family knew it, changed forever.

Around 7:30 a.m. Emily, with her grandparents following behind their vehicle, lost her life in a crash that happened near the Scott-Fayette County line that morning, after a car, according to reports, dropped off of the left shoulder of the road and over-corrected, hitting the side of the Sams’ pickup. That caused both vehicles to run off the road and crash. Emily didn’t survive.

It was a sad day in Bourbon County when the news started spreading around about the crash that killed the young and promising 13-year old (at the time) sports star, who never got the chance to show off her talents at the next level. The death caused heartbreak not only throughout Paris but throughout the state and all over social media. 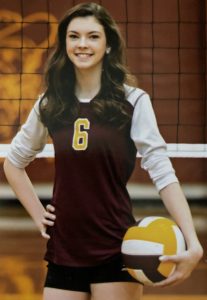 SHE HAD GOALS OF PLAYING AT THE NEXT LEVEL – Emily Sams, who was killed in a car crash nearly five years ago, was a member of the Bourbon County Middle School Volleyball and Basketball Team. She’s shown here pictured in her Volleyball uniform, where her Mom said she was hoping to play at an NCAA Division 1 School one day.
PHOTO SUBMITTED I For The Citizen

“When I got that call about Emily Sams I was in disbelief. I will always remember where I was. I was coaching 3rd base in a travel baseball tournament when Dana Hill (Cane Ridge Principal) called to tell me about the accident. I simply could not think straight,” recalled Bourbon Middle School Principal Travis Earlywine. “I had the pleasure of getting to know Emily as she went through BCMS. She was a child that always wanted the people around her to smile. I was honored to speak at her funeral even though it was one of the most difficult things I’ve ever done. Emily was special. I think about her all the time. Many times I see students doing things that remind me of her. She was a sweetheart and we will never forget her.”

Her Mom and Dad, both injured in the crash that dreadful morning that saw Shella spend many weeks in the hospital, knew they had to do something to keep their daughter’s memories alive.

After the 2015 death of Emily Sams, a scholarship was created in her memory.

“Her goal was to play college volleyball at a division one university,” her Mom said through email. “She left a legacy of hard work – not only in athletics, but also in her academics as well as her community involvement. This scholarship is a way of honoring her infectious enthusiasm and spirit.”

“When she was in the sixth grade, she and some friends asked me if they could re-create on old SNL skit in front of the whole school. Of course I said yes. They did a skit where they cheered at a chess tournament. The whole school was in tears laughing.” Earlywine continued by saying that she had this energy and glow about her that you don’t often see. “She was nice to her peers and had a very sweet innocence. I enjoyed watching her play volleyball and basketball. Every time I was in the gym, she would asked me to play “Holla back girl” by Gwen Stefani. She would sing every word as loud as she could and watch everyone laugh.”

Katie Ritchie Is The Scholarship Recipient

Bourbon County High School senior Kaitlyn (Katie) Ritchie is the 2020 recipient of the Emily Sams Memorial Scholarship. Katie is the daughter of Shannon and Ted Ritchie, and the sister of Brittany Ritchie. 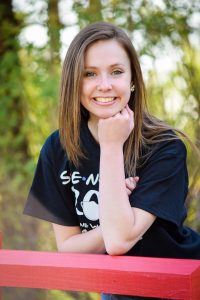 SCHOLARSHIP RECIPIENT – Bourbon County senior Katie Ritchie was the recipient of the 2020 Emily Sams Memorial Scholarship. Ritchie, who played volleyball and softball at BCHS, who will be attending Eastern Kentucky University, said that Emily will forever hold a special place in her heart. KRISTA BARNETT I For BCHS Sports

“For Katie, volleyball was her heart and passion that has helped shape her into the leader and individual that she is today. She aspires to encourage her future students to find their passion that will help shape them into strong, independent individuals, as she is yearning to do so,” said Shella, who went on to say that Ritchie has excelled across all of the scholarship requirements.

“When I received the Emily Sams Memorial Scholarship, I was so surprised and overwhelmed with joy,” Ritchie said over a text message. “Emily was a former volleyball teammate of mine and I looked up to her, not only as a volleyball player but as a person as well. She always had a smile on her face, was always a happy girl, and was overall a joy to be around. As many know, volleyball is my passion and I have so much love for the game. Knowing that Emily loved volleyball just as much as I do, made getting awarded the Emily Sams Memorial Scholarship even more meaningful. Emily will forever hold a special place in my heart, and I hope to make her proud up in heaven!”

John 14:27 read, “I am leaving you with a gift—peace of mind and heart. And the peace I give is a gift the world cannot give. So don’t be troubled or afraid.”

The Sams family, which also includes Emily’s older sister Shelby (Doose) has taken those words to heart because when it comes to Emily, they love talking about her!

Congratulations Katie Ritchie and continue to rest easy from heaven above Emily, as your memory lives on! 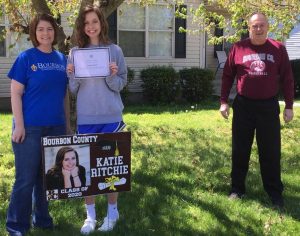 2020 EMILY SAMS MEMORIAL SCHOLARSHIP RECIPIENT – Katie Ritchie is shown in this photo with her Mom, Shannon and Head Lady Colonel Basketball Coach Bill Watson, who was Emily’s basketball coach when she played for the middle school team. BETTY WATSON I For The Citizen

EDITOR’S NOTE: Thanks to Shella Sams and Travis Earlywine for the help with the story. You can read the entire story in the Bourbon County Citizen’s Sports section tomorrow (5-7-2020) in their print or online edition.