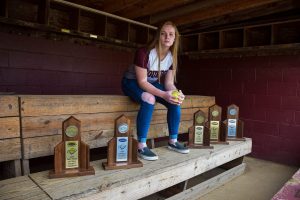 BARNETT PUT IN THE WORK – Bourbon County Lady Colonel softball senior Kaylyn Barnett worked out nearly everyday getting ready for her final season on the softball diamond with her team. The 10th Region reigning Player of the Year, was ready to make this her best season ever by breaking more records in her final year wearing her Colonel uniform. Because of COVID-19, Barnett’s outstanding high school career with the Lady Colonels is officially over, keeping her, as well as her teammates from adding more “hardware” to their trophy case. Barnett will play college softball at Georgetown College. KRISTA BARNETT I For BCHS Sports

From The Desk Of The Doctor Of Sports:

Didn’t Get Their Chance

To Finish What They Started

PARIS, KY – Starting out playing sports at an early age, you really don’t think about much other than playing the game and having fun with your teammates and friends. However, as you get older in your pre-teen days, sports become more compatible. Your intensity level begins to rise because you know that the time has finally come that everyone doesn’t have to make the team. Ok let’s be honest, everyone shouldn’t make the team. That’s another story!

Now, you’ve moved up to the high school level. It’s time to start getting serious about the game you’re playing and how much time and effort you’re going to spend on the athletic field, track, boat, computer, or courts to get better. They (Athletic Associations and schools) only give you four years to play a sport or sports while in high school and trust me, if you didn’t know, now you do, that it goes by really fast. Some, who decide not to play all four years, may only play three years … others will try two years and then there’s the ones that will wait around until their senior year to come out and play. “Quoting Kentucky Governor Andy Beshear, “Don’t be doing that!”

Yes, all athletes are excited when their season is about to start, and they can’t wait to start competing against the opposition. And to make it even more refreshing, for some, it’s their senior year. Their final time they will suit up for their high school team and the final time (for most) that it will be the last hurrah playing sports since they were kids. It never crossed your mind as a freshman. You think about it a little after your sophomore season but then when your junior season ends, you really start thinking … “Wow, we’re going to be seniors’ – I can’t believe it’s gone by so fast.”

Some Teams Did Finish

After a long but actually short summer, it’s finally here, your senior year.

You may have cheered or played on a fall sports team. They finished! Unless you were one of the remaining teams playing in the state basketball tournament, you had the chance to play or cheer on your winter sports teams. They finished too! Even the dance and cheer teams finished! They all got their senior night. 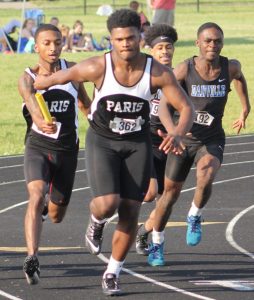 BARBER’S LAST RACE WAS LAST YEAR – Paris Greyhound track sprinter Matthew Barber, shown in the photo getting ready to take the baton from teammate Travis Strings during last season’s Region meet, has competed in every Class 1A state track meet while running for the Greyhounds at the high school level. Barber, a senior, was hoping to make it four years in a row but the cancellation of this spring sports season will keep him from doing that. He would’ve been Paris’ only senior track member (boys or girls). JENNIFER ARNETT I For PHS Athletics

Up next, spring sports.

For some, they’ve been waiting their entire athletic playing life for this moment to come. For others, it’s been a short period of time, but for all, there’s only three months (some four) left in their high school career and no doubt, they would like to go out with a bang. Heck, you wanna finish just like the other sports did. This is your time!

Unfortunately, this time around, their time never came!

The following press release was sent out by the Kentucky High School Athletic Association (KHSAA). Effective Friday, March 13, all sports, and sport-activities, regardless of season, are declared to be in a coronavirus dead period, congruent but not identical, with the provisions of Bylaw 24. These restrictions apply to all rostered KHSAA coaches (middle or high school, all levels, paid or unpaid), all rostered athletes at all levels (middle and high school), or those that have participated in at least one practice session with a KHSAA member school and yet may not currently appear on a roster.

Coronavirus? When did “it” become a member of the KHSAA?

Okay, with everything shutting down around them, it really didn’t come with a surprise that this spring sports season could be over. With COVID-19 spreading, everyone knew it was just a matter of time. “Hey, no worries, it’s only going to be for two or three weeks and then we can start our season,” said several spring sports athletes and coaches.

But after the two weeks, the “coronavirus dead period” was extended. Now, it was time to be worried, because COVID-19 took out “its” starter and brought in the ace!

We all heard through social media, “Will we even have a season?” “If we get back by May, maybe we can play for a month and then have a post season.” Yes, some still had hope, while others knew that as each day went by, their chances of playing their final season was running out of time.

Obviously, when one reflect back, they didn’t think about something like a “virus” would put an end to their senior season, they thought a powerhouse team or player, would conclude their days as a high school athlete.

Then it came. The press release that ended it all. Every team and individual participant received their final loss and it would be to COVID-19, a pandemic that was stacked from the top to bottom that no team or player could overcome.

The KHSAA press release read, With the announcement of the recommended closure of all K-12 schools to in-person instruction throughout Kentucky for the remainder of the school year, the KHSAA Board of Control approved the Commissioner’s recommendation and announcement by unanimous vote that the 2020 state basketball tournaments will not be resumed, and the termination of the Archery, Bass Fishing, Esports, Baseball, Softball, Tennis, and Track & Field seasons.

COVID-19 is a beast. Not only did it stop play of several big time sporting events all over the world, it closed businesses, people lost jobs and life as we all know it changed. That’s it … it’s officially over thanks to the Coronavirus Pandemic.

All You Have Now Are The Memories

All those years that you’ve waited for this one particular moment in your life is now gone and it’s something you will never be able to get back. Yes, you can do other things to celebrate your senior season, but let me be the first to tell you, a “virtual” senior night, is not like the actual senior night when you share it with your teammates, friends and “fans and family in the stands” on an athletic field. It’s that final moment in an environment that you will never experience if this was going to be your first and only season of playing sports. It’s a shame that this year’s seniors will not get that same feeling that I got 40 years ago when I played in my last baseball game or ran my final race on the track wearing that Paris High School uniform. Those memories can’t be taken away and trust me, I’ve cherished and talked about those times for the past 40 years!

Did I take things for granted when I played? Of course I did and to be honest, majority of us do when we’re playing sports because you will always believe that it will be there. 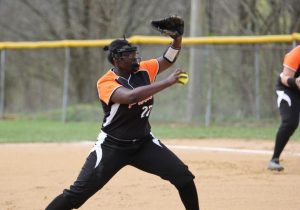 JACKSON WAS READY – Paris Ladyhound softball pitcher Manaiyah Jackson took over the pitching reigns last season for her softball team. After putting in the work during the off-season, Jackson, a senior, was looking forward to leading the Ladyhounds to a promising 2020 season. Sadly to say, she will not get her chance.       JENNIFER ARNETT I For PHS Athletics

Can’t believe that anymore, nope, especially if you’re debating rather or not you want to play or just wait around another year, because now we all know, waiting may not be an option. That’s why you should always give it your all and don’t complain and just go out there and do your best, but most of all, just play!

Think about it, Coach Nelson Faris’ Bourbon baseball team was loaded with great seniors and they had a shot to win their first region title. And I really don’t have to tell you how great of a senior class that Tony Sosby’s Lady Colonel softball team had. They were going to win the region title because they were focused ever since losing in the finals a year ago! Those are just two senior-led teams from this area that had a golden opportunity to do something special but will not get that chance. And let us not forget about the seniors that play individual sports, they too will miss out on their chance of winning some type of a title, rather it be to defend a title from a year ago or win their first ever title this season. No matter how we look at it, we will never know!

“COVID-19 has not only taken my senior softball season from me along with my friends but has also taken the last few months of my senior year away as well,” said Katie Ritchie, who was a member of the Lady Colonel softball team. “It sucks and has honestly hit me with all kinds of different emotions.”

Katie’s not the only senior that feels that way. Realizing that this is not about the underclassmen, because they still have their chance of competing as seniors (we hope), this is about the spring sports seniors of 2020. They are the ones that are hurting the most because they are the ones that didn’t get their final shining moment … they didn’t get their chance to finish! 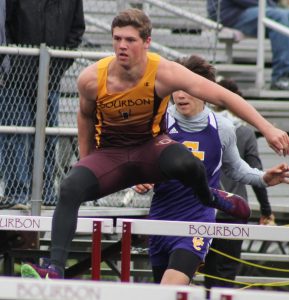 NO REPEAT FOR SANDEFUR – Colonel hurdler Jared Sandefur, as a junior, won the region title in the 100 and 300 meter hurdles during last season’s Class 2A Region 4 Track and Field Championship. With this being his senior season, he will not get the chance to repeat that feat from a year ago. KENSEY DENNINGHOFF I For BCHS Track

Again, thank you spring sports seniors for the memories and the opportunity for me to write about you over your athletic career.

Editor’s Note: You can read the rest of this story by the Sports Doctor inside today’s Bourbon County Citizen’s special section that honors the 2020 senior class and athletes. You can also view the entire story on the online edition at bourboncountycitizen.com