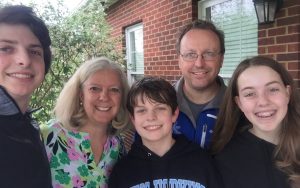 THE REASON SHE’S WALKING AWAY – Coach Candy Beauman, pictured second from left, is shown in this photo with her family, husband Bryan, along with their kids Christian, Luke and Bailee. In an email, Coach “B” said that her kids are getting older and now, it’s time for her to be just their mom. PHOTO SUBMITTED I For BCHS Dance

In The Footsteps Of Her Mentor

PARIS, KY – Putting everything she had into starting Bourbon County’s dance program and then building it into a successful one, 22 years later, Coach Candace “Candy” Beauman or Coach “B as her dancers called her, said that she has coached her last dance.

“Coaching the Colonelettes has been part of half my life, my entire marriage, and all three of my children’s lives. I would say the Colonelette schedule was also the Beauman family schedule. It was quite easy to bring my children to practices and games. However, now they are older, and scheduling has become very difficult, it’s time for me to be just their mom because they will be gone before I know it!”

Being a “Mom” is what Coach “B” was to every girl that danced for the Colonelettes and by reading their comments, a good coach and “mom” she most certainly was!

When It All Started

During the fall of 1997, when attending a Bourbon County Colonels football game like many others in the community, Coach “B”, who was new to the community as the art teacher at all four of the Bourbon Elementary schools, noticed that her new school didn’t have a dance team. 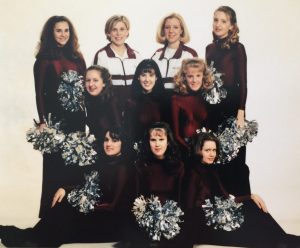 FIRST COLONELETTE DANCE TEAM – After many times of presenting her plans for the Bourbon County Colonelettes, Coach Candy Beauman and her Assistant Paige Mayfield Brown, was able to hold their first tryouts in April of 1998 After that try-out, the following girls pictured from front to back and left to right, made up the first ever dance team at Bourbon County. Pictured are Amanda Rhodus Cassity, Angel Stivers Daniels, Jennifer Taulbee McGlone, Patricia Davis, Kerri Buchanan Montgomery, Aleisha Rabon Smith, Meghan Crump Gray, Assistant Coach Paige Mayfield Brown, Head Coach Candy Beauman and Sonja Noria. PHOTO SUBMITTED I For BCHS Dance

“I am originally from Western Kentucky, where every high school has a dance team,” Beauman said through email. “I was in dance classes throughout my whole life and on the dance team during high school. So why not have another opportunity for girls to be part of a team right here in Bourbon County.”

After many times of presenting her program plans to (at that time) principal Ron Wigglesworth, AD Kathy Johnston and assistant superintendent Jim Burks, and convincing a friend (Paige Mayfield Brown) to help, she was able to hold their first dance team tryouts in April of 1998, turning her dream into reality.

“My main goals were to be a good role model while creating an environment where a young girl could gain confidence, close friends, and many high school memories,” shared Beauman, who continued on by saying that she enjoyed pushing the team over and over again till that point she finally had to say – it’s all up to you now! “To see them nervous before they perform and see them so proud of their hard work afterwards, is a wonderful feeling.”

Over the years as the leader of the Colonelettes, Coach “B” had many fond memories and she’s cherished every single one of them.

“I guess coaching for 22 years will get you a lot of memories.”

From her husband (Bryan) being the unofficial assistant coach, videographer, and music man for several years, to their trips to Walt Disney World (twice), New York City, Chicago, Indianapolis, Myrtle Beach (three times), and all over Kentucky and Ohio, were for some, it would be their first plane ride and first trip to the beach, a lot of memories were made over the years and the Coach felt that she would reflect back on some of those good times, although majority of her memories are really memorable feelings and emotions.

Her favorite memory came when the Coach and her two assistants (Tevis Isaac and Hollie Doyle) decided to perform with the team during their traditional Thriller Halloween Dance. “With crazy hair and makeup, no one in the stands realized we performed with the team until group pictures afterwards.”

Former Colonelette Will Take Over The Program

Tevis Isaac, a member of the Colonelettes from 2009-2013, as well as the team’s Assistant Coach over the past three years, will be the new dance coach at Bourbon County.

“She is very knowledgeable about the dance team world and has a passion and desire to continue moving the program forward while continuing to kept several traditions,” said Coach Beauman. “I’m so excited for her and know I am leaving the program in great hands.”

Coach Isaac said that she is so thankful that she took the opportunity to tryout for the dance team in 2009, because she grew so much as a young woman and built confidence and friendships through her four years on the team.

“Candy was my coach and mentor while in high school and she still is a great mentor to me today. I look to continue many great traditions she has created for the dance team. I hope to be half the coach that she is.”

For Her “Last Dance”

Coach “B” shared her final days as the Dance Team Coach at Bourbon County with a “front porch” banquet for her “last” team because of COVID-19, ending a ride that she took two decades ago and turned it into a ride of a lifetime.

“I am not sure I could have found anything better than to be part of the memories of young women’s high school lives. The support I personally received over the years from my husband and children, the business community, the faculty, and staff at all the Bourbon County Schools, and the many dance parents and families is overwhelmingly … the best feeling of love and support a person can have.”

Start the music and close the curtains please. Before that happens, take a bow Candy Beauman, you deserve it, for a job well done!