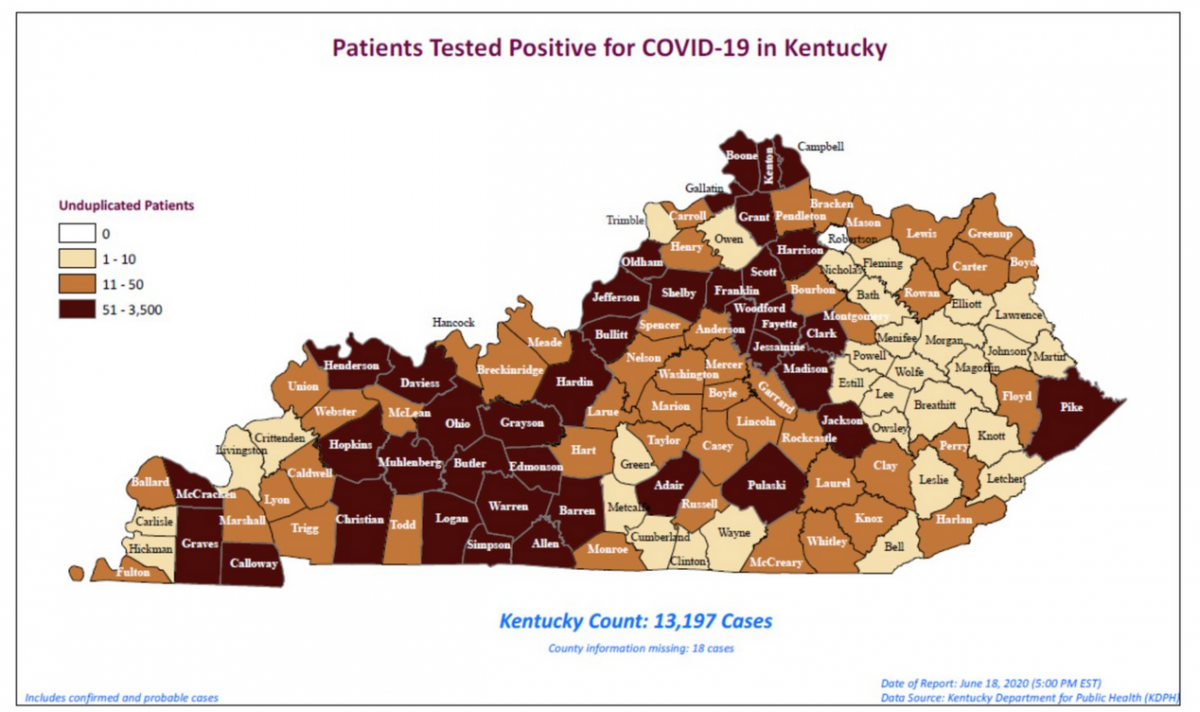 FRANKFORT, Ky. (KT) – Kentucky has now had more than 13,000 cases of the coronavirus, according to figures released Thursday by Gov. Andy Beshear.
A total of 234 new cases were reported to state public health officials, bringing the total to 13,197.  “We have to make sure that we can keep our number of new cases in this type of range,” Beshear stated.
“To give you an idea of how that compares to a couple other place that are struggling right now, Arizona is about seven million people, maybe just a little bit more, compared to our four-and-a-half million people.  They had 2,500 new cases on Wednesday, 2,300 on Tuesday.  Think about it, that’s over 10 times our cases.”
He says despite no decline in cases, the reopening of Kentucky remains on track and the healthcare system still has the capacity to take care of people.  Still, “It is a very fragile place where we are.  We need to continue to follow the Healthy at Work rules, we need to continue to wear masks.”
Three more deaths were also recorded, which makes it 520 since the pandemic began.  They occurred in Jefferson, Logan, and Perry counties.  The 520 reflects the removal of a woman who an investigation determined had recovered from COVID-19, before she died of other causes.
During his press briefing, Beshear also gave updated information regarding the executive order he signed three days after taking office last December, automatically restoring voting rights to felons who had completed their sentences after being convicted of non-violent, non-sexual offenses.
“At that time, we estimated that about 80,000 people got their voting rights back, right then,” he said.  “As of today, because that executive order was automatic, and restored rights every day that somebody completed that sentence, 175,053 ex-offenders have now had their right to vote restored.”
He reminded them that they still have to register to vote and that the deadline for the June 23 primary has passed, but there is still plenty of time to register for the November General Election.
Friday is the final day those having problems with their unemployment Beshear benefits can meet in person with adjudicators at the Cabinet for Health and Family Services Building, 275 East Main Street in Frankfort.  But that is not the final day such help will be available.
“Our hope, while it won’t be next week but potentially the week after, we can have people back in areas around the state able to help them, so that people don’t have to travel.”