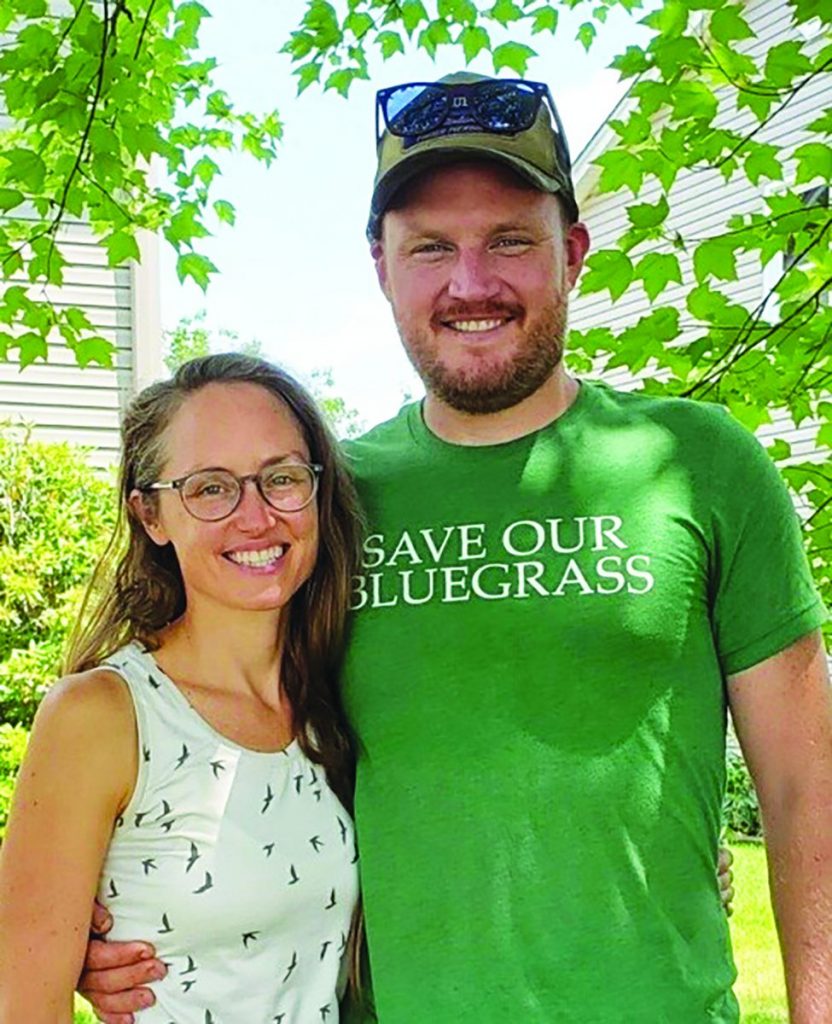 JUST ENGAGED: noted bluegrass musician Arthur Hancock, IV is shown here with his fiancée Jessie Wilder at their “Switzer Family Farm” near The Switzer Covered Bridge in Franklin County. Hancock was recently named to the board of the International Bluegrass Music Association Foundation. (photo submitted)

The 34 year-old has recently been named to the board of the Nashville-based International Bluegrass Music Association Foundation. He’ll serve a three-year term, starting this month. Hancock, who won’t deny a love for great country music, always says “bluegrass saved my life.”

And, once considered by many “The Most Eligible Bachelor in Bluegrass,” Hancock recently announced his engagement to Jessie Wilder of Woodford County. Jessie is well known in her own right as executive director of Bluegrass Conservancy, which is dedicated to protecting Bluegrass farmland through permanent conservation easements.

Hancock said he is now living in downtown Frankfort, “so you know I had to buy some land immediately,” he laughs. He and Jessie in partnership with long-time friend John Nickels are working tirelessly on developing “Switzer Family Farm,” which touches the historic Switzer Covered Bridge over North Elkhorn Creek in Franklin County. Ultimately the 17-acre “baby farm” will become a music performance venue and a campground, in addition to a “you pick” agribusiness, Hancock said. He and Jessie have their hearts set on hosting the first ever “Bridge Day” music festival next spring or summer.

Arthur stopped his tractor while baling hay last week, long enough for a phone interview with The Citizen.

Widely known as the original leader and founder of popular bluegrass band, “The Wooks,” nowadays Arthur is teaming up with close friend Chris Shouse of Irvine via Owsley County, famous fiddler Katie Penn and others in a new bluegrass band called “Hancock & Shouse.”

Hancock recently produced and performed on a country music release with Jesse Wells (fiddle player for Tyler Childers), J.T. Cure (plays bass with Chris Stapleton), and Miles Miller (Sturgill Simpson’s drummer), but when anyone asks him to declare his favorite genre, he says simply “I like to play Kentucky music.”

Hancock is mainly playing only guitar, having done some damage to his hand from thousands of hours of high quality banjo picking. He still remembers arriving via canoe, with a banjo around his neck, to perform at a Friends of Stoner Creek fundraiser picnic in Paris a few years ago.

He insists he’ll always keep one foot in Bourbon County, where he grew up on his dad’s (Arthur, III) internationally renowned Stone Farm thoroughbred operation. Arthur, IV worked at the farm off and on, for over 12 years. “It was an honor to work with great horses and great people,” he says. As for Switzer Family Farm, “We’ve got a lot of wildlife, but no horses,” Hancock laughs.

To local fans of his “Stoney Point Jamboree” events on Stoney Point Road here in Bourbon County, Hancock says don’t lose hope. He had developed a serious following, with some 15 bluegrass concerts in recent years at an old tobacco barn on Stone Farm. “Don’t be surprised if Jessie and I don’t host some more of those (shows) sometime in the future,” he says. “We know they were special to a lot of people.”

“It was sad to leave Bourbon County,” Hancock admits. “But I really look forward to coming back every time!” Be sure to congratulate Arthur on his engagement and his prestigious IBMAF board appointment when you see him sometime at Lil’s Coffee House, for instance, in downtown Paris. Meantime, he hopes everyone will follow him and Jessie on Facebook at “Switzer Family Farm,” and on a soon to-be- developed website.