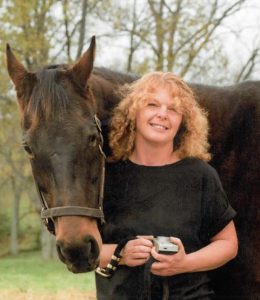 She was nationally known as the heart and soul of “Our Mims Retirement Haven (OMRH),” a celebrated non-profit which she and her husband Pete built for thoroughbred racing mares, some famous and some not, on their farm near Ruddles Mills. Over the years Jeanne and her devoted staff, including many volunteers, have cared for 44 mares, and, one very famous, stakes winning gelding, “Elmhurst.”

The farm was named after “Our Mims,” a celebrated filly Jeanne first noticed on tv when she was a young girl growing up in Rochester, NY. Our Mims, the 1977 Eclipse Champion three year-old, is buried in the storied equine cemetery at Calumet Farm. Jeanne’s long love affair with Our Mims is the subject of a documentary, “One Day,” released in 2015. OMRH was named 2012 “Farm of the Year” by the Paris-Bourbon County Chamber of Commerce.

Jeanne’s tireless passion for her mission was noticed by admirers far and wide. Included is David Pope of Bourbon County’s Siena Farm, one of many loyal patrons of OMRH. “Jeanne was an amazing lady, blessed with a spirit of loving and giving,” Pope said. “She loved her family, she loved her horses, and she loved giving everything she had to both.”

“Jeanne was the most wonderful person, with the biggest heart, I ever met,” said Ann Cheek, OMRH Director of Barn Operations. “We’re all rescues, at Our Mims, including me. Jeanne’s promise to Our Mims was to help aged mares. She had definite plans for this place to continue, and as long as we have good donors, we will carry on her mission,” Cheek said.

Jeanne’s spirit, dedication, and kindness shone brightly throughout her whole life, as a wife, a mother, and a friend. Her passion for her loved ones and those in need was unmatched. Her legacy lives not only in the hearts of those she touched, two-legged and four, but in the way she shaped the world for the better.

Details for her memorial service will be announced at a later date, and can be found on OMRH’s Facebook page or website.

In lieu of flowers, contributions to OMRH are encouraged.