By LARRY VAUGHT | For The Citizen 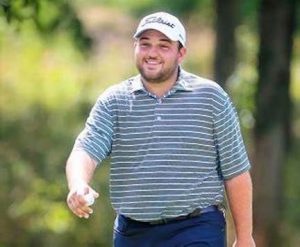 Cullan Brown seemed to always have a smile on his face like he did at the 2019 Barbasol Championship. (Gary Moyers Photo)

The death last week of 20-year-old Cullan Brown obviously touched the golf world in a big way because of his immense talent on the course.

He was a former Kentucky state high school champion and two-time state runner-up at Lyon County. He had a terrific freshman season at the University of Kentucky and then even made the cut in the Barbasol Championship last August in his first PGA Tour start and finished 10-under par for the tourney before finding out a few weeks later he had a rare form of bone cancer.

Brown made an impact on everyone who knew him on or off the course because of his personality and love for life.

Just ask Grace Gorrell who teaches an leadership studies class at UK. She had Cullan in class in the fall of 2018. However, once you know Brown, you have a lifetime friend.

“I have over 60 students per semester in my class so it is hard to get to know them all on a personal level. I was blessed to get to know Cullan because as an athlete he had to be gone and he would always make sure to meet with me one on one to catch up,” Gorrell said.

She often exchanged text messages with Brown the last year while he was undergoing chemotherapy and battling cancer.

“The last time we texted was mid July. That is when he shared how much it had spread and said that the chemo was much harder on him (than expected). But he ended the text by saying he really couldn’t complain because he could still get around,” Gorrell said. “Always found the positive.

“I can promise you when I am sharing my students examples of a good servant leader, it won’t be many of our current elected officials but instead I will be talking about Cullan.” ️

She posted on social media that was a “low key guy always willing to share his perspectives” in class. 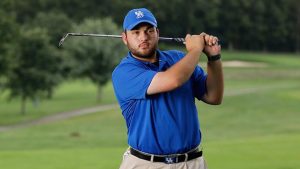 “He was always early so I loved sitting down and solving all the world’s problems with him. He always had a book with him,” she said. “He never told me what an amazing golfer he was. It was others that told me.

“He just made you feel comfortable. He was humble and kind. As I started following his golfing career I found out he was quite the character that brought joy and laughter to his teammates and opponents. He was a good guy that left all who knew him way too soon. If our world was full of Cullans it would truly be heaven on earth.”

“To cross paths with someone like that is amazing. Someone of that caliber who was so mature beyond his years,” Koett said. “How blessed are all of us who had the opportunity to know the young man. We are all truly richer from having known him.”

Koett remembered when his wife and mother-in-law came to the tournament at Champions Trace in Jessamine County. They were going into the clubhouse as Brown was leaving. He opened the door for both of them.

When they came to the media center to see Koett, Brown was leaving and they told Koett what a nice young man he had on his staff.

“I said, ‘Honey, he is a golfer,’” Koett laughed and said. “He came over and they were just floored at how nice he was and what a gentleman he was. He just had values and virtues that are lost in today’s age. I was always impressed at how strong he was in his faith and he was not afraid to share that.”

Koett remembers how media members who had not been around Brown before just “fell in love” with him during the tournament. Former PGA and British Open champion John Daly played in the tournament but Koett said there were many more requests to interview Brown than Daly.

“He just had that folksy charm. Every interview he did was special because of that great sense of humor he had,” Koett said. “That smile just never left his face and the fact he happened to be just an incredible golfer only made him more lovable.”

Koett often checked on Brown the last year but now regrets that he had not been in contact for about six weeks before Brown’s passing.

“We had even talked to him about starting our tournament off by hitting the first drive this year before we had to cancel (due to COVID-19) because his doctors felt he was going to make a full recovery and even be able to play golf again,” Koett said. “The pain of his passing for all of us is just unreal. Even after his diagnosis I never met anyone more positive. It was never if I beat this, but once I beat it these are the next steps in my life. He always found the positive.”

That included teaching his UK golf teammates some of his culinary skills during his one year at Kentucky. His former teammates now hope to find a way to create a memorial fund at UK to honor him that could include a cooking challenge.

Both Castle and Wenzler were freshmen last season and met Brown for the first time during a team visit to see him at the hospital in Lexington.

“I remember one of our seniors asked him how he was doing. He said, ‘You know, I really can’t complain.’ I will always remember that. When people ask if I knew Cullan, I tell them that story. For someone in his situation, the way he was able to stay so positive and so upbeat was just amazing,” Wenzler told Tom Mackin of www.usga.org.

Yes it was and Pam Stallings certainly noticed that during her son Stephen Stallings’ senior year when Brown was a freshman.

“He was gentleman in a kid’s body. He brought so much joy to everybody,” she said.

He did and perhaps more than anything he ever did on the golf course that will and should be his legacy. 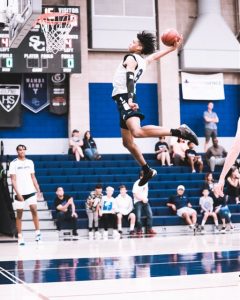 Guard BJ Boston has the size and skills that already have him projected as a top 10 draft pick in 2021. (Sierra Canyon Athletics Photo)

How good will freshman guard BJ Boston be for Kentucky if there is a 2020-21 basketball season?

Kentucky assistant coach Kenny Payne believes he could be very good because of his versatility and assortment of skills.

Payne likes his attitude as well.

“He is not insecure. If you are open, he will get you the ball,” Payne said. “He does not feel like he has to be the guy who scores every time.”

However, he can score in a lot of ways.

“He is really good in ball screens, really good off down screens, getting in the lane shooting,” Payne said. “He’s really gifted in isolation. He can get a basket from anywhere and he is long.

“Between him and (freshman Terrence) Clarke, they are both closer to 6-6, 6-7. That gives you a lot of flexibility with the skills they both have.”

Boston was the nation’s top-ranked shooting guard in his class and No. 5 player overall — John Calipari’s highest rated recruit since Skal Labissiere in 2015.

ESPN last week released a 2021 mock draft that had Boston as the sixth pick overall and Clarke No. 10. That would make him UK’s highest draft pick since De’Aaron Fox went fifth in 2017. 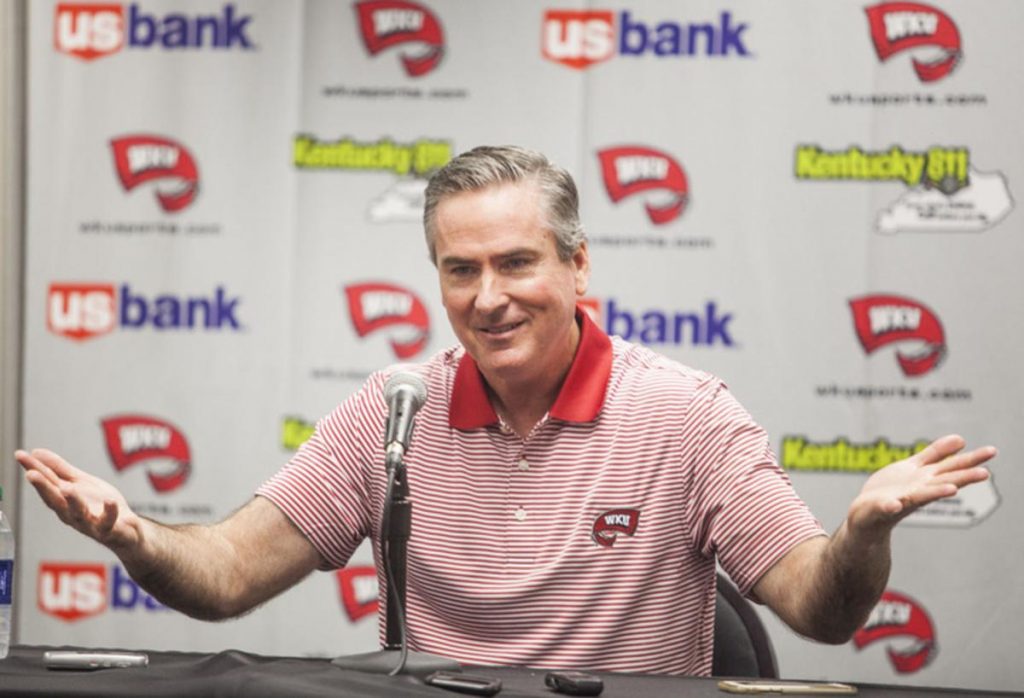 Western Kentucky coach Rick Stansbury has coached against Kentucky a lot and sometimes upset UK fans but he grew up in Meade County as a UK fan. (Western Kentucky Athletics Photo)

Most Kentucky basketball fans know Rick Stansbury from his years as an assistant coach and then head coach at Mississippi State or from his most recent job as head coach at Western Kentucky University.

But Stansbury grew up near Battletown — a small town in Meade County — and played his college basketball at Campbellsville College. He also grew up a Big Blue fan.

“I grew up like everybody else in Kentucky,” Stansbury said. “Back in those days almost every kid wanted to play for Kentucky. We had that (delayed game) replay on WAVE (TV out of Louisville). I would turn sports off at 11 (on the nightly TV news) so I would not know the score and watch the replay of the game. Nights I could not do that, I would just listen to Cawood Ledford (on the radio broadcast).

“There were not many Louisville fans then. When Louisville won that first national title (in 1980) I was in college. That is when things changed some and a lot of people gained a different respect for Louisville.

“But like most young men in Kentucky I grew up shooting basketball in a barn and grew up listening to Cawood and Ralph Hacker. There just was not a lot else to do.”

He said Battletown had about 50 people and that he actually grew up in Wolf Creek, a community of about 20.

“Where I lived it got dark and you did not see any lights,” Stansbury said. “But I loved those times. I worked on the farm all day and played basketball at night. There were no other distractions. Through the years I have just tried to get my players to work as hard as I worked. There are no magic pills or dust. Hard work is what it is all about no matter where you are coaching.” 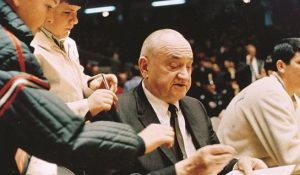 Strong, 90, was on UK’s 1951 national championship team before serving in the KoreanWar. He transferred to Eastern Kentucky for the rest of his collegiate career.

Strong knew how former UK coach Adolph Rupp could be but disagrees with those wanting to rename Rupp Arena because of the racist tag associated with Rupp.

“He was tough, demanding and callused at times but he was not racist,” Strong said. “He wanted to win more than anyone I had ever known.

“We became good friends when I came back to Kentucky and he always wanted to know how Henry (Iba) was. They were adversaries but also had great respect for each other.”

Quote of the Week:  “He can get you in Ohio, can get you in Florida, get you in California or Kentucky. It doesn’t matter. He does such a good job of connecting with these guys and their families and selling a vision. Coach  is an aggressive guy. He will get in your ear and he’s one of those guys that you know if he wants you, he’s going to really, really show it,” Kentucky graduate assistant C.J. Conrad on what makes coach Vince Marrow such an effective recruiter for UK.

Quote of the Week 2:  “I have a little sister (age 8) and I was thinking if something like this happened to her, I would hope there would be someone in my position that would do the same thing to make a little kid happy,” UK walk-on offensive lineman Ryan Bryant on why he cut his hair for the first time in 18 months and donated it to Wigs for Kids.

Quote of the Week 3: “We have a strong commitment from our medical and administrative staff in the athletic department that we expect to be met with the same commitment from our student athletes. Unfortunately, we’ve had a failure to do so. I’m incredibly disappointed and frustrated with what’s occurred,” Louisville athletics director Vince Tyra after 29 athletes in four sports tested positive for COVID-19 due to an off-campus party.