Baker, A Former Runner-up For

Will Lead The Greyhounds

After a lengthy process that saw several candidates apply for the position, Baker got the nod to replace former Head Coach Terence Brooks, who resigned during the offseason to take a similar position at nearby Harrison County High School, after seven seasons with his alma mater. 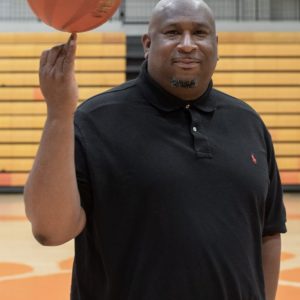 “I’m very excited to have a player and coach of George’s caliber to lead our program,” Paris High School Principal Joe Matthews said through email. “Coach Baker has already started to meet players, coaches, and families. He wants to develop young men into positive influencers in the Paris community by building a basketball program that will reach high levels of achievement through hard work and character development. We are excited to have Coach Baker leading our program into the future.”

The Early Days That Led Baker To Paris

Baker, who was born in Berea, KY but moved to Lexington with his family when he was two years old, gained the love of basketball by watching his father play in leagues and pickup games around Lexington.

“From that moment on, all I wanted to do was ball,” said Baker. In addition to watching his dad play, Baker would sit for hours watching guys like Barry Bowman, Darnell Burton, and other Lexington high school greats hoping one day he could be half as good as they were.

Upon his arrival at Dunbar, he became a four-year starter, participated in the KHSAA State Basketball Tournament at Rupp, named All-state, and won the 11th Region Player of the Year award before ending his prep career as runner-up in the 1999 Mr. Kentucky Basketball race.

Following his high school career, Baker earned a scholarship to DePaul University and played two years for the Blue Demons before transferring to Georgetown College, where he was named an NAIA First Team All-American, a Mid-South Conference selection three consecutive seasons and winning Player of the Year honors his senior season within the conference. He finished his three years with the Tigers scoring 1,252 points and had a Georgetown career second best 626 assists and 225 steals.

Once his college playing days were over, Baker got the opportunity to continue playing basketball overseas.

“Seeing the world, while getting paid to do what I loved, was at that point the ultimate blessing. Now, I feel that it is my duty to take all my experiences throughout my playing career and give back to our youth. I am very passionate about helping young men and women achieve their dreams/goals.”

That blessing has now led the former “Human Highlight Maker” to his most recent stop on 7th Street and the residence of Paris High School.

Next Step, Coaching The Greyhounds

“For years, I have been aware of the basketball rich tradition here at Paris,” said Baker, when asked how much he knows about the Greyhound program. “Myrin Roberts and Terence Brooks to this day are well respected ball players who have gone on to become very high character role models in this community.”

Baker went on to add the names of Chez Marks, Alvin Sims, Clinton Sims, and Cory Dumphord, who are four of the top five leading scorers in Greyhound basketball history.

“Chez is one of the best shooters I’ve ever seen with my own two eyes, while Alvin was a guy I looked up to growing up. What he did here at Paris and at the University of Louisville deserves the highest of praise. His brother Clinton (Boston College/EKU) as well as hometown legend and Kentucky State University great Cory Dumphord were exciting players to watch!”

Once Baker heard within the basketball community in Central, Ky the Paris job was open, he applied and after a few interviews, he landed his first head coaching position at historic Paris High School, where Tradition Never Graduates! “I cannot express in words how happy I am to be a part of such a basketball rich program.”

Now that he holds the head position, Baker said that his approach to this season is simple, they are going to play hard, extremely hard!

“We will compete at a high level every night! This team will be in shape and prepared for battle night in and night out. We want to fast break every chance we get and let our defense create a good amount of our offense.” He continued by saying that he’s blessed to have assistants Marcus Ashford and Tyson Jones on his staff, who coach under Brooks the past seven years. “I have seen the work they put in and love that they sincerely care about the development of our young men. Them being familiar with all our returning players will be key!”

Baker will take over a Paris team that lost two key seniors in Jamaun Clark and Caleb Johnson, who nearly helped the Greyhounds pull off a first round upset of eventual district and region champion George Rogers Clark last winter. He will, however, return all-region performer and leading scorer Ricqiece Washington, who very well could be the best shooting guard in the 10th Region. 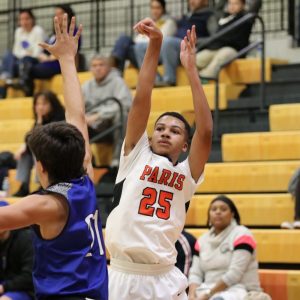 ROBERTS RETURNS – Greyhound junior Aidan Roberts, who saw some varsity minutes a year ago, will be only one of a few Greyhounds that will return this winter with some varsity experience. Coach Baker must replace two seniors who played a major role for the Hounds a year ago. JENNIFER ARNETT I File Photo

With that being said, Paris will need the leadership of Washington and others to compete in a very tough 40th district that the new coach is very aware of, where some call one of the toughest district in the state.

“I whole heartedly respect every school and coach in our district. There is great coaching, great team and individual play within our district that can only make us better. Win, lose, good, bad, or indifferent, we will compete every single game no matter who the other team is. Coach Brooks has laid a very solid foundation and our job as a staff is to take that foundation and continue to get better.”

Despite Covid-19 slowing things down, Baker is very eager and excited to get started with his Greyhound team that won the Kentucky Statewide Small School State Basketball Tournament just three years ago.

“I want to thank the Paris community for welcoming me with open arms. I take great pride in knowing that I have the support of the community and will enter this journey with extreme passion, great focus, and an intense hunger to carry on the awesome tradition that is Paris Basketball.