PARIS, KY – Back in April, Taesha’s mom Stacey (heartbroken) said to her daughter, “Well Taesha, it’s official. The KHSAA has canceled all spring sports. So, unfortunately there won’t be a track season this year.”

Taesha replied by saying, “Yeah, I figured that would happen any day now.” But it’s what she did next that convinced her parents they have a special athlete that’s deeply committed.

Taesha turned around and headed upstairs to her room after hearing the bad news. Minutes later, she returned with her workout gear on. “I’m ready to go do my workout. Let’s go!”

From that point on, Taesha (aka #sweetfeet) hasn’t stopped. 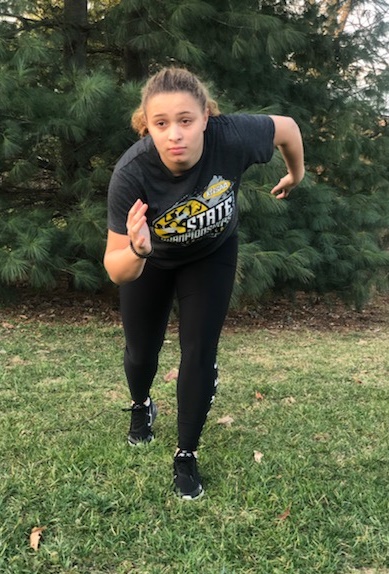 JUST CALL HER MISS DEDICATED – Winners work to get better and Paris’ junior sprinter Taesha Speaks, the reigning Class A State Champion in the 100 and 200 meter dash, has never stopped training despite losing her entire sophomore outdoor season because of the Coronavirus. She was also the second fastest indoor sprinter in the state a year ago regardless of class. STACEY SPEAKS I For PHS Track

Speaks Will Not Slow Down

Two years ago as a freshman, Taesha became the first female sprinter from Paris and the County of Bourbon to win a state title within the same season in the 100 and 200 meter dash. Not only did she win, but she also blew out the competition in both Class A events that included a reigning state champion and runner-up among the field.

She continued her brilliant freshman season with an outstanding summer that saw her qualify for the Junior Olympics for the second consecutive year. And then, her name really blew up when she was ranked as the third fastest female sprinter in the state of Kentucky, regardless of class, after her sensational indoor season her sophomore year. A year that saw her qualify for the New Balance Indoor Nationals that highlights the top high school sprinters in the nation and world. Unfortunately, she didn’t get to compete in the event because of the Coronavirus Pandemic.

Taesha still had hopes of running the KHSAA outdoor season but in the back of her mind, she already knew her spring season wouldn’t take place, ending what could’ve been a record breaking year for the Paris sprinter, who was running fast enough to break the long standing 1A records in the 100 and 200 meter dash.

“I was definitely looking forward to running last spring and summer, and when it was canceled, it was pretty devastating. We (Ladyhounds) had trained hard and prepared for that season for months,” said Taesha. “We felt pretty confident going into it that we would be able to do well as individuals and as a team.”

Taesha went on to say that not being able to defend her state titles during the Pandemic season was hard because she felt like she still have a lot to prove. “My freshman year was a very successful year, but I feel like I have improved since then and have a lot more in store for the future.”

Needless to say, it’s still been a tough pill to swallow knowing that Speaks had a shot to win state titles four years in a row in her specialty events, which would’ve marked the first time a female athlete in Kentucky would have accomplished that remarkable feat. But instead of hanging her head, Taesha didn’t stop, although she admits, it hasn’t been easy to stay motivated.

“It’s been pretty hard staying motivated because of all the negative things happening around us right now, but I know all of the hard work will pay off in the end.”

Even though she didn’t compete last season, Taesha has continued to train the same as she would have if there was a season – just to stay in shape and keep a routine. And there are reasons why she will remain focus and continue to get better by working hard every day. 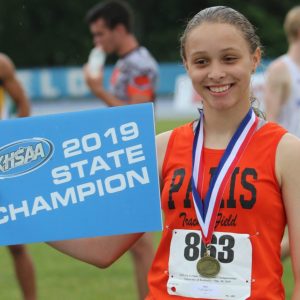 FRESHMAN CHAMPION – Ladyhound junior sprinter Taesha Speaks held up that signature KHSAA sign that signified her state championships she won her freshman season. Speaks won the Class A 100 and 200 meter state title back in 2019, just missing the state record in both events. Hopefully, after losing out on her entire sophomore outdoor season because of COVID-19, she will get her chance this spring to break those marks.
JENNIFER ARNETT I File Photo

“I know other people are working just as hard for the upcoming season, so I can’t let the negative things going on get to me when there is work to be done. And I have goals.”

Some of those individual goals that Taesha had set for the upcoming season are to break 25 in the 200, go under 12 in the 100, and hopefully, win some state titles. For the team, she’s hoping they place high and possibly win state titles in their relays. “With Zoe (Strings) being a senior, it’s definitely something we will be working for.”

Taesha, as well as some of her Ladyhound teammates, normally prepare for the outdoor season by competing indoor but as of right now, some of the big time indoor events that Speaks shinned at last winter have been canceled but she’s still hoping they will get to run some indoor track.

“If the entire indoor season does get canceled, we will have to continue to train. Indoor sets you up for outdoor and helps you get a feel for the rest of the season, so hopefully we get to run.”

Last week, the KHSAA gave the go ahead for winter sports to start practicing and competing. If nothing else, that’s a good sign that things are moving forward. It’s an opportunity for Speaks and her teammates to run again, even though Covid-19 could still come into play and Taesha knows all too well that it could be taken away from them again, although she’s keeping the faith just as she did last spring.

“If the season does get canceled or shortened, it would definitely be heartbreaking since I’ve already missed my sophomore year, and then I would be missing my junior year as well. It would feel like there was a lot of missed opportunities, but I know everything happens for a reason and in the end, there is always something better in store.”

“Hopefully, this season will continue as it normally would. If it doesn’t, then keeping my focus would be hard because it will now have been two seasons of training and not being able to compete. That would also motivate me more to keep working and to come back stronger my senior year because it will be my last chance to run in high school.”

Again, when it comes to Taesha #sweetfeet Speaks, she can’t stop and won’t stop … so, take that Covid-19! 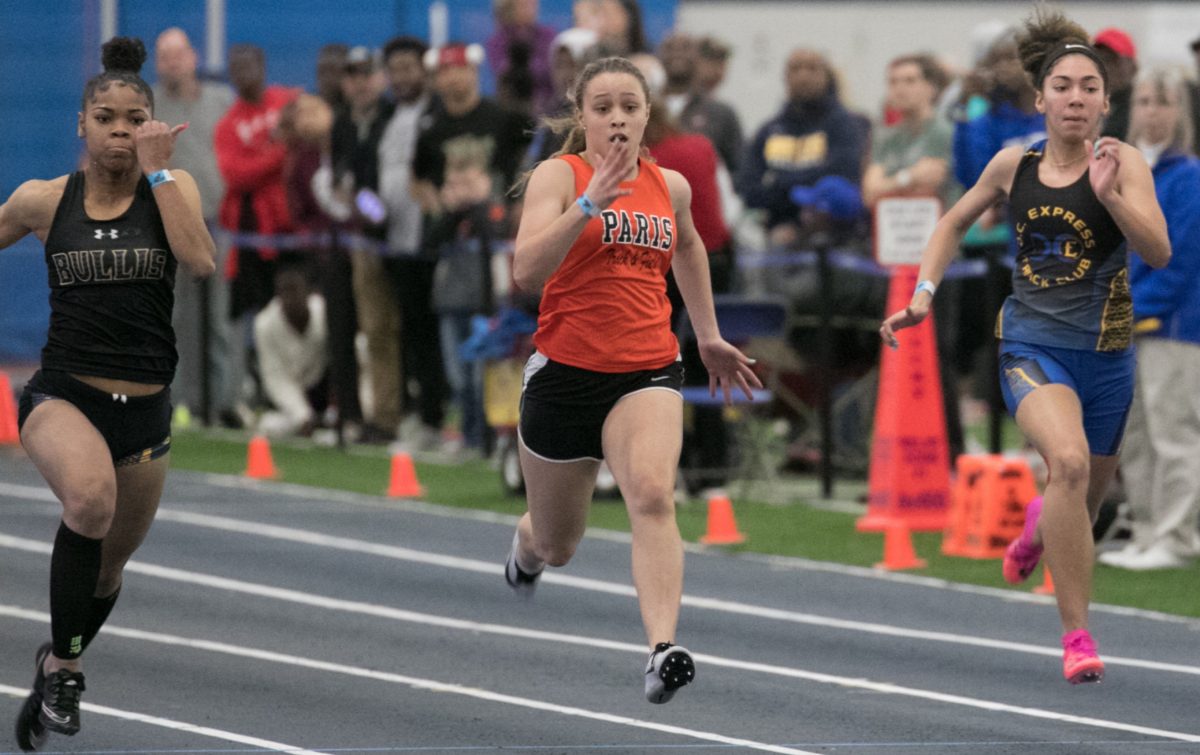 SHE’S STILL DETERMINED – So far to date, two huge indoor track and field meets have been canceled at the University of Kentucky, which a year ago, was the coming out party for Paris’ Taesha Speaks, despite being a state outdoor champion in the 100 and 200 meter dash. Speaks showed the entire state that she was a force to be reckoned with despite being from a small school. Her dream is to still compete at the New Balance National Indoor Championships in New York, where it will showcase the top sprinters in the nation. Covid-19 canceled the meet last winter. JENNIFER ARNETT I For PHS Athletics

On a side note: As good as the state sprinting champion is on the track, you should probably know when it comes to her studies, she’s pretty impressive, too.

Taesha, the daughter of Aaron and Stacey Speaks of Paris, currently has a weighted GPA of 4.2 and ranked one in her class, sharing that honor with her twin sister Amiyah, who in her own right, is an elite cheerleader. When asked about balancing her schoolwork with her track workouts, Taesha said that it’s hard sometimes to balance it out but she usually does most of her schoolwork before training and then on the weekends.

In addition, 29 schools have shown interest in Taesha based on her freshman season accomplishments and eight of those schools are D-1, headed by Louisville, Butler, EKU, Austin Peay, and North Carolina Wilmington to name a few, although this list will grow tremendously heading into her senior year.