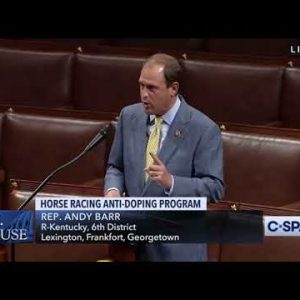 WASHINGTON, D.C. – Today, the U.S. House of Representatives and the U.S. Senate passed the Horseracing Integrity and Safety Act (HISA), legislation U.S. Congressman Andy Barr (KY-06) has authored, introduced and advocated for, in one form or another, for the last six years.  U.S. Senate Majority Leader Mitch McConnell (R-KY) led the Senate today in passing HISA, which also passed in the House as part of the year-end government funding bill. The legislation now goes to President Trump’s desk to become law.  Congressman Barr and U.S. Congressman Paul Tonko (NY-20) shepherded this final version of the bill through the U.S. House of Representatives.

“With today’s passage of HISA in Congress we are in the final stretch of achieving the most transformational and consequential reform of the thoroughbred horseracing industry since enactment of the Interstate Horseracing Act of 1978,” said Congressman Barr.  “For almost a decade, I have worked with industry stakeholders and my Congressional colleagues to build consensus around reforms that will protect equine athletes and strengthen confidence and international competitiveness in the sport.  I am proud to champion this historic, bipartisan legislation with Congressman Paul Tonko and Leader McConnell and I look forward to President Trump signing it into law.”

“Kentucky’s cherished horseracing traditions deserve to be protected. I’m proud the Senate agreed to my legislation to preserve our signature racing industry and the 24,000 workers who support it,” said Senator McConnell. “With the leadership of Congressman Andy Barr and the partnership of sport leaders, horse advocates, and fans, we’re one step closer to promoting fairness and safety across Thoroughbred racing. As Majority Leader, I made this Kentucky-focused legislation a top priority in the Senate. I look forward to this major advancement for our beloved sport becoming law.”

In August, Senator McConnell and Congressman Barr joined horseracing leaders in Lexington, the Horse Capital of the World, to announce an agreement years in the making to create national standards for the sport.  HISA will be an independent regulatory authority, similar to other professional sports, to enforce medication use and safety protocols.

The bipartisan legislation has earned broad support from trainers, breeders, jockeys, and other leaders of the Thoroughbred racing industry:

“The passage of HISA is a landmark moment for the Thoroughbred racing community’s ongoing efforts to ensure our horses are running under the safest and most transparent conditions possible and to protect the integrity of the sport for our athletes, horsemen and fans. The independent Authority established by HISA will bring a level of consistency and accountability that will improve our sport for years to come as they work to develop and implement uniform anti-doping, medication control and operational measures. Keeneland is honored to have been involved in this ground-breaking legislation,” said Keeneland President and CEO Bill Thomason jointly with President-elect Shannon Arvin.

“This marks the single most significant safety and integrity development in the history of Thoroughbred racing. This moment also demonstrates that great progress can be accomplished when the industry works together,” said Drew Fleming, President and CEO of Breeders’ Cup. “We recognize that there is more to be done and we look forward to working with our counterparts to build on this momentum and further improve the sport for generations to come.”

“This is the day that the members of the Water Hay Oats Alliance (WHOA) have long been waiting for,” said Staci Hancock, Managing Member of the Water Hay Oats Alliance. “Since 2012 our grassroots movement has supported the passage of federal legislation to prohibit the use of performance-enhancing drugs in horseracing. The Horseracing Integrity and Safety Act (HISA) brings much needed drug and medication reform, as well as national track safety standards, to our sport. It is with great pride and complete satisfaction that WHOA celebrates the bill’s passage. We thank Senate Majority Leader Mitch McConnell and House Sponsors, Congressmen Andy Barr and Paul Tonko, for getting it across the finish line.”