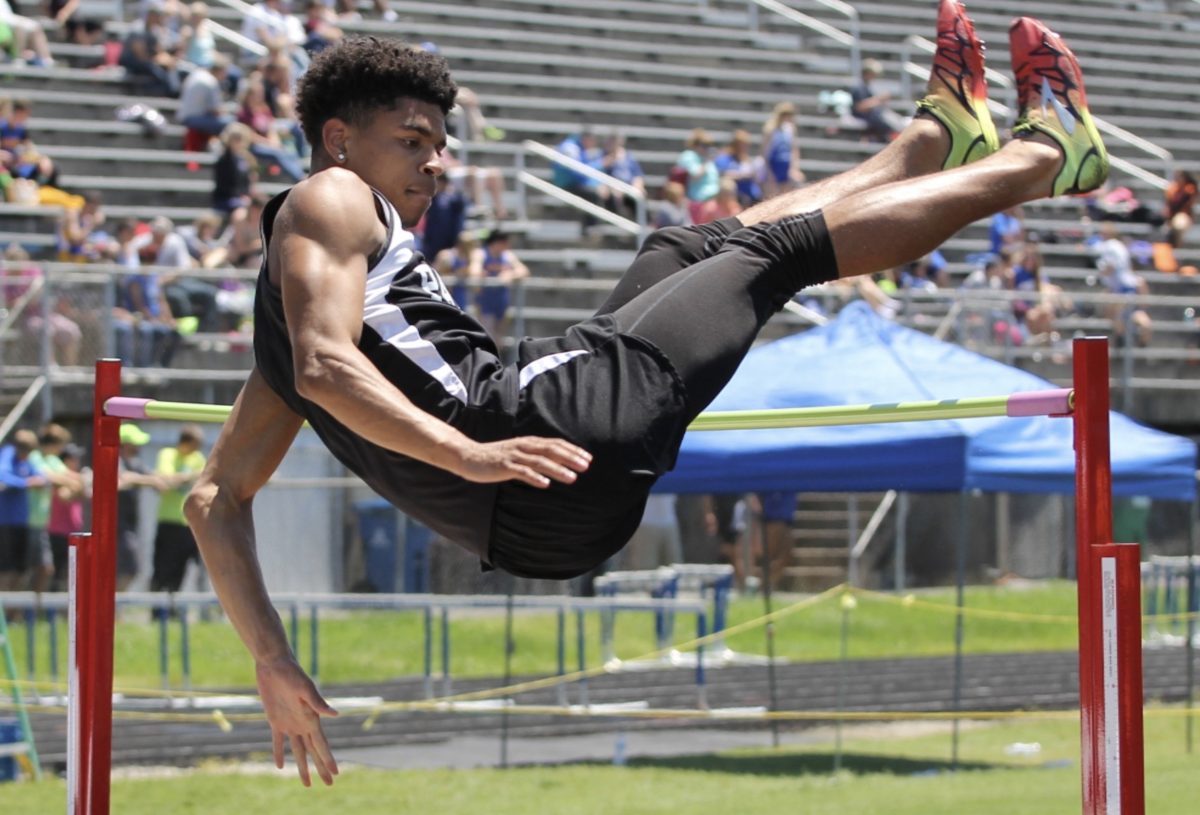 TRACK AND FIELD – 2-time KHSAA State participant in the High Jump and was the anchored on the 4×100 and 4×200 relay; Region High Jump Champion and Runner-up.    Photo by Jennifer Arnett

Saying Goodbye To A

PARIS, KY – First and foremost, let it be known, this is not a goodbye. This is to say thank you Mr. Wells. Thank you for coming into our lives and giving us sports fans joy while at Paris High School. Thank you for the memories that we all will cherish forever.

Over the past few weeks, family, friends, community of Paris, the media as well as the sports community around the region and state that knew or followed former Paris High School three-sports star Je’Kobi Marshaun Wells, have been mourning the sudden death of the young man that was named the 2017 Kentucky Statewide All A Classic MVP during the small school state basketball tournament that was won by his Greyhound team.

Outpouring of support for the family spread fast over social media sites when learned of his death and many today still can’t believe that the kid that always played the game with one speed (fast) and a smile, is no longer walking this earth with us.

On Monday, the Paris boys basketball team honored the late star with a moment of silence just before they would tipoff their 2020-2021 season against George Rogers Clark. During that moment, long-time Paris historian Eugene “Puck” Puckett read some of Wells’ accolades during his four-years as a Greyhound athlete.

And he had plenty.

As a member of Coach Brian Washington’s Greyhound football team, Wells, an All-District performer, finished his four-year career with 1,914 receiving yards, 89 receptions, 20 total touchdowns, 63 rushing yards, and 40 tackles, while helping the Hounds to a district title, 2 district runners-up, a region runner-up finish and 2 region semifinal games that saw Paris win 34 of their 47 games played over that time frame.

Playing for Coach Terence Brooks’ Greyhound basketball team, Wells finished his four years playing on the varsity team with 1,462 total points, 691 rebounds, dished out over 150 assists, over 150 steals, in 117 games. Wells helped Paris win three straight district titles, 2 region semifinal showings, a top 20 ranking in the state, the All “A” Classic Statewide Basketball Championship and 71 wins over his four seasons, with 50 victories coming in his junior and senior season. Wells finished as the program’s all-time 7th leading scorer.

On the track, running for Coach Washington’s Track Hounds, Wells was just as impressive as he was on the field and court. He competed in the state meet his junior and senior season in the high jump, 4×100 and 4×200 relays. Looking back at one state track moment, Wells with his Paris team running out of lane 9 in the second heat, saw the speedy Wells run down five runners that helped his relay foursome win the race. They placed 9th overall in the event after coming in ranked 18th. Wells was also a Region 5 Champion his junior year and region runner-up his senior year in the High Jump.

“Basketball will always be my first love, because that’s what I started playing first,” Wells said during a Q & A with the writer back in 2017. “But I do have a great passion for football, and I enjoy track and field.” 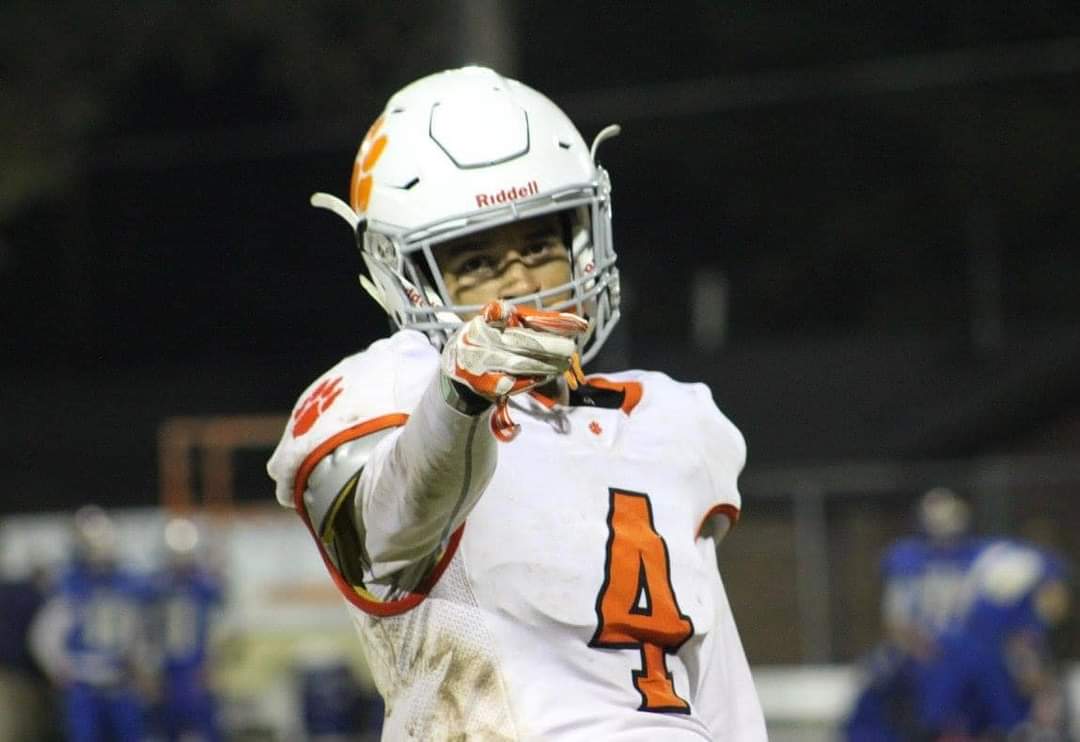 Obviously, Wells had many more highlights throughout his career that saw him make some big time catches on the football field, game saving baskets on the basketball court and he handled the anchor leg on the track relay teams like a pro. And he did all of this with a smile. He smiled because he enjoyed the moment.

One moment this writer remembers from Je’Kobi was during a Greyhound football game.

While talking to WKYT Sports Director Brian Milam on the sideline, Je’Kobi, who certainly wasn’t shy, looked in our direction and told Mr. Milam to pick up his camera because he was ready to give him a highlight.

Taking the swing pass from Quarterback Aaron Maggard, Je’Kobi, zigzagged, electric slide, did the wobble, the stanky leg and the tootsie roll on his way to the end zone, as he eluded every defender that approached him.

“Did you get that,” Je’Kobi said to Mr. Milam while leaving the field with his teammates. Milam replied, “I sure did!”

Seconds later, the Sports Reporter picked up his camera and said, “I’m out Doc” and I said “why” – he responded by saying, “I got all I need!”

One week later, the dazzling touchdown by Je’Kobi would be 27 Sports’ “Play of the Week”.

Yes, a young life gone way too soon but he left behind memories on the athletic fields and courts that will be remember for a lifetime. Mr. Wells is resting now, while making plays on the best team of all, Team Jesus!

Je’Kobi made his final catch, nailed his last basket, and anchored his final race as he was laid to rest on Tuesday, December 29, 2020 at Evergreen Memorial Garden after a beautiful homegoing celebration that was held inside Earl E. Redwine Gymnasium, where he made many of his athletic highlights.

During that same 2017 Q & A, Wells closed by saying, “I want to give thanks to my higher power. I do all things with faith and through Christ. With God, anything is possible!” 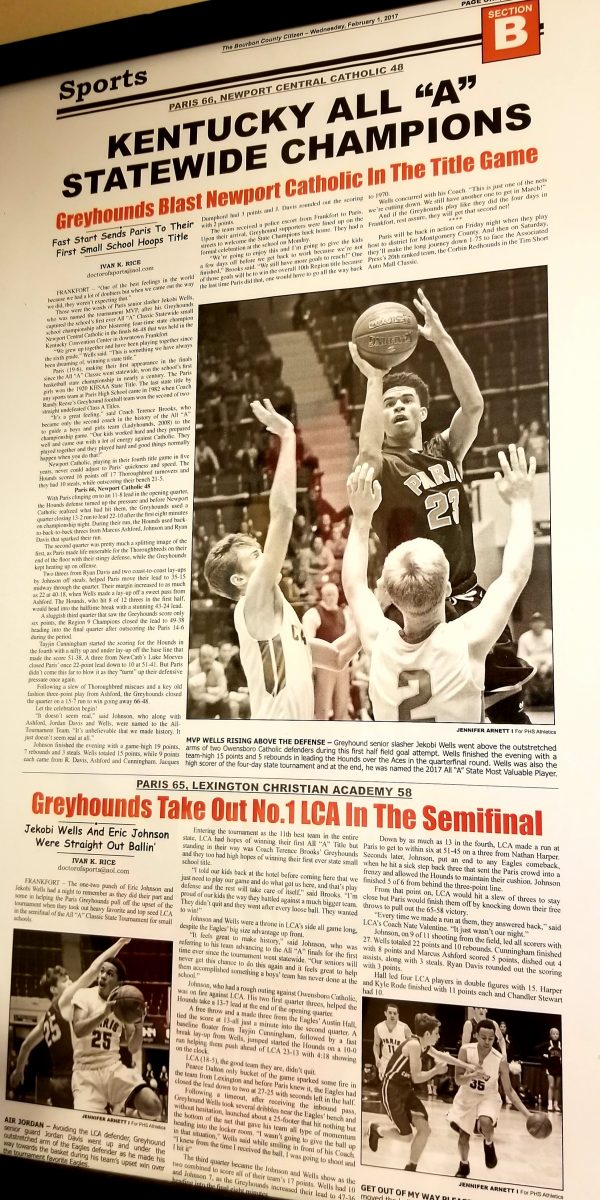