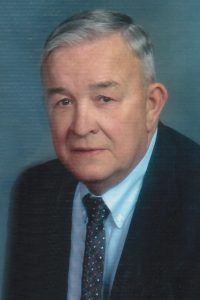 God needed a good man with two hard-working hands, so he called upon our Daddy.
Ray Lafayette Gant, age 83, died peacefully at home in Ruddles Mills on Thursday, July 29, with his wife of 58 years, Margaret “Peggy” Woods Gant, and children by his side.
Lafayette was born in Christian County, KY, to the late Roy Lafayette Gant and Evelyn (Johnson) Gant Lucas. Along with his parents, he was preceded in death by one infant daughter, Evelyn Frances Gant, two brothers: Bobby Gene Gant and Larry Junior Lucas, and a dear son-in-law, Jerry G. Deaton.
Lafayette lived in Muhlenberg County as a child. He graduated Paris High School and attended Maysville Community College. He also served in the United States Navy before returning to Paris.
Lafayette was humble, kind, and generous to people from all walks of life. He never met a stranger, and did his best to make those around him feel welcome. He often invited people to our home saying, “We’ll treat you so many different ways, you’re bound to like some of them!”
Daddy taught us the importance of hard work, honesty, and treating others as we would like to be treated. He was an Allstate Insurance agent, although he often joked, that he “sold insurance so he could afford to farm.” Almost every weekday afternoon he arrived home from Allstate only to hustle and change clothes to begin working on the farm. At Allstate, as a Senior Account Agent, he had the highest customer retention in the Indianapolis Region for over half of his 30 years. He always said he didn’t have insureds but friends. We often helped him make sure each of the over 2,000 families with insurance with him got a hand-addressed Christmas card, not from Allstate, but from our family.
He was a long-time member of the Paris Church of Annunciation, but also frequently attended Our Lady of Guadalupe in Carlisle, and Saint Edward’s Catholic Church in Cynthiana. He was also a long-time member of the Paris City Club and the International Order of Odd Fellows, the Central Kentucky Knife Club, Knights of Columbus, and was a Kentucky Colonel.
In addition to his wife, he is survived by his children, Mary Gina Connor, Patrick (Robin) Gant, Susan Gant; Kelly Deaton (Tommy) Tolliver, and Jeannie (Curtis) Lewis; his grandchildren, Katie Connor, Nathan Connor, Daniel Gant, Megan (Orie) Williams, Jonah Gant, Britney (Josh Copher) Turner, Evelyn Deaton, Tracey Deaton, Brad Lewis; and four great-grandchildren David, Derek, and Maggie Williams and Aria Copher.
He is also survived by two beloved sisters, Brenda Jewel (Jim) McElroy, and Donna Gail (Michael) Stump, and a special friend, Tony Snapp.
Pall bearers were: Daniel Gant, Jonah Gant, Nathan Connor, Orie Williams, William Gwinn, Lafayette Gwinn, and Tommy Tolliver, and Josh Sargent
Honorary pall bearers were: Eddie C. “Buddy” Roe, Jim McElroy, Michael Stump, Curt Lewis, Jim Bryant, Marion “Bud” Wells, George Pennington, Doug Gaunce, Frank Cartmill, Denny Carpenter, Charlie Collins, David Hardin, Clyde Taylor, and the members of the Paris City Club.
Visitation was from 5:00 to 8:00 p.m., Sunday, at Hinton-Turner Funeral Home with Rosary at 7:30 p.m., Mass of Christian Burial will be said at the Catholic Church of the Annunciation on Monday, August 2, 2021, at 1:00 p.m., followed by interment at Mount Olivet Cemetery.
Memorial donations can be made to Saint Jude Children’s Hospital or Bluegrass Care Navigators. www.hintonturner.com