Carrie Courtney Fletcher and Heather Courtney | For The Citizen 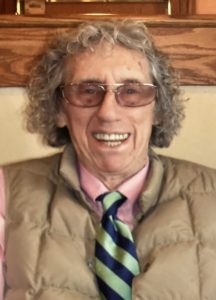 Alfred Douglas “Scoobie” Ahrens of Paris, KY, passed peacefully Saturday morning, January 15th, 2022, a few months shy of reaching his goal of 100.  He was born in Belleville, NJ on September 8, 1922.  Doug was preceded in death by his father, Frederick Charles Ahrens and his mother, Lillian Baughman.  Doug is survived by his family and friends who loved him whole-heartedly:  Richie and Carrie Fletcher, Heather Courtney and Dave Stettler, Jamison Hudnall, Jamie and Madonna Courtney, Conner and Brenda Fletcher, Heather and Andrew Kelley and Gary and Susan Linville.
Doug was an active man whose mind was always thinking of something new to create.  He started working for the Curtis-Wright Corporation as a copper welder in 1941.  After Pearl Harbor, Doug felt a calling to serve his country.  He enlisted in the Navy and began his service on August 27, 1942.  Doug was on the USS Broome (DD-210) which was a destroyer from WWI but used during WWII.  His highest ranking was Radioman 2C.  Doug was able to interpret and use Morse Code to process communications while out to sea.  The destroyer was stationed in the North Atlantic area during the war.  Doug was also on a submarine for a brief period of time which was difficult for a man over 6 feet tall but he loved every minute.  While in the Navy he went to Radar Material School in Norfolk and completed pre-flight school in Iowa.  He had a long weekend while docked in Norfolk so he and some of his buddies traveled to Lexington.  While in the town he fell in love with the area.  Doug received honorable discharge from the Navy in 1946 and remained in the reserves.  He received several awards while serving in the Navy.  They included:  The America Area Ribbon, The European African Middle East Area Ribbon, The World War II Victory Ribbon and The Good Conduct Ribbon which was awarded to recognize the “all-around” good Navy person enlisted.  After leaving the Navy he decided to head to Lexington and began his college career at Transylvania University in 1947. 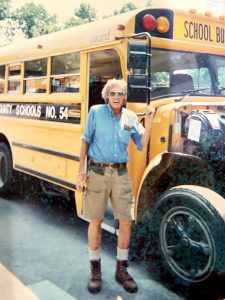 During his years at Transy he performed as a “playmate” in the theatre, sang in the A Capella Choir and was part of the Transy Quartet.  He was a cheerleader, played on their baseball team and was a member of the Phi Kappa Tau Fraternity.  Additionally, he was part of the Crimson staff who wrote publications for the Crimson Rambler.  He was known as “Slim” at Transy because of his tall and slender stature.  After his junior year at Transy, Doug was called back to service with the Navy during the Korean War.  From 1950-1952 he was stationed on the USS Brownson (DD-868) which was a big upgrade from his previous ship.  While on the Brownson, Doug utilized his training and moved to Radarman RD2.  As Radarman he was responsible to detect ships and ensure the radar was working.  At times when they were sailing in freezing cold temperatures he would have to tie a rope around his waist and climb up the ladder to the radar and scrape the ice off so it would work.  During this tour The Brownson was again in the North Atlantic waters and at times was in charge of guarding the Suez Canal during the war.  After receiving honorable discharge from the Navy for the second time, Doug returned to Transy to finish his education.  He graduated in 1953 with a Bachelor’s Degree of Arts.
After graduation, Mr. Ahrens taught and coached football and basketball from 1953-1954 at Russell County High School.  His passion to be a forest ranger would require him to wait a year to enroll, so he decided to further his education at the University of Kentucky to obtain a Master’s of Arts in Education (1955) and a Master’s of Arts in Physical Education (1957).  While at UK, he became a first aid and water safety instructor for the Red Cross, in addition too, a member of the University of Kentucky Fencing Team.
In 1956, Doug saw a flyer for a water front director position at the YMCA Camp Jewell in Colebrook, CT.  For 47 years, on the last day of school, he packed his truck and drove to Camp Jewell, returning prior to the first day of school. While at camp he held numerous jobs including Water Front Director, Assistant Camp Director, Maintenance Director, and Ranch Camp Director where he created a horseback riding program to name a few. Every morning Doug would give a weather report and would sign off by saying “this is Scoobie Doo” hence the nickname. In the early 70’s, the camp transitioned from an all-boys camp to co-ed. Scoobie did not like the change at first so he gave all the girls boy names that year. He eventually accepted the change and loved the progress Camp Jewell has made over the years. He is listed in the history of Camp Jewell as “the staff member to have the longest and most prolific run at camp.” At the end of the day, Ahrens would take leftover food from the day and create Scoobie snacks for the staff that were served at 10pm every night, which is a tradition that continues to this day.
In 1958, Doug started his 60-year career journey with the Bourbon County School System.  He taught at Clintonville Elementary School from 1958-1968.  While there, he coached basketball for 2 years in North Middletown.  In 1968, Mr. Ahrens moved to the Bourbon County Junior High School where he taught from 1968-1993.  In 1988, he began dual roles of being an educator and d 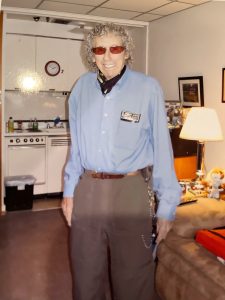 riving a bus. After retiring from the classroom, he continued driving a bus until 1996, then transitioned to radio dispatcher at the bus garage. In this roll, Doug kept Bourbon County updated on road conditions and began announcing a scrub color for all those in healthcare since Carrie and Heather both work in the medical field.  In 2018, after a near fatal fall going to work he retired officially at the age of 96.  Lana Fryman, Amy Baker and Jim Cleaver were instrumental in allowing Mr. Ahrens to continue to work.  A huge thank you them, as well as, those who work at the bus garage from the mechanics to the drivers.  They watched over Doug, made sure he had his coffee, ensured he made it on and off the bus each day, and informed his girls when he wasn’t feeling well, since he never complained.  They were the eyes and ears of the family when he was working and always had his best interest at heart.
Over his 35 years at Bourbon County, Doug never missed a day of school. He was passionate about teaching and wanted to be a role model for his students. He taught them how to make batteries, dressed up like historical figures and even created a sign for Queen Elizabeth when she passed by the school years ago. His enthusiasm and unique way of teaching left a lasting impression with many of his former students. No matter where Mr. Ahrens went, you would always here “Hi Mr. A” and he would happily reply “Hey student”.
In the 60’s and early 70’s Mr. Ahrens performed in different shows including the Paris Lion’s Club Dixieland Shows alongside Rev. John Akers and Kenney Roseberry. He loved to make people laugh with his comedic flare. In 1999, Doug worked diligently to install the garden area around the flagpole in front of the middle school to honor veterans. He made sure the flagpole was set on the 38th parallel, which was also the border between North and South Korea prior to the Korean War. He was always teaching in everything he did. Mr. Ahrens had the privilege to travel to Washington, DC with the Honor Flight of Kentucky in September 2017. Many within the community wrote him notes and cards for “mail call” which he thoroughly enjoyed. In December of the same year, he was Grand Marshall during the Paris Christmas Parade with Kenney Roseberry. In 2018, The National Society of The Daughters of the American Revolution presented him with a Quilt of Valor. 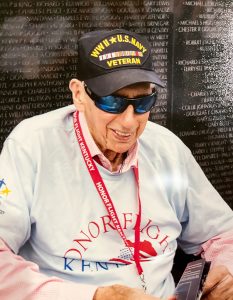 Mr. Ahrens was a mystery to so many but he loved to keep people guessing. One his favorite sayings was “Dare to be different”. He had a unique style and did not want to be like everyone else. He loved wearing Chuck Taylor shoes, which he had in almost every color, and a necktie with a clothespin for a tie clip. Many in town remember his red Chevy pickup truck, which was called the “Millennium Truck.” He said he designed it so that it would stand out in a parking lot and he would not have any trouble finding it. That was Mr. Ahrens. He was one of a kind, who stood out among those in Bourbon County and loved by all!
The family would like to extend a sincere appreciation to many, including, the community of Bourbon County, for the love and respect shown to him and acknowledging his great accomplishments and service to the town. Jerry’s Restaurant is where Doug would spend the majority of his evenings at the counter, listening to the UK ball games on his Walkman and drawing up plans for new projects. His mind was always thinking of something he could tweak or create. The staff at Jerry’s considered him part of their family instead of just a customer. They watched over him like so many in Bourbon County. Over the years, he traded the counter for a table with his family every Saturday morning. Camp Jewell for giving Scoobie the ability to do “All Jobs Camp Jewell” as he stated. He looked forward to spending his summers at camp teaching and working alongside wonderful men and women who shared the same passion, he did. It was his home away from home. Thank you to Gary and Susan Linville for taking Doug to Sunday school and church at Bedford Acres Christian Church where he was a member. He loved the way Gary taught and enjoyed listening to the music. Lastly, the staff at Bourbon Heights for caring for “Dougie” as they lovingly referred to him over the last several years. They enjoyed his positive attitude, dashing style, magnetic charm and the sound of music emitting from his room each day.
Since Doug missed his 100th birthday by a few months, a Celebration of Life will be held on his 100th birthday, September 8, 2022. More details will be shared at a later date. If you are interested in donating in his memory, please consider the YMCA Camp Jewell.
Checks can be written out to:
Camp Jewell YMCA
PO Box 8
Colebrook, CT 06021