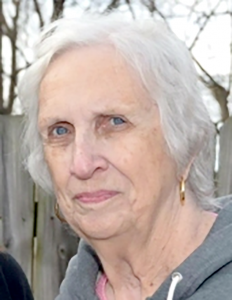 Carolyn Florence Marshall Schietz, 88, died Friday, February 26, 2022, at Baptist Health, Lexington, KY.
Carolyn passed away peacefully after a valiant fight that was the typical Carolyn way. She is survived by her two children that adored her, Bryan Nicholas Taylor and Renee (Pete) Shepard both of Lexington. She also leaves behind two granddaughters, Coco and Stella Jackson, who were the absolute joys of her life. She loved them more than anything in this world and they loved their Memaw very much. As well as the grand-pets; Rusty, Kirk, Jasper and Glitter and great-grand-pet, Archer. She also leaves behind a loving brother, John (Mary Kaye) Marshall and sister-in-law, Beverly Marshall. There are many nieces, nephews, grand-nieces, and grand-nephews that will also miss her a lot.
Carolyn was born and raised in Paris, KY, and lived the past 20 years in Lexington to be closer to family. She was preceded in death by her beloved father and mother, Robert and Ethel Marshall, two brothers (Shirley and Philip), three sisters (Margaret, Bobbie and Betty) and her less than beloved ex-husband, Jim.
Carolyn was a die-hard University of Kentucky Wildcat football and basketball fan. Carolyn and Jim could be found tailgating with friends and family at every home game in the Blue Lot at Commonwealth Stadium in the custom Wildcat van in the 70’s. And there were many road trips taking the kids to football games at Vandy, Alabama, Miss St, Virginia Tech and others. She also loved the Cincinnati Bengals. Carolyn and Jim were season ticket holders for the first 12 seasons of the franchise, her spirits were greatly lifted with this year’s run to the Super Bowl by Joe Burrow and the Bengals.
She also loved to watch Jeopardy and Wheel of Fortune. She was an avid crossword and word search puzzle worker. She loved the ocean, as long as the water never touched her. Her favorite singer was Alan Jackson, she and Renee attended his concert as recently as 2008. She loved to gamble and there were several trips to Vegas so she could sit and play the nickel slot machines. Her favorite part was pulling the handle on the one-armed bandit. She did not cook often, but her lasagna will be greatly missed. Luckily, her beer cheese recipe has been handed down to Nick.
Carolyn’s work ethic was admirable. She had a successful career in a very male-dominated industry, construction. She never took crap off of anyone and quickly earned respect in the field. She began her career in the late 50s at Clark, Stewart and Wood in Lexington. She worked at Hinkle Contracting in Paris starting in the 60’s and she finished her career with 25 years of service at W. Rogers Co. in Lexington. Her work ethic made a lasting impression on both of her children.
Her wicked sense of humor and colorful vocabulary will long be remembered by the family. She had no problem letting her feelings be known. Everyone has their favorite Carolyn story. There was the time she told the KFC worker: “this would be a damn fine place to open a chicken shop”. Or the time she yelled some advice out the window of Renee’s car in the direction of Coach Cal’s house during a two-game losing streak. Or when she was driving in Florida, with David and Renee, and she flipped someone the bird who was tailgating her at night and blue lights came on as it turned out to be a state trooper.
She loved to go on long weekend driving trips with the family. Her favorite destination was the Great Smoky Mountains. Twice a year we would go to Gatlinburg and usually stay at the Twin Islands Motel. She loved eating at the Pancake Pantry. And we would load up on fudge and other candy to bring back. Carolyn is being sent on her final journey with a “g–damn marble” to see if she and Jim can finally settle the recurring argument, they would have on every trip down I-75: “is the road going uphill (mom) or downhill (dad) at that one spot on Jellico Mountain?”
In lieu of flowers the family is asking that donations be made to Lexington Humane Society, where three of her grand-dogs were adopted. Checks can be sent to LHS, 1600 Old Frankfort Pike, Lexington, KY 40504 or online at Donate Today! | Lexington Humane Society. In keeping with her wishes she will be cremated and her ashes will be buried alongside her family in Paris Cemetery.
A memorial service will be conducted at 1:00 p.m., Saturday, February 26, 2022, at the Lusk-McFarland Funeral Home, 1120 Main St., Paris, KY, by Michael Hughes. Burial of remains will follow in the Paris Cemetery.
Visitation will be from 11 a.m., until the time of service on Saturday, February the 26, at the funeral home.
The arrangements were entrusted to the Lusk-McFarland Funeral Home, 1120 Main St., Paris, KY.
The online guestbook is at www. Lusk-McFarland.com and a 24 hour funeral information line can be reached by calling 859-987-4387.