“Customer service is the key to managing a smooth transition and continually showing our dedication to new and existing customers,” said Stock Yards Bank chairman and CEO James A. (Ja) Hillebrand. “The shared values of our two companies set us up for a successful future as one united bank. I am confident that Commonwealth Bank customers will find the same high level of service, often from the same bankers they know and trust, at these new Stock Yards Bank locations.” 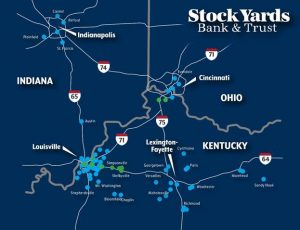