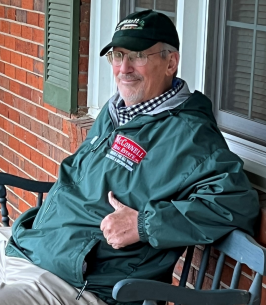 William Thompson McConnell, Jr., affectionately known as Bill T., age 68, of Paris, Kentucky died May 26, 2022, at home. The significance and impact of Bill T. cannot be fully captured in words, but these are a few of the highlights.

He was born to the late William T. McConnell, Sr., and Colleene Monson McConnell. Although born in Paris, KY he moved to Frankfort, KY around the age of two where he attended Frankfort Good Shepherd before returning home to Paris in middle school. He was a proud alumnus of Paris High School (Recipient of Kirkpatrick Cup) where he excelled for the Greyhounds in Baseball, Basketball, Football and Track & Field earning All-State honors and eventual induction to Paris Greyhound Hall of Fame. He was also voted as “Most Likely to Succeed” by the graduating Class of 1972. It was at Paris High he met his future wife, best friend, favorite travel companion, and partner in life, Sheila Brannock McConnell.

After high school Bill T. attended University of Kentucky. Once his stint as a collegiate student-athlete (football) concluded, he started his career at “The Company”, McConnell & Associates under the guidance of Raymond E. McConnell (Grandpa). Earning his Real Estate license in 1973, Principal Auctioneer license in 1975; Real Estate Broker license in 1977; Bill T. quickly established himself as a prominent source “for ALL Your Real Estate and Auction Needs”. By 1984, he had purchased 100% ownership of McConnell Real Estate, Inc. from Raymond, Bill McConnell, Sr., and Barbara McConnell.

As a proud Rotarian since 1974, Bill T.’s belief of “Service Above Self” was evident through the many roles he took on in his community. He almost immediately transitioned from teammate to coach after his playing days; spending countless hours helping kids hone their talents in the GRA-Y, Paris Little League, and Paris School programs. He served on numerous committees, boards, and volunteer groups within the community, always with a goal of enhancing the experience and service one could receive in Paris-Bourbon County. Bill T. was always willing to lend his auctioneer talents at fundraising events. Among his favorite events was the Rotary Club of Paris Annual Run for the Roses Auction. He had a special knack for incorporating his humor during an auction chant that led to many favorable fundraising efforts. Like he would announce to bidders, “It’s only Money” especially when spending for a great cause.

As much as he cherished his community, his family meant everything to him. He woke up early each morning and went to work 364 days a year (staying home on Christmas Day) to provide for them; yet somehow still managed to rarely miss an event in his family’s busy schedule. The role he starred in the best came more recently as Pappy T. Usually preceded by a “rooster crow” when Pappy T. entered a room, smiles and laughter soon followed. He was a loving Husband, Dad, and Pappy that wanted the best for his wife, children and grandkids. After long workdays, he enjoyed sitting on the swing and “dinner dances” to My Girl with Sheila; or schooling the grandkids on the basketball court during their visits to Sunset.

Whether you knew him as the teammate in the dog days of Summer; the passionate coach from your youth; the one who helped buy or sell your home; the fast talker who helped raise money for your favorite charity; the fan in orange and black cheering from the end zone; the “early morning guy” who enjoyed coffee; the love you kissed goodnight; the support system encouraging you to chase your dreams; or the one you call Pappy T… it is simply put that he was someone to be proud of; he was an example of what “Good People” truly means.

Visitation will be Wednesday, June 1, 2022 from 5 – 8:00pm at First Christian Church, 911 High Street, Paris, KY. Funeral Service will be Thursday, June 2, 2022 at 11:00am with Officiant Rev. Jeff Bell of Paris, KY. Hinton-Turner Funeral Home is assisting the family. Burial will follow the service at Paris Cemetery, Paris, KY.

If you wish in lieu of flowers, please consider Memorial Donations to Bluegrass Care Navigators (formerly Hospice of the Bluegrass), 1317 US Hwy 62 East, Cynthiana, KY 41031; or email for details about Bill T. McConnell Scholarship Fund at billtmcconnell.scholarship@gmail.com

Enjoy your Coffee and your day.