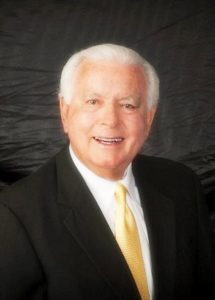 Ernie Trosper, age 88, died at the Willows in Harrodsburg, Kentucky on September 17, 2022.

He was born July 13, 1934, in Harlan County Kentucky, the son of the late Mary Davis Trosper and Rev. Kelly Dee Trosper.  He was preceded in death by his beloved wife, Jan Combs Trosper, and his sister, Maye Trosper.  He is survived by one daughter, Stephanie Trosper Buchanan of Harrodsburg, son-in-law John David Buchanan, grandchildren John Combs (Caroline) Buchanan, Emma Grace Buchanan, and Trosper David Buchanan.  He is also survived by two sisters-in-law, Carol Combs Daugherty and Connie Combs Kincer of Lexington, Ky.

Ernie graduated from Harlan High School in 1951, and Union College in 1955, and he received a Master’s degree in Education Administration from East Tennessee State University in Johnson City, Tennessee.  Ernie later received his Rank I degree from Morehead State University.  Ernie became Union College’s first All-American basketball player in 1955, scoring 2,040 points during his career.  He was selected by Ed Diddle, from Western Kentucky University, to play in the Kentucky/Indiana College All-Star games in 1955.  Ernie began his coaching and teaching career in the Letcher County School System at Whitesburg High School.  He later coached for fourteen years at Tennessee High School in Bristol, Tennessee.  He also served in the College of Education at the University of Kentucky, supervising student teachers and working with the Kentucky Internship program.

Ernie was a member of Calvary Baptist Church in Loyall, Kentucky, where his father served as pastor.  He served as minister of music at Calvary Baptist Church in Bristol Tennessee for fourteen years.  Ernie returned to Paris, Kentucky as principal of Paris High School from 1972 – 76.  He served as minister of music at Central Baptist Church in Paris for the next thirty-four years.  He was on the Board of Deacons during his time there.  Ernie also served as assistant principal at Woodford County High School, principal of Midway Elementary, and principal of Huntertown Elementary for ten years prior to his retirement in 1991.  During retirement, he served as President of the Kentucky Retired Teachers Association.  He also was president of Bluegrass Retired Teachers and Central Kentucky West Retired Teachers.  He was on the Board of Trustees of Union College for many years.  Ernie also served on numerous committees including the Southern Association of Colleges and Schools.  He was president of the Paris Rotary Club, as well as co-president, along with his wife, Jan, of Historic Paris-Bourbon County.  He was president of the Kentucky Mountain Laurel Festival for two terms and a University of Kentucky Fellow.  Ernie served on the Patient-Family Advisory Board of the Bourbon Community Hospital in Paris.

Visitation will be held at Central Baptist Church in Paris, Kentucky on Wednesday, September 21 from 11:00 a.m. to 2 p.m., with services at 2 p.m., officiated by Rev. Dr. Jim Abernathy.  Burial will be in the Paris Cemetery.  Memorial donations can be made to the Union College Ernie Trosper Endowed Scholarship Fund, or Central Baptist Church, 829 High Street, Paris, Kentucky  40361.  Hinton-Turner Funeral Home is in charge of arrangements.  www.hintonturner.com