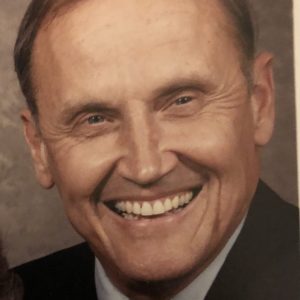 Dick was born in Zanesville, Ohio on December 4, 1928. He attended Zanesville High School where he met his future bride, Sue. After graduation, he enrolled at Ohio University, joined the Beta Theta Pi fraternity, and worked full time at an architecture firm.

Dick served in the Army’s 84th Tank Batallion-3rd Armored Division during the Korean War. Upon his return, Dick’s uncle JR Reinhold recruited him to work at the Miller Casket Company in Lexington, Kentucky. Sue also moved to Lexington and she and Dick married on September 17, 1954. They were blessed with 68 beautiful years together.

While living in Lexington, Dick taught college-aged Sunday School classes at Epworth United Methodist Church. In 1970, he and his family moved to Paris, Kentucky where they attended Bedford Acres Christian Church and then First Baptist Church. Dick loved God and cherished his time spent in the house of the Lord.

Dick was an athlete all his life. He was an avid tennis player and also enjoyed volleyball and ping pong. He was especially skilled at the game of jungle ping pong.

Dick organized weekly volleyball games in his backyard and opened his home to everyone who shared his love for the game. He also organized a volleyball league at the YMCA and weekly tennis nights at Garrard Park.

Dick enjoyed working in his five-acre yard and took pride in every tree planted there. His father and grandfather were railroad workers, precipitating his love for trains.

Dick was a member of the Civil War Roundtable and collected antique clocks and furniture. He completed the Dale Carnegie public speaking course and insisted his children did too. Showing appreciation, compassion, and sympathy to make others feel important and put a smile on their faces were principles from the course that Dick exemplified daily.

After retiring from the Miller Casket Company and closing the doors at age 80, Dick became a docent the Bluegrass Aviation Museum where he enjoyed giving tours to kids of all ages.

Dick was a small-town boy who loved God, his wife, family, and friends. He will be dearly missed by all who knew him.

Dick is survived by his wife, Sue Teckemeyer Reinhold; a son, Reese Robert Reinhold (Becky); a daughter, Ann Reinhold; a granddaughter, Lacy Madden (Zach); a grandson, Quinn Schwartz; and a great grandson, Reese Thomas Madden. He also leaves behind many nieces, nephews, and dear friends in Paris and Lexington.

Funeral services were held at 11:00 a.m. on December 9 at First Baptist Church in Paris. The family is also planning a Celebration of Life picnic next summer at the family home for all who would like to join in remembering Dick. In lieu of flowers, please consider a contribution to First Baptist Church, the Paris YMCA, Bluegrass Hospice Care, or the Bluegrass Aviation Museum. Hinton-Turner Funeral Home is in charge of arrangements. www.hintonturner.com