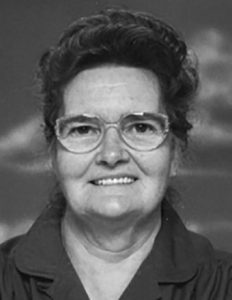 Geneva V. Carpenter Durham, 85, died Saturday, October 5, 2019 at her home in McMinnville, Tennessee.
A native of Owingsville, KY, she was the daughter of the late John Carpenter and Martha Sue Eldridge Carpenter.  She was a private duty sitter and formerly attended the Bible Holiness Church of Paris, KY before moving to Tennessee.
She is survived by one daughter, Sue Morris; two grandchildren, Jerry Purcell and Crystal Purcell; six great grandchildren and five great great grandchildren; one brother, Arthur Carpenter and a number of nieces, nephews and cousins.
In addition to her parents, she was preceded in death by two sisters, Thelma Setters and Mary Hutchison.
Funeral services will be conducted at 1:00 p.m. Thursday, October 10, 2019 at Lusk-McFarland Funeral Home, 1120 Main St., Paris, KY by Rev. Steve Baker.  Burial will be in the Paris Cemetery.
Visitation will be from 11:00 a.m. until the hour of service on Thursday, October 10th at the funeral home.
Pallbearers will be Jerry Purcell, Greg Vaught, Steve Setters, Robert Setters, Shawn Smith and Mike Vaught.
Honorary pallbearers will be James Purcell, Steven Stinnett, Jerry Florence, John Black and Randy Vaught.
Memorials may take the form of contributions to Lusk-McFarland Funeral Home to assist the family in paying for the funeral.
The funeral arrangements were entrusted to the Lusk-McFarland Funeral Home, 1120 Main St., Paris, KY 40361.
The online guestbook is at www.Lusk-McFarland.com and a 24 hour funeral information line can be reached by calling 859-987-4387.