PARIS, KY – A year ago, the Bourbon County Colonels entered post season play as one of the best teams in the 10th Region that had a legitimate shot at winning the region title. That, however, didn’t happened because Montgomery County had other ideas when they stunned the Colonels in the semifinal of the 40th District Tournament, sending Coach Lamont Campbell’s team home way too early.

One year later, the Colonels nearly, or should’ve, turned the table.

The Indians, ranked among the elite in the region, saw their season in serious jeopardy when an incredibly determined Bourbon County basketball team gave them all they wanted and some but at the end, poor free throw shooting kept Campbell’s team from pulling the upset.

The Colonels finished the game making just 10 of their 22 attempts, including a 4 of 11 performance in the final quarter, with most coming when Bourbon was trying to pull ahead of the Indians, who beat the Colonels by 41 points earlier into this unusual season. 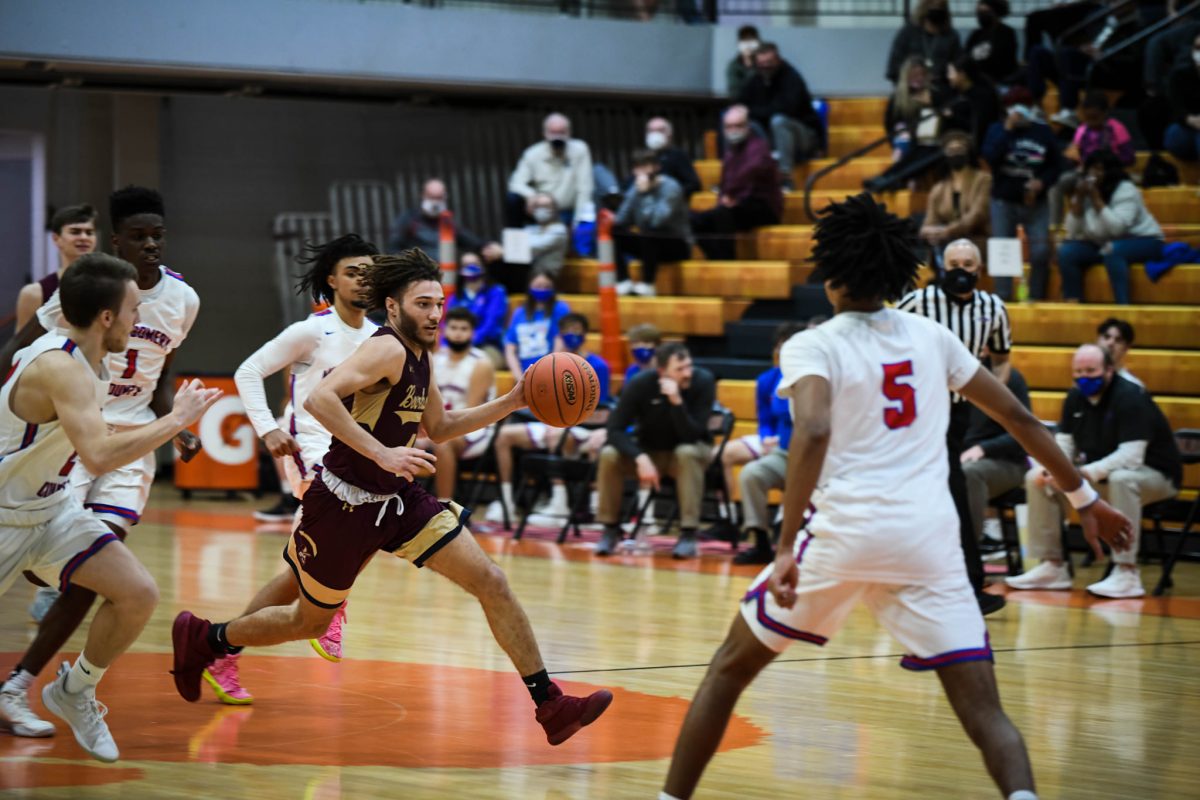 I’M COMING THROUGH – It appears that Bourbon County senior Jeremiah Jones, who was simply marvelous for the Colonels, was going to take on the entire Montgomery County team as he pushed towards the basket. Jones led his team with 20 points, 6 rebounds and 4 assists, which was good enough to get him named to the All-Tournament team.
KRISTA BARNETT I For BCHS Sports

Down by 7 (52-45) with 5:50 remaining in this hotly contested contest, the Colonels turned up the heat on defense and made their comeback on the heavily favorite Indians, as the limited crow inside Earl Redwine Gymnasium made it feel like a packed house.

A free throw by sophomore Todd Dumphord, followed by back-to-back lay-ups from seniors Jeremiah Jones and Parker Estes, helped BC close the gap to 52-50 at the 3:33 mark of the frame. An old fashion three-point play by the Indians senior workhorse Rickey Lovette made it 57-52 before Campbell’s team made another push at Coach Steve Wright’s squad.

The Colonels, behind the scoring of Jones, who was simply marvelous down the stretch for his team, closed the lead down to one at 59-58 with under a minute remaining. From there, Bourbon had two chances to overtake Montgomery County but a missed shot and late turnover, surrounded around a clutch free throw from MC’s J.T. Woosley , helped the Indians survive the huge scare 60-58.

Jones paced Bourbon with 20 points, 6 rebounds, 4 assists, 2 steals and 2 blocks. Parker added 12 points and 10 rebounds, while senior Jack Huckabay finished with 11 points and 6 rebounds. Dumphord numbers had him with 10 points, 4 rebounds and 4 assists. Rounding out their scoring saw David Green and Layton Starks with 2 points and Miles Ezell had one.

With the victory, the Indians (11-7) will now face top ranked and defending champ George Rogers Clark (15-4), who won both regular season matchups over their rival, in the district championship game Thursday night inside Earl Redwine Gymnasium with a 7:00 start time. Both teams will move on to next week’s 10th Region Tournament that will be played inside the Fieldhouse on the campus of Mason County High School.

“Last night’s game truly showed our growth as a team. We’ve never felt like a 4-15 team and have prepared each day as if we were 15-4,” shared the Colonel Coach over a text message. “Our guys put everything inside of them into every possession and gave our team a chance to win. When that happens, as a coach, you can live with whatever the outcome is.” 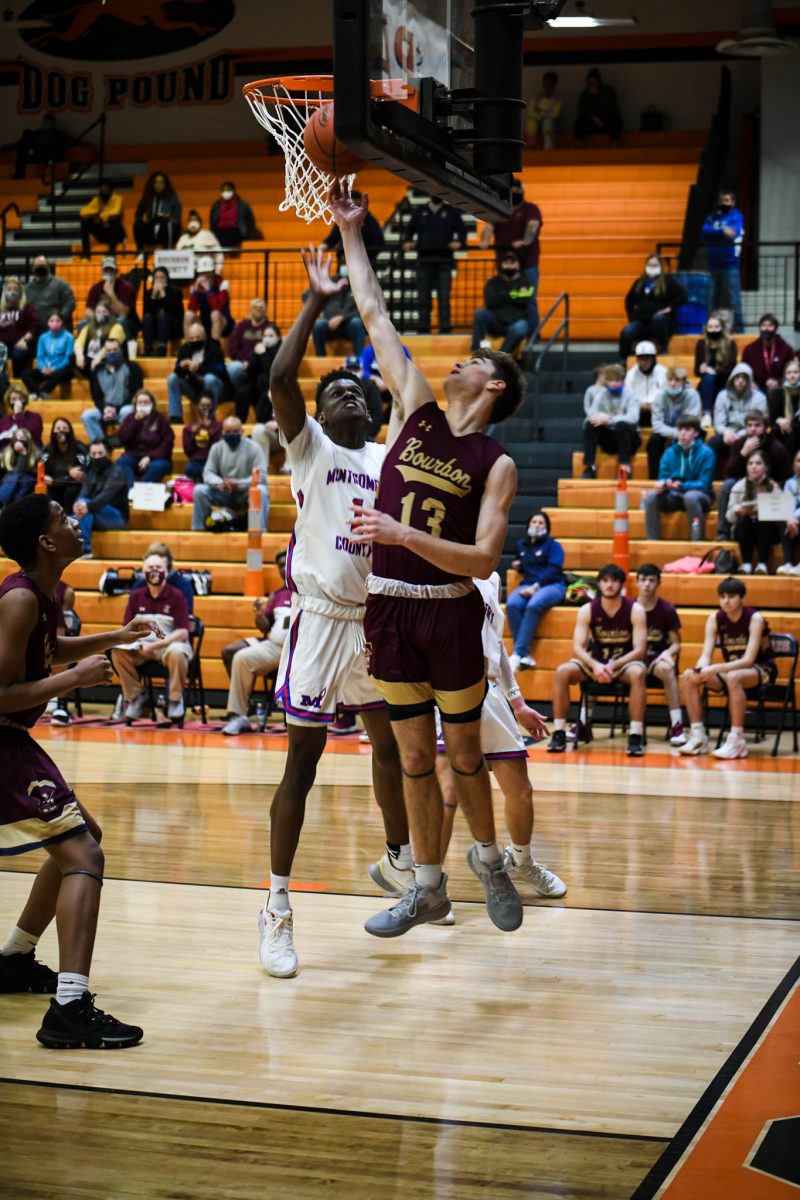 UP AND UNDER – Bourbon County senior Jack Huckabay went up for this reverse lay-up just in front of Montgomery County’s Rickey Lovette during the very intense district tournament game last night at Paris. KRISTA BARNETT I For BCHS Sports

Two quick baskets from Lovette gave the Indians the early 4-0 lead. Bourbon closed the margin to 6-4 before MC responded with a 7-2 run to push their lead out to 13-6 with 2:00 left in the opening frame. Five straight points from Huckabay and a bucket by Estes helped BC get to within four (17-13) at the end of the first eight minutes.

An old fashion three by Jones, followed by a made pullup three from Jones, saw the Colonels grab their first and only lead of the night at 19-18 two minutes into the second quarter.

The Indians, thanks to senior Eric Morgan, answered BC’s mini run with a run of their own to overtake the scrappy Colonel team 29-20.

Montgomery maintained that nine point advantage over the next few minutes of the game until Huckabay nailed a jumper in the closing seconds to help his team close the deficit to 37-30 at the break.

The third quarter for the most part saw the teams trade basket for basket as the stayed in front 48-42 after three quarters of action. Bourbon did get to within three at 41-38 on a basket from freshman Layton Starks, just seconds ahead of a made three by MC’s Morgan that pushed the lead back to six at 44-38.

A layup by junior David Green made it 48-44 just 34 seconds into the fourth. Two made free throws from Lovette following a technical foul on the Colonel Coach, made it 50-44. Dumphord’s free throw closed it back to 50-45. Lovette’s third dunk of the evening rose their lead to 52-45 and from there, the Indians held on for dear life to escape with the win.

“In a game like that little things matter. Free throws were so important for both teams. Us going 2-9 in the fourth quarter and them only making 1 of 2 to put the game away gave each team a chance,” said Campbell. “The ball doesn’t always bounce your way, but you always want to give yourself a chance and we did so many other things to give ourselves a chance to win. Couldn’t be more proud of the effort and representation of the Bourbon County Community. 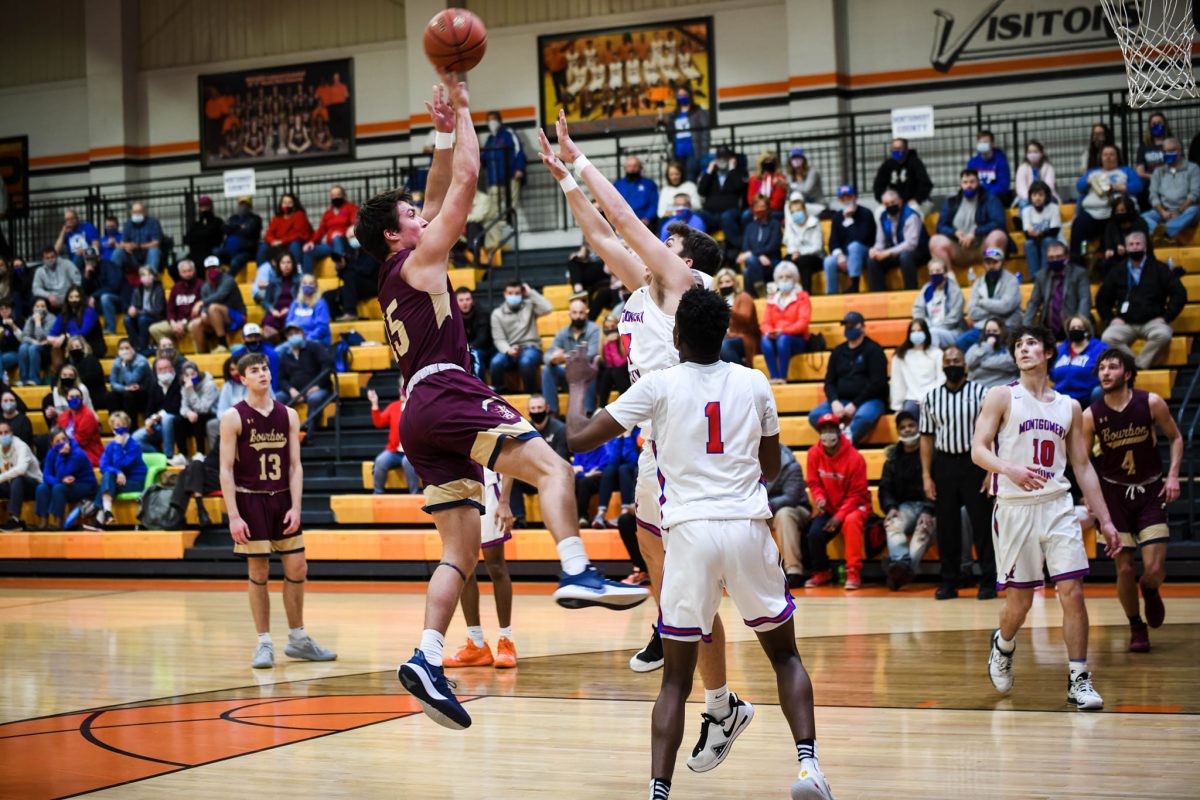 ESTES WITH THE FLOATER – Colonel senior Parker Estes did his best to pull off this off balanced jumper despite the defensive pressure of Montgomery County’s Alex Hatton. Estes finished his night with 12 points and 10 rebounds. KRISTA BARNETT I For BCHS Sports