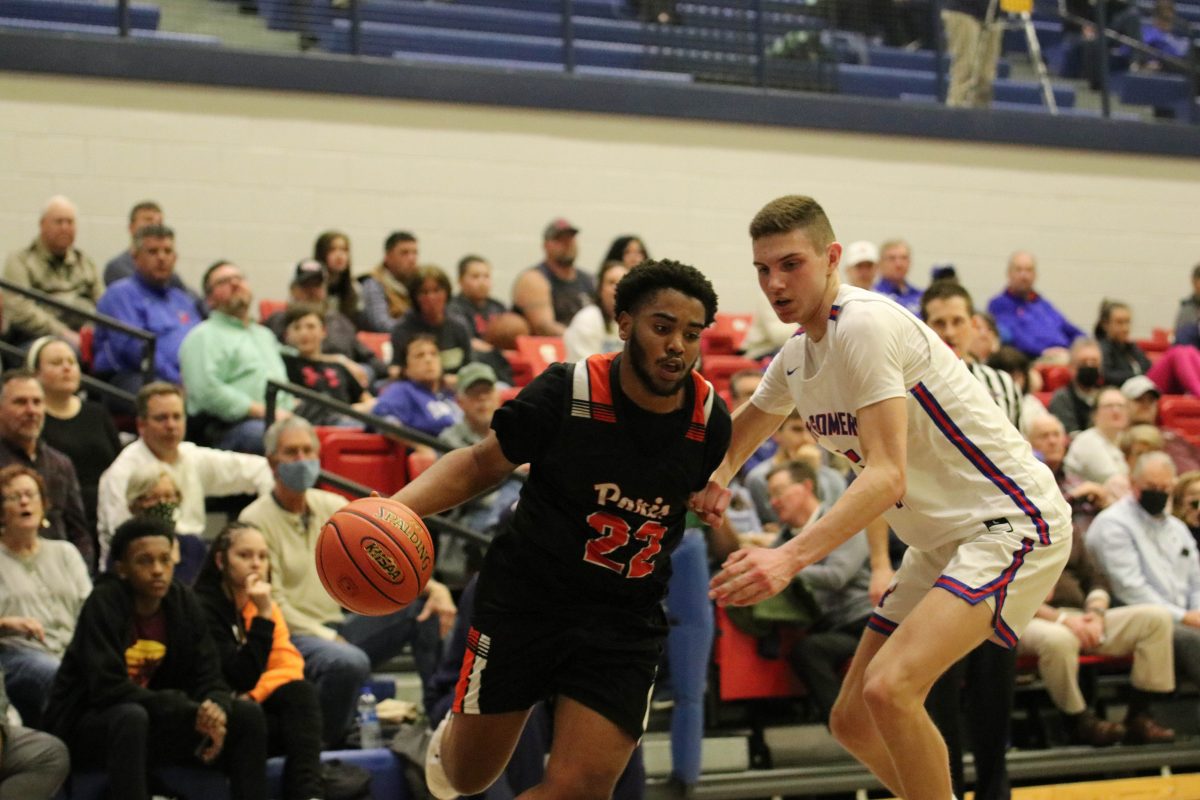 MT. STERLING, KY – What an incredible night to witness the grit and the character of a Paris team that most haven’t seen all year.

Coach George Baker’s team showed a ton of heart against host Montgomery County on Tuesday night, rallying from a 19-point second half deficit to complete a miraculous comeback as they stunned the Indians 63-56 with a near flawless fourth quarter. It was a win that was desperately needed by the Hounds, no matter how it was accomplished.

With the unbelievable victory, the Greyhounds will now face top ranked and four-time defending district champion George Rogers Clark (29-1, 7-0) in tonight’s 40th District Championship game, where the Greyhounds will be making their first appearance since winning the title back in 2017. GRC, who looked very impressive during their win over Bourbon County in the first semifinal (well, actually, they’ve looked impressive all season long), smashed the Greyhounds (7-19, 2-5) during the regular season meetings by scores of 89-21 and 96-47.

Game time is set for 7:00 in Mt. Sterling and regardless of the outcome, both teams will move on to next week’s 10th Region Tournament that will be played at Covington Holmes High School. Coach Josh Cook’s Cardinals, undefeated against Kentucky competition, will be the heavy favorite going in where they should defend their crown from a year ago. 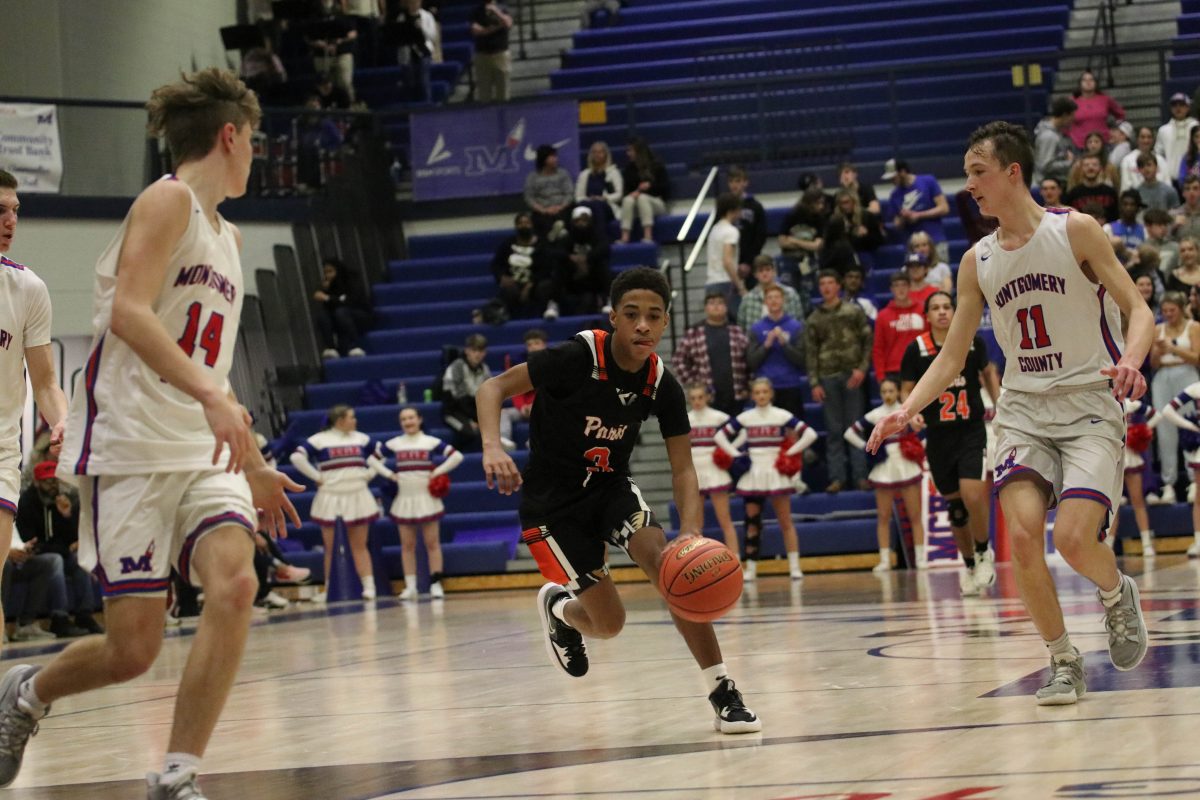 During a timeout, Coach Baker told his players to keep playing hard, don’t quit and turn up the pressure because they can do this. “Have some faith and just keep working hard guys, we got this!”

Baker made those comments to his team when they trailed the host Montgomery County Indians 46-27 with 2:00 reaming in the third quarter. Up to that point, Coach Jon Bentley’s squad was clicking on all cylinders, while the Greyhounds were pretty much going through the motion. They couldn’t make shots, they kept fouling and kept turning the ball over as it appeared the Indians, who dodged a huge bullet the last time the two teams played at Montgomery, was in total control. All they had to do was finish!

Paris, however, wouldn’t let them finish!

Two free throws from senior Cameron Lilly, a “excuse me” three by eighth grader Malachi Ashford, followed by a slicing reverse lay-up off the fingertips of senior Tyzian White, the Hounds closed the gap to 14 (48-34) heading into their sizzling fourth quarter.

A midrange jumper from junior Jayden Marks and a three by sophomore Jakari Ransom to open the fourth, the Greyhounds, down 19 just three minutes ago, had close the margin to 9 at 48-39.

The Indians pushed their lead back to 13 (52-39) with 4:17 showing on the clock, following Breccan Decker’s two made free throws and Trey Carroll’s driving lay-up. 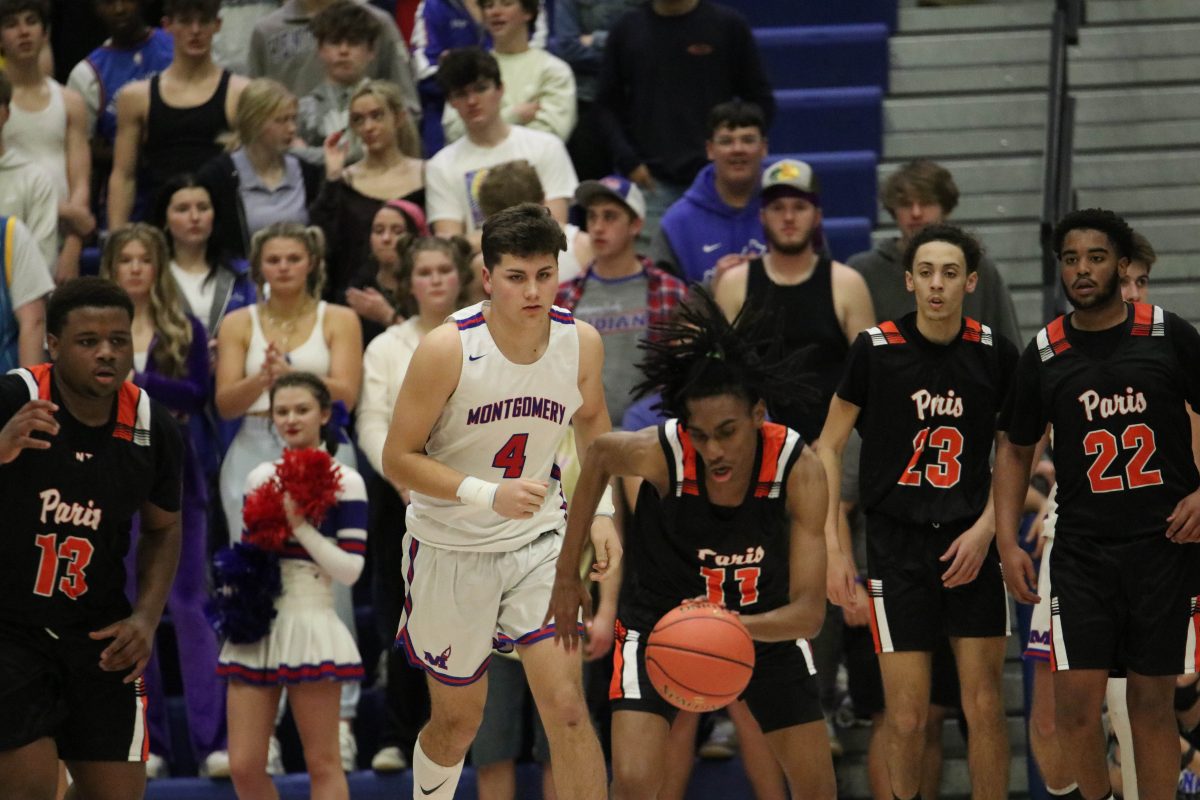 Ashford led a furious charge by the Hounds over the next three minutes to help his team get back into the game, making two 3-pointers and scoring 10 points in a 19-0 massive run that saw the Greyhounds overtake the Indians, moving in front of the home team 58-52.

“We have the best eighth grader in the state,” Baker said about Ashford. “He’s that good!”

Others who played huge during the run were White, Ransom, Aidan Roberts, Kentarrion Downey and Marks.

While the Indians struggled to put the ball in the basket over the final minutes of the game, the Hounds sealed the deal at the free throw line, where they hit seven straight that included two big free throws from Downey that got his team to within one. 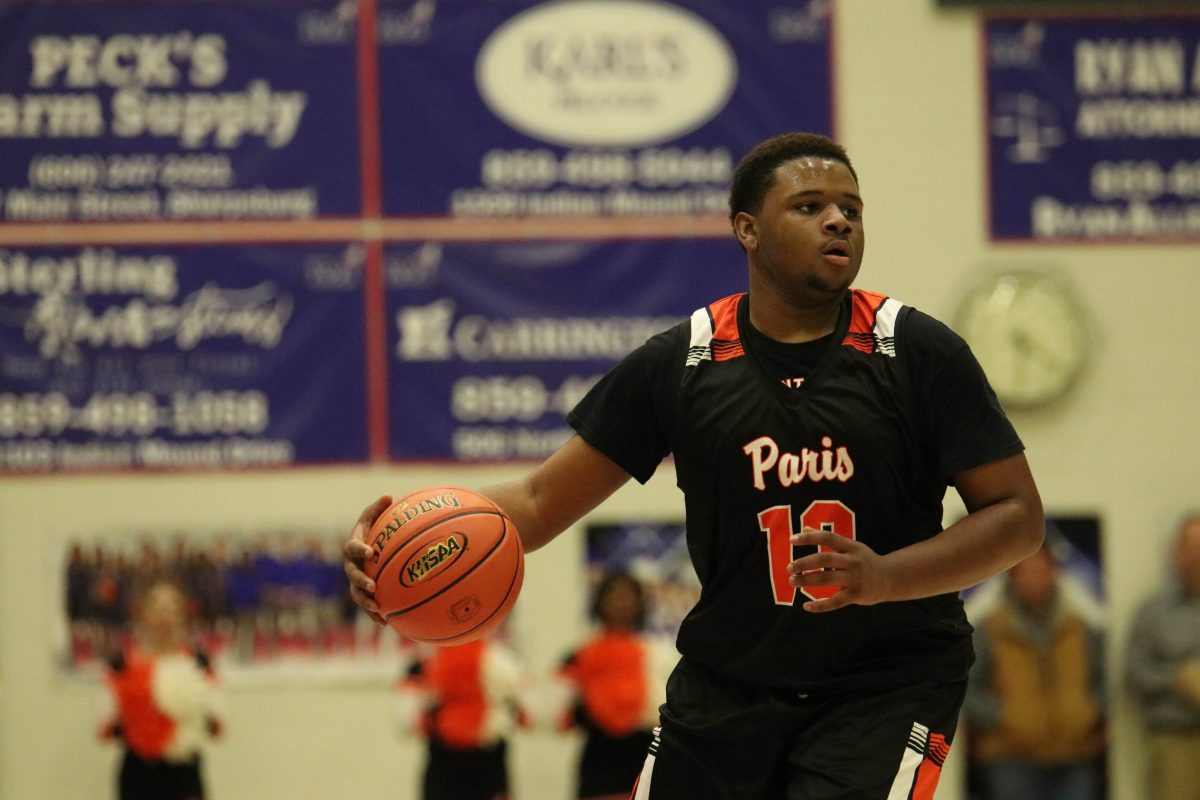 After being down 19, Paris, over a span of about nine minutes, outscored the stunned Indians 36-7 to close out one of the most epic comebacks in the history of Greyhound basketball that had a region berth on the line.

“I’ve seen my kids play hard before but last night was the hardest I’ve ever seen them play,” Baker shared over a phone conversation. “I told them it wasn’t about making buckets because we knew we could score, we had to get some stops. Play tough defense and let’s see what happens.” The coach went on to say that senior Kentarrion Downey, who had a lackluster performance heading into the final stanza, made a huge difference in the final stages of the game. “Once he got back on the floor, he changed the game by playing big in the paint.”

Paris raced out to an early 8-2 lead on back-to-back treys from Ashford and Roberts and two free throws by Ransom. The Indians, behind the scoring of Decker and eighth grader Luke Fawns answered with a 10-0 run to grab a 12-8 lead with 1:08 left in the opening frame.

The Hounds tied the game at 14-all on three balls from Marks and Ransom but the Indians moved back in front at 17-14 on eighth grader Dawson Gentry’s three to end the quarter.

During the first quarter, the two teams combined for 7 three-point goals.

The second quarter was all Montgomery as Bentley’s team outscored Baker’s Greyhounds over the eight minute period 13-4 to take a 30-18 lead into the halftime break. Carroll led MoCo during the quarter with six points and Fawns hit a big three that gave Montgomery a 14 point lead. Downey’s two made free throws at the end of the half, got Paris back to within 12.

Montgomery opened the third on an 8-2 run that was highlighted by a three from Fawns and five made free throws, with four coming from Carroll.

Ransom two free throws and a three by Marks saw the Greyhounds close the margin back to 11 at 36-25 before the Indians, behind Fawns and Carroll, scored the next nine points to move their lead out to 46-27 with two minutes left in the third. 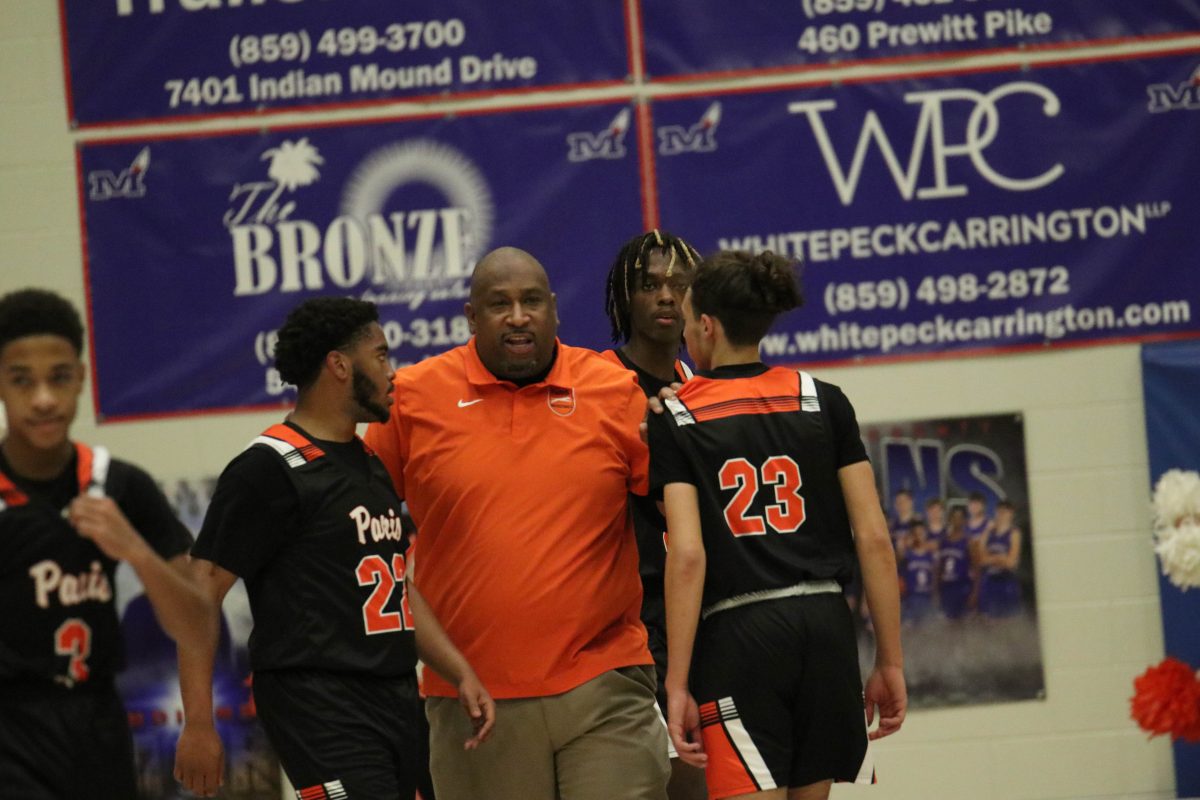 From that point on, the Hounds started their comeback!

Carroll paced all scorers with 19. Fawns totaled 15 points and  a game-high 13 rebounds. Other Montgomery scoring came from Gentry with 8, Decker 7, Alex Hatton 4, Hayden Stull 2 and one point from Landon Caldwell.

“I would like to thank the entire community of Paris for always being behind us and being uplifting an always backing our team,” concluded Baker. “Thanks for your support!”

When asked about playing No.1 ranked GRC, Baker quietly said, “We will show up and play!”

ALL PHOTOS TAKEN BY JENNIFER ARNETT 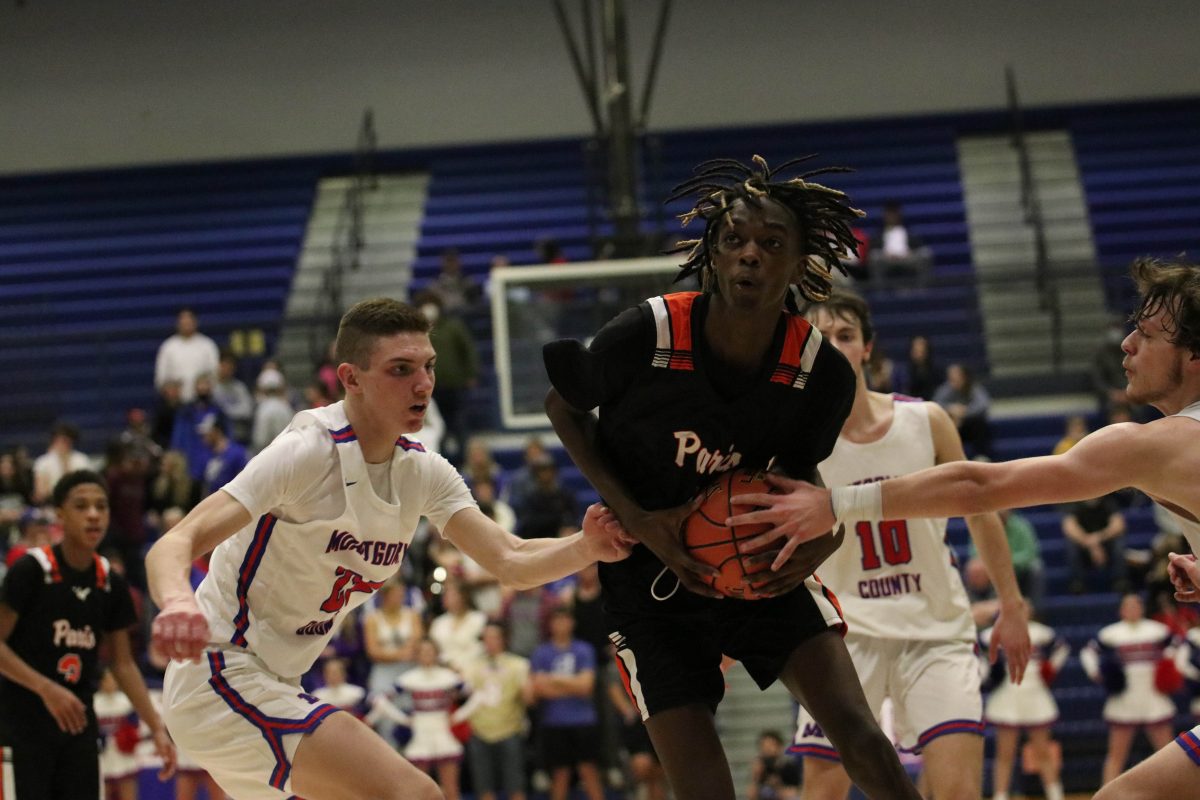