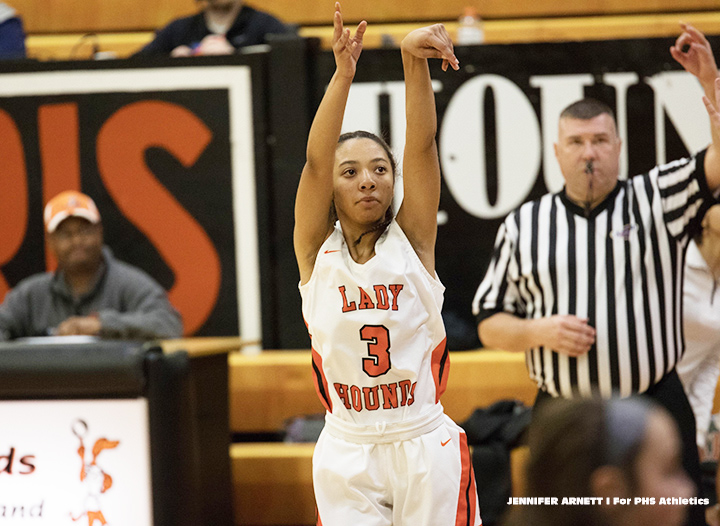 TYE BOMBING AWAY – Ladyhound junior guard Chez Tye hit three treys in the opening quarter en route to a game-high 18 points to lead her team to a 54-43 victory over Mason County, their first over the Lady Royals in 15 years.

PARIS – Paris Ladyhound junior guard Chez Tye started off her season with a bang as she jump started the Ladyhounds to an early lead, which eventually, helped Aaron Speaks’ squad end a 12-game losing streak to the visiting Lady Royals of Mason County with the 54-43 victory inside Earl E. Redwine Gymnasium Tuesday evening.

The Lady Royals grabbed a 2-0 lead but Tye caught fire by hitting three consecutive threes to help Paris go on a 13-2 run, which led to an 18-11 lead at the end of the first frame.

Mason, ranked 5th in the preseason 10th Region poll, didn’t quit as they managed to outscore Paris in the second quarter 17-10 to pull even at the break at 28-28.

The third quarter was the difference in the game.

Paris turned up the defensive pressure to erase a 33-30 Mason lead that saw Speaks’ team end the quarter on a 16-3 run that was capped off by a buzzer beater throw-in by sophomore Asja-li Garrard after one of her five steals on the night. 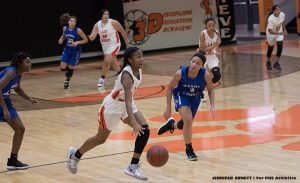 GARRARD WITH THE STEAL AND BUCKET – After picking the pocket of Mason County’s Milyn Henry, Paris sophomore Asja-li Garrard look up at the clock for a brief second just before she nailed a desperation shot at the buzzer that gave the Ladyhound a 10-point lead after the three quarters. Garrard finished with 9 points, 5 rebounds and 5 steals.

“We played well in the first and third quarter and did just enough in the fourth to pull a good win over a very good team,” said Coach Speaks afterward. “We still, however, have a lot of things that we need to work on, especially after turning it over 22 times.”

Sanaa Jackson’s steal and lay-up and Jamie Cowan’s explosive move to the basket for the and one, pushed Paris out to their biggest lead of the night at 52-36 midway through fourth quarter. From there, the Ladyhounds would coast home for the 11 point win.

Tye finished her night with a game-high 18 points, as well as 4 steals. Cowan, despite foul trouble, finished with 10 points and 7 rebounds. Garrard had 9 points and 5 rebounds to go along with her 5 steals. Zoe Strings filled out her stat sheet with 7 points, 7 rebounds, 5 steals, 5 assists and blocked 4 shots. Jackson had 6 points, 3 rebounds and 3 steals. Chloe Kemper and Nia Kenney closed the Paris scoring with 2 points each.

The Ladyhounds will return to Earl Redwine gym on Friday night against West Jessamine (game time is 6:30) and again on Saturday afternoon (game time is 12:45) to face Danville Christian in the Kentucky Bank Classic. 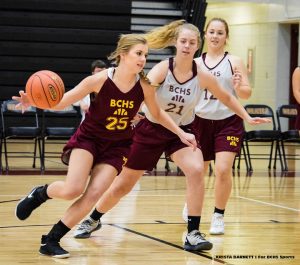 MURPHY AND HAMELBACK LEAD BC – Lady Colonel junior guard Hannah Hamelback drove past fellow junior McLain Murphy during the Bourbon Athletics “meet the team night” that was held last month inside Russ Day Gymnasium. Murphy led the Lady Colonels with 20 points and 6 rebounds during their 57-36 season opening victory over Berea, while Hamelback finished her evening with a career and game-high 14 rebounds to go along with her 6 points.

As a team, the Lady Colonels totaled 47 rebounds and 15 steals but only manage to hit 16 of their 35 free throw attempts and 18 of 52 shot attempts.

Bourbon led 16-9 after the first quarter and extended that lead to 33-23 at the halftime break. They would then put the game away in the second half by outscoring the Lady Pirates 24-13, including 15-7 in the final frame.

Alexis Newman paced Berea with 9 points and 9 rebounds. Isis Rodgers had 7 and Natalea Clark tossed in 5 to lead the Lady Pirates offensive attack.

Watson’s team (1-0) will be at home on Friday night when they play host to Madison Central, who opened their season Monday night with a 49-33 loss against Woodford County. Game time is set for 7:30.