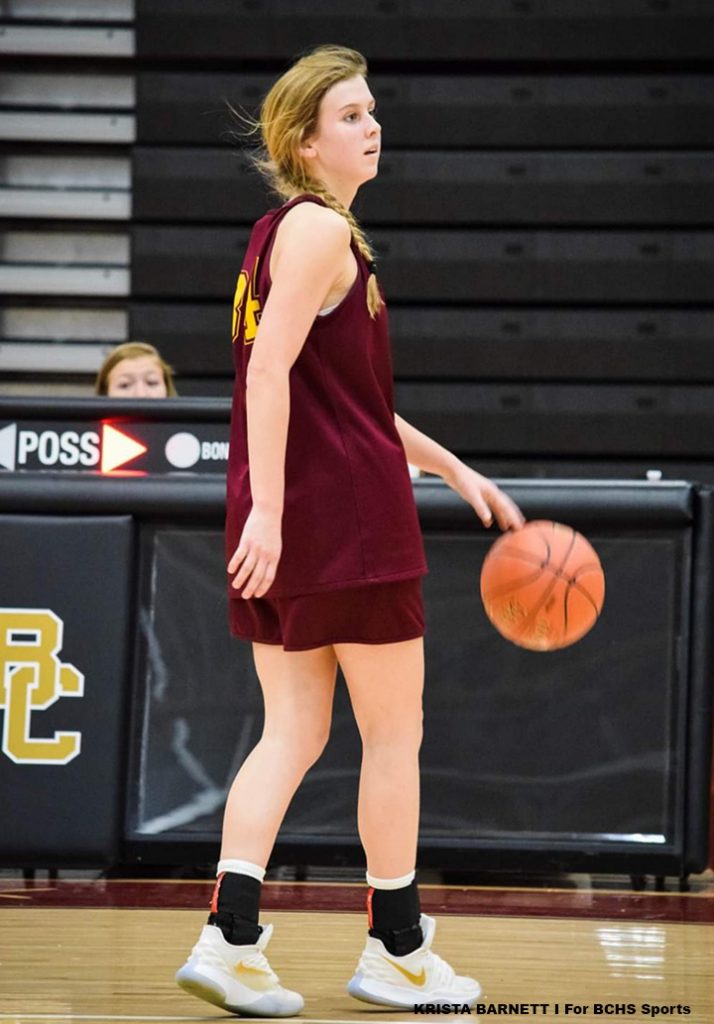 JOHNSON PLAYED BIG AGAINST DOUGLASS – Junior guard Lyndsay Johnson finished with a huge night against Frederick Douglass that saw her score a game-high 17 points, while recording 8 rebounds and 7 steals. Johnson, as well as teammate Hannah Hamelback (averaging 6 points and 11 rebounds per outing) could miss Bourbon’s game against Madison Central tonight because of a prior commitment to attend a very important leadership conference in Frankfort.

LEXINGTON – Two years ago when Coach Bill Watson’s Bourbon County Lady Colonels made the trip to Frederick Douglass, his team would return home with a heartbreaking defeat, after the Broncos nailed a half-court shot at the buzzer to steal the 58-57 victory.

This time around, a half-court shot wouldn’t save Coach Shawn Ransom’s Broncos (1-1), as they continue life without all-everything guard Destyne Jackson, who graduated this past spring.

Bourbon, behind stellar performances from juniors McLain Murphy (15 points, 10 rebounds, 10 steals) and Lyndsay Johnson (17 points, 8 rebounds, 7 steals, 3 assists), used a strong second half to blow past the Broncos in easy fashion 54-32. The margin could’ve been higher had the Lady Colonels hit some free throws. For the second straight game, Watson’s team struggled from the line. During their win over Berea, Bourbon made only 16 of 35 attempts and last night, they hit only 12 of their 34 uncontested mid-range shots.

Even though Bourbon had a hard time putting the ball in the basket (19 of 56 from the field), they made up for it on the defensive end as they caused Douglass to turn the ball 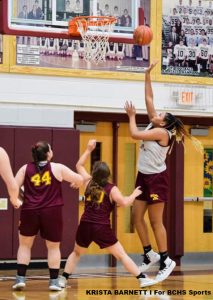 MEADE GOING IN FOR THE SCORE – Lady Colonel freshman center Jhaven Meade has been a force inside the paint so far this season, averaging nearly 11 rebounds and 4 blocks per game during Bourbon’s two wins.

over approximately 40 times. As a team, the Lady Colonels had 32 steals and pulled down 46 rebounds that saw five different girls with 6 or more rebounds.

Bourbon trailed 17-11 after the first frame but roared back to grab the lead by the break at 23-21. The third quarter, thanks to some stifling defense, was all Bourbon as Watson’s team outscored Ransom’s team 20-6 to increase their margin to 43-27 heading into the final eight minutes that was also won by the Colonels 11-5.

“We played well on the defensive side of the ball,” said Coach Watson over a text message. “Right now, we’re just having trouble making shots.”

Besides Murphy and Johnson, the Lady Colonels did receive some help from other players. Leading the way was freshman Jhaven Meade, who totaled 7 points, grabbed 11 rebounds and blocked 4 shots. Hannah Hamelback had 6 points, 7 rebounds and 3 steals. Jaydyn Goodwin totaled 3 points, 6 rebounds and 4 assists. Rounded out the scoring were Jaycee Goodwin with 3, Bella Mitchell 2 and Hailey O’Donnell with one point.

Bourbon (2-0), who could be without two starters, will be back in action tonight inside Russ Day Gym when they play host to the Lady Indians of Madison Central (0-1) in a triple header involving the freshman, junior varsity and varsity team.