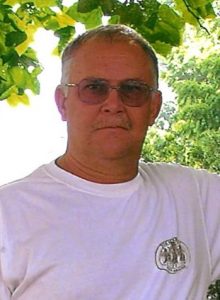 A native of Cynthiana, KY, he was the son of the late Louie Thomas Fryman, Jr. and Mary Grace Owens Fryman.  He graduated from Bourbon County High School in 1975 and began his career as a machinist with Clark Equipment Company in Georgetown where he attended Bluegrass Technical College to gain his machine shop skills and performed his duties there until Clark closed down.  Later that year, he continued his career with Ideal Tool and Manufacturing in Lexington, KY until their move to Nicholasville where over the past 30 years of service, he performed the duties of a skilled Tool and Die Maker.

Ruddles Mill was selected for a new fire station in 1999 during a spring community meeting at the Ruddles Mill Christian Church. During the past 20 years, Gary has served as Fire Chief to the residents of Ruddles Mill and Shawhan.  He was a servant of God and a servant to his community.

During the length of his life, Gary served on Board of Directors for the fire department, Fire Chief, EMT, Board of Directors for the Northern Bluegrass Bowling Association, State Delegate for the Kentucky State Bowling Association, Secretary/Treasurer for the River Road Bass Club for many years, Assistant Bowling Coach for the Bourbon County High School Bowling Team during the 2009-2010 and owner and operator of Fryman Farm Produce.

In addition to his wife, he is survived by one son, Jeffrey Thomas Fryman (Kristin) and grandchildren, Damian Thomas Fryman and Clara Grace Fryman; one daughter, Kimberly Elaine Wells and grandsons, James Morgan McIntyre and Owen Carter Wells; mother-in-law, Beulah McCall True (Bobby) and brother-in-law, Jeff A McCall (Tracy) of Paris and a very special family friend, George McIntyre along with many other friends, coworkers, fishing buddies, bowling team mates and farmers market friends.  He leaves behind his best furry friend Jessie that he loved so dearly.