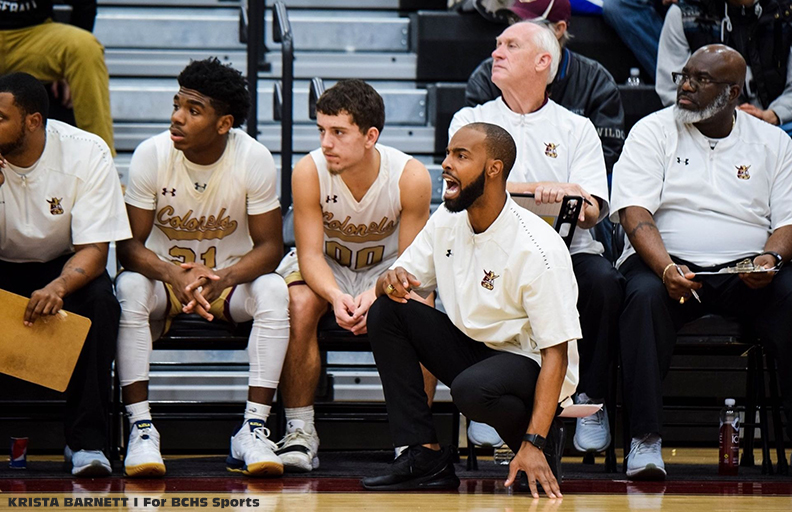 GET IT AND GO GUYS – Colonel Coach Lamont Campbell yelled out instructions to his team during an earlier game this week. After the Mason County win last night, the Coach said that when his team play Colonel ball, there aren’t that many teams that can play with them when they turn up the pace.

Colonels Totaled Only 12 First Half Points

After Missing 23 Of Their 26 Shot Attempts

The way things started out, the Royals, who were playing without the services of two key players, appeared to be well on their way to a surprise blowout victory over the visiting Colonels. 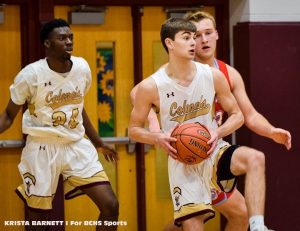 Mason led 14-8 after one quarter and 25-12 at the break, after Campbell’s team shot a miserable 3 of 23 from the field over the first 16 minutes of the contest. At one point during the half, Bourbon went scoreless for nearly 8 minutes and Kirk’s team answered that with a 10-0 run. Nakwan “Bone” Joyce’s basket around the 3:00 mark of the second frame stopped Bourbon’s long scoring draught.

The home team maintained their lead after three quarters at 40-30, although Bou 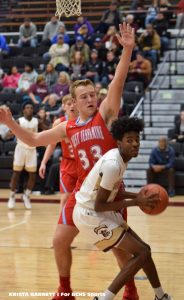 PULLING DOWN THE REBOUND – Senior Colonel Amari Faulkner hauled in this rebound just in front of the West Jessamine player during Bourbon’s home win over the Colts. Last night against Mason County, Faulkner had 3 points and 4 rebounds.

It was the play of the Colonels during the fourth quarter and overtime that determined the outcome of this ballgame.

Trailing for nearly the entire game, Colonel senior Brycen Collins got his team even with the Royals at 46-46 with three minutes left in regulation.

Mason went up 50-47 on a three by Jeremiah Jones but Bourbon, behind the play of seniors Amirion “AJ” Joyce and Nakyir “Scrap” Joyce, answered with an 8-2 run to move in front 55-52. The Royals tied the game on a bucket by Alex Schalch with under 10 seconds remaining. That field goal sent the game into overtime after Scrap Joyce missed a runner near the buzzer.

In overtime, it was all Bourbon as they scored more points over the next four minutes than what they did the entire first half.

Jake Huckabay’s three jumped started the Colonels on a 12-1 run in the extra period and from there, the 19th ranked team in the state, cruised home for the win.

“I think last night showed the type of team we are. We cannot wait around and play other team’s pace,” Campbell said through a text message. “We shot 3/26 in the first half and did not push the pace. The second half we scored 65 points forcing turnovers and pushing the ball. That’s who we are. When we play that way, there aren’t many teams that will be able to play with us.”

Schalch led the Royals (1-2) with 21 points. Xylon Frey followed him with 14 and Jeremiah Jones finished with 10.

Bourbon County (3-0) will host crosstown rival Paris (1-2) Friday night in the first day of the two-day Kentucky Bank Shootout that will be played inside Russ Day Gym. On Saturday evening, Bourbon will entertain Region 11 power Henry Clay (2-1) in a battle of two state ranked teams.

Other boys games on tab for Saturday in the Shootout will have Nicholas County against Elliott County at 2:00; Mercer County vs. Louisville Butler at 4:00; Bryan Station vs. Woodford County at 6:00 and Bourbon and Henry Clay will follow.