En Route To A Career-High 27 Points 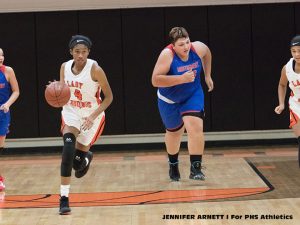 STRINGS ON THE MOVE – After pulling down one of her game-high 13 rebounds, junior guard Zoe Strings started the break for the Ladyhounds during their win over Montgomery County yesterday evening in Paris. Beside her rebounds, Strings also scored 11 points, had 5 assists and blocked 3 shots.

PARIS – Ladyhound fourth-year Head Coach Aaron Speaks said during the preseason that on any given night, anyone of his five starters could lead them in scoring.

Tuesday night, inside a rowdy and loud Earl E. Redwine Gymnasium, it was freshman guard Sanaa Jackson’s turn as she became the third different player this season to lead the team in scoring after going off for a career-high 27 points that included five three-point goals as she helped Paris escape past an extremely young and determined Montgomery County team that gave the fifth ranked Ladyhounds all they wanted and some during this early season 40th district clash.

Led by eighth grade sensation Hayden Barrier, the daughter of former Miss Kentucky Basketball winner Beth (Vice) Barrier, played a whole lot like her mom as she and a slew of other young talented Lady Indians (1-2, 0-1), tried their best to lead their team over the Ladyhounds (4-0, 1-0), who in their own right, is also young with no seniors.

In a game that saw 15 lead changes over the first three quarters, Paris, not normally known for their free throw shooting, was nearly perfect at the line in the final quarter, knocking down their final 16 of 18 attempts that allowed them to pull away for the hard fought 62-52 victory. Up to that point, Speaks’ team had made only 3 of their 9 from the charity stripe.

Paris held a 13-9 lead after the first quarter thanks to the shooting of Jackson, who finished the period with 11 points.

Coach Dustin High’s Montgomery team came charging back in the second frame by outscoring the home team 16-10 to grab a two point lead at the break 25-23. Barrier finished the quarter with 7 points and junior center Savannah Parker had 6.

The Lady Indians opened the third with five straight points that included a three from Barrier and a lay-up by Parker to increase their lead to 30-23 at the 6:52 mark of the period.

Back came Paris, or should we say Jackson.

Jackson went on her own personal scoring spree by scoring her team’s next 10 points that pushed the Ladyhounds back in front at 33-32, following two free throws from MC freshman Shae Harris. 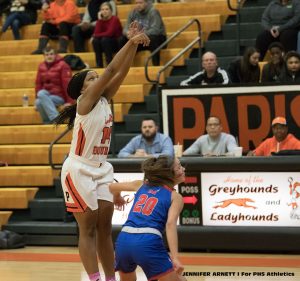 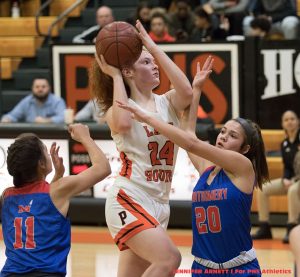 DRAWING A CROWD – Ladyhound freshman Jamie Cowan was very determined to get this shot attempt off despite being pressured by the Lady Indians’ defenders Hayden Barrier (#20) and Reaghan Oney. Cowan finished her evening with 7 points and 9 rebounds.

After both teams traded baskets over the final four minutes of the third that saw seven different lead changes during that time frame, Paris moved in front 42-41 when junior Zoe Strings hit a lay-up at the buzzer on a nice offensive rebound and assist from fellow junior Jazmin Jackson. The Ladyhounds would never trail again.

Junior guard Chez Tye sparked Paris’ run in the final quarter after she scored 8 of her 13 points over a two minute span that helped her team push their lead out to 55-47 at the 3:55 mark of the quarter. Paris would then close the game by hitting 7 straight free throws to pull out the 10 point district win.

To go along with her 27 points, Jackson also had 4 steals. Tye finished her night with 13 points and 3 rebounds, while Strings totaled 11 points, 13 rebounds, 5 assists, 2 steals and blocked 3 shots. Freshman Jamie Cowan had 7 points and 9 rebounds, while freshman guard Asja-li Garrard contributed 4 points and 4 rebounds.

Barrier led the Lady Indians with 18 points. Parker followed her with 12 and Harris had 10. Other scoring came from Allie Dillon with 7, Ella Routt 2, Reaghan Oney 2 and Emily Williams 1.

The Ladyhounds will be back in action Friday night when they face rival Bourbon County (4-1), who suffered their first setback of the season last night against Bishop Brossart. The game that will have a 6:00 start, will be part of the two-day Kentucky Bank Shootout. Speaks’ team will then be back on the road on Saturday afternoon at Lexington Christian.

Montgomery County will host Beechwood Friday night and will travel to Elliott County on Saturday afternoon.