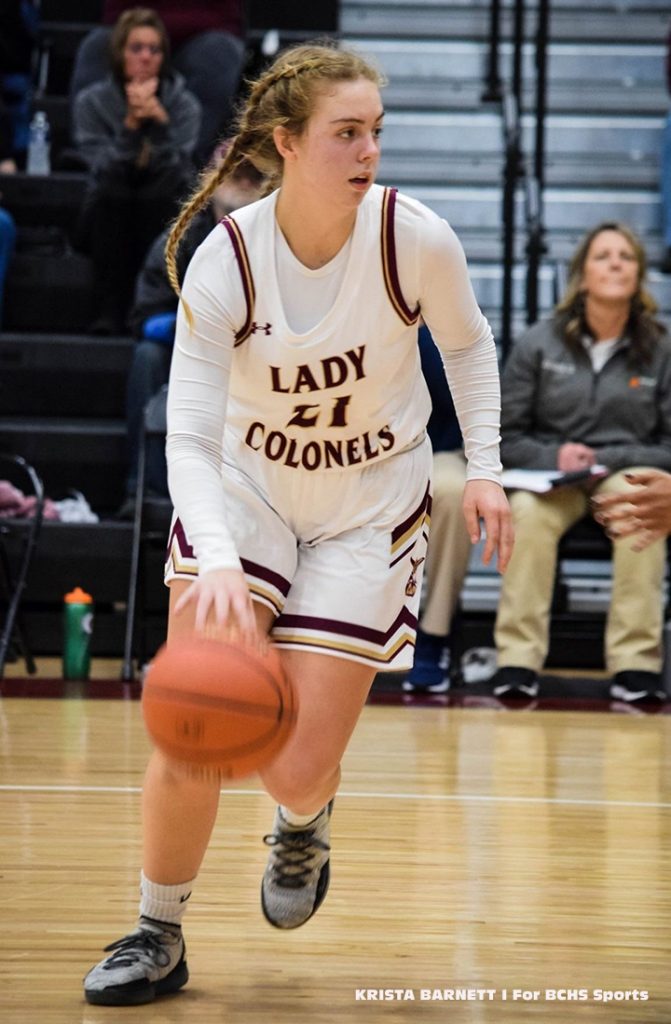 Of Her Career-High 28 Points

In The Third Quarter

With that being said, when this season started, Coach Bill Watson knew that he would need several players to step up to offset the loss of those three seniors (Grace Hardy being the other) if they were going to have any type of success for this season.

For the Bourbon County Lady Colonels, so far, so good!

Tuesday night, during their contest against district foe Montgomery County, Bourbon (7-1, 2-0) rode the back of junior guard McLain Murphy, who wasn’t mentioned among the top returning players in the 10th region but should’ve, to a 46-41 victory over the young but very talented Lady Indians (1-5, 0-2) that one day soon, will be the best team in the region.

Murphy finished with a career-high 28 points that saw her score 17 straight points during an explosive third quarter. She also grabbed 7 rebounds and dished out 3 assists, as well as knocking down 4 three-point goals, with three coming during her scoring spree.

“McLain played well,” said Coach Watson. “She was the only one making shots.”

Montgomery, behind the scoring of eighth grader Allie Dillon, led the Lady Colonels 10-9 after the first frame. Both teams struggled to put points on the board in the second quarter but Coach Watson’s team scored just enough to grab an 18-16 halftime advantage over Dustin High’s team.

Junior guard Lyndsay Johnson hit a runner to start the third that gave Bourbon a 20-16 lead. From that point on, until the end of the period, the rest of Bourbon’s scoring came from Murphy, as the Lady Colonels outscored the host team during the frame 19-7 to grab a 37-23 after Murphy closed the quarter with her third three during her scoring outburst.

Montgomery battled back in the final frame behind freshman Shae Harris and eighth grader Hayden Barrier, as the two combined to score all but two of their team’s 19 points in the fourth. Harris scored 11 points, after hitting 3 threes and Barrier, who had an off scoring night, had 5. 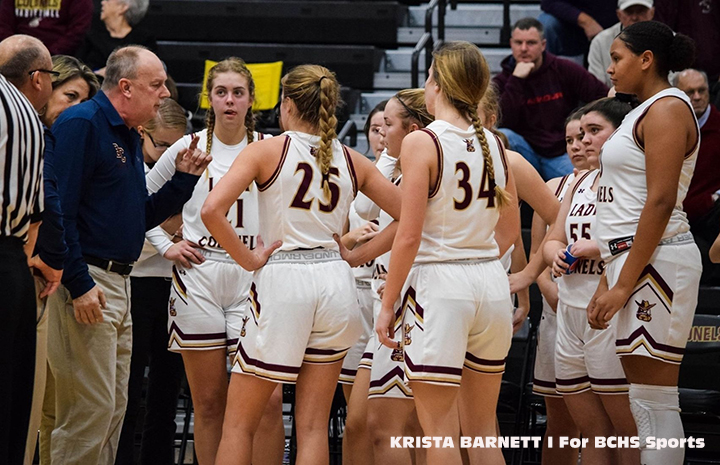 LADY COLONELS OFF TO A GREAT START – Bill Watson talked things over with his team during a timeout at a recent home game this year. The Lady Colonels are off to a 7-1 start to their season and this coming after losing three key seniors off last season’s squad that won the most games in a season for the girls’ team in nearly 30 years.

Bourbon maintained their lead over the final eight minutes thanks to Murphy, Jhaven Meade and Jaydyn “Shorty” Goodwin, as they held on for the 46-41 victory.

Harris paced Montgomery with 16 points. Dillion followed with 14, Barrier had 7 and Emily Williams rounded out their scoring with 2 points.

Bourbon will hit the road just before the Christmas Holiday when they make the journey down 1-75 to Richmond to play in the Jack Buford Classic at Madison Central High School.

They will play Lafayette (2-3) tomorrow night at 7:30. They will return on Saturday to face a very good Rockcastle County team that’s 5-0 on the year at 4:30 and will end the 4-day classic against Breathitt County (1-4) on Sunday afternoon at 2:45.