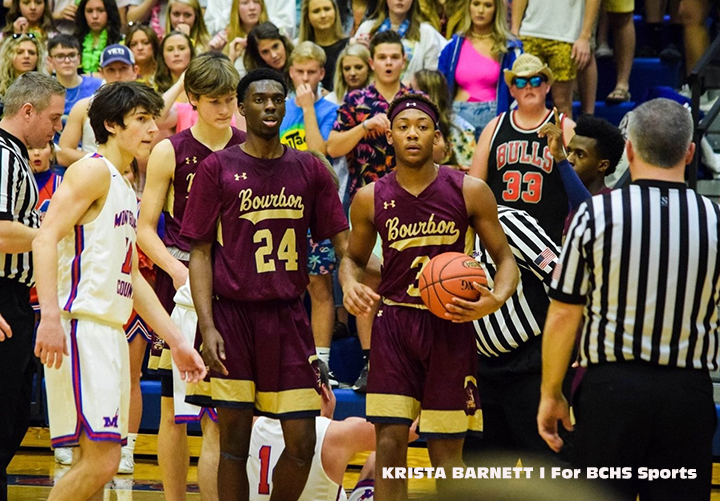 AJ’s LEADING THE WAY – Colonel senior Amirion “AJ” Joyce prepares to hand the ball to the official after getting fouled on his way to the basket against Montgomery County earlier this week that saw the Colonels pull out the tough victory over their district rival. Joyce scored 25 in Bourbon’s win over Louisville Southern last night at Henry Clay. Pictured with AJ is Mukonkole “KoKo” Lukonga. 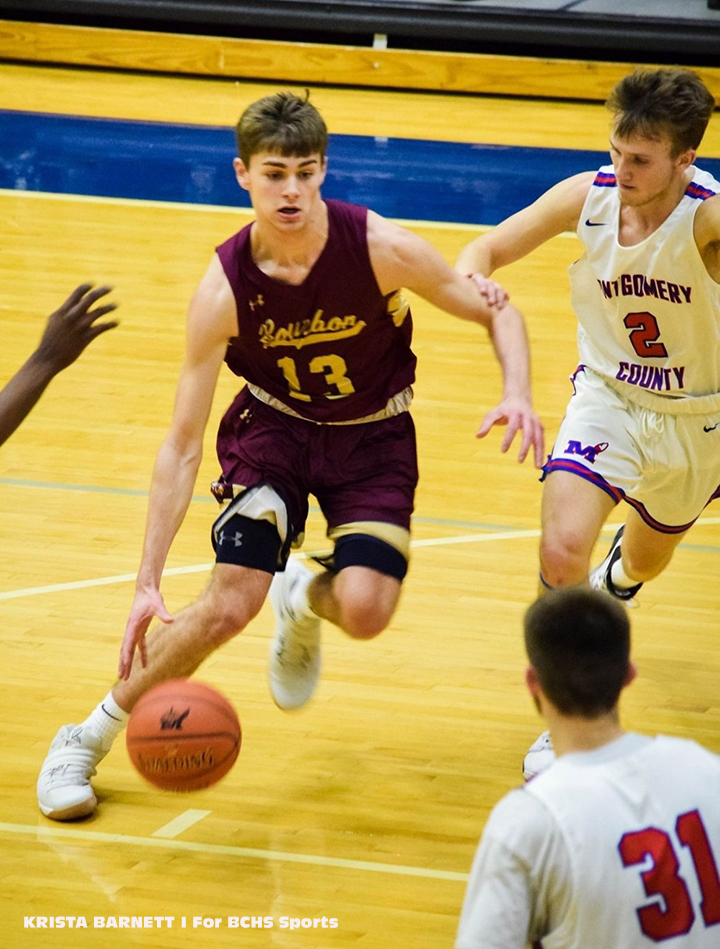 GETTING THE STEP ON HIS DEFENDER – Bourbon junior Jack Huckabay avoided the defensive pressure of Montgomery County’s Brandon Dyer as he made his way towards the basket during the Colonels’ 67-62 district win over the host Indians on Tuesday night. 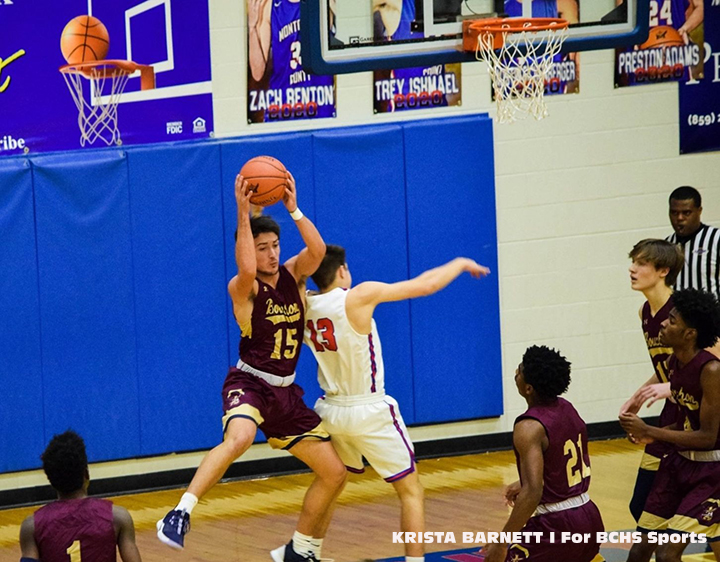 I GOT THIS – Colonel junior forward Parker Estes pulled down this rebound with some authority over Montgomery County’s Trey Carroll during his team’s 5-point win over the Indians. The victory over MC moved Bourbon’s record to 6-0 on the season and thanks to players like Estes, the Colonels improved to 7-0 last night with their win over Louisville Southern in the opening round of the Henry Clay Holiday Invitational.

Currently Playing In The Henry Clay

LEXINGTON, KY – Coach Lamont Campbell capped off his birthday by coaching his team to a 75-58 victory over Louisville Southern in the opening round of the 2019 Henry Clay Holiday Invitational that will continue today through Saturday at Campbell‘s alma mater.

With the victory, the Colonels improved their record to 7-0 on the year, which ties the best start by a Colonel boys basketball team since the 1989-1990 team, under the direction of the program’s all-time winningest Coach Russ Day, went 7-0 before losing their first game to Montgomery County in the championship game of the Cole Ford Christmas Classic that was played inside the Barn on the campus of Montgomery County High School. That Bourbon team was led by, what many say, the best player to ever wear a Colonel uniform, Corey Williams.

With the win over Southern, the Colonels will now move on to the semifinal round where they will play the Lafayette Generals, who beat Columbia (Lake City) out of Florida on a last second shot. The game is scheduled to tip-off tonight at 8:30 at Henry Clay.

The Colonels, who never trailed during the contest, got off to a hot start against the Trojans, taking a 28-15 lead after the first quarter. Jack Huckabay’s lay-up at the 7:04 mark gave Bourbon the 2-0 lead. Then, over the final two minutes of the quarter, Amirion “AJ” Joyce scored 12 straight points that helped his team gain the 13 point advantage.

Southern settled down in the second frame to outscore the Colonels 20-19 thanks to the scoring of Quincy Murrell and Evan Frederick, although Bourbon, behind AJ’s 21 first half points, would lead at the break 47-36.

Campbell’s team increased their margin to 64-46 after three quarters that saw several players get in on the action. Leading the way were Parker Estes, Nakwan “Bone” Joyce, floor general Nakyir “Scrap” Joyce and Amari Faulkner, who closed the quarter with a three that gave his team the 18 point cushion.

Bourbon’s lead grew to as much as 21 in the final quarter following a lay-up from freshman Miles Ezell and from the point on, Campbell’s team would coast home for the 17 point win, 75-58.

AJ led all scorers with 25. He also had 7 rebounds, 3 steals and 3 assists. Scoring 7 points each were Faulkner, Bone Joyce, Koko Lukonga ( 5 rebounds) and Huckabay. Estes scored 5 points and Scrap Joyce finished with 4 points, 5 rebounds, 7 assists and 3 steals. Brycen Collins totaled 4 points and 4 steals. Rounding out their scoring were Ezell with 4, Wade Chapman 3 and Braxton Earlywine 2.