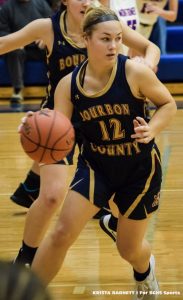 ALL-TOURNAMENT TEAM SELECTION – For her outstanding play during the three-day BSN Holiday Classic, sophomore guard Jaydyn “Shorty” Goodwin was named to the all-tournament team. She finished the three games with a total of 24 points, 9 rebounds, 9 steals and 6 assists 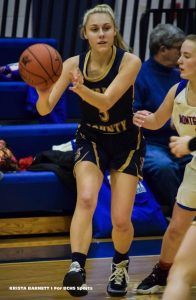 PROVIDING SOME HELP – Makenzie Kincade came off the bench to give her team a lift during their loss to Holy Cross. For that fine effort, Kincade, a junior, was named the Subway Sub of the Game, after finishing with 5 points and 3 rebounds.

Was Named To The All-Tournament Team

PARIS, KY – The Bourbon County Lady Colonels played host to their annual holiday tournament when they entertained 7 other schools in the 2019 BSN Holiday Classic that was completed Sunday inside Russ Day Gymnasium.

The Classic housed some of the best teams in their respective region in Campbell County (No.3 – Region 10), Breckinridge County (No.1 – Region 3) and Covington Holy Cross (contender in Region 9), leaving the host school the unlucky test of facing 2 of those 3 teams.

Below is a look at the Lady Colonels three games during the BSN Holiday Classic. 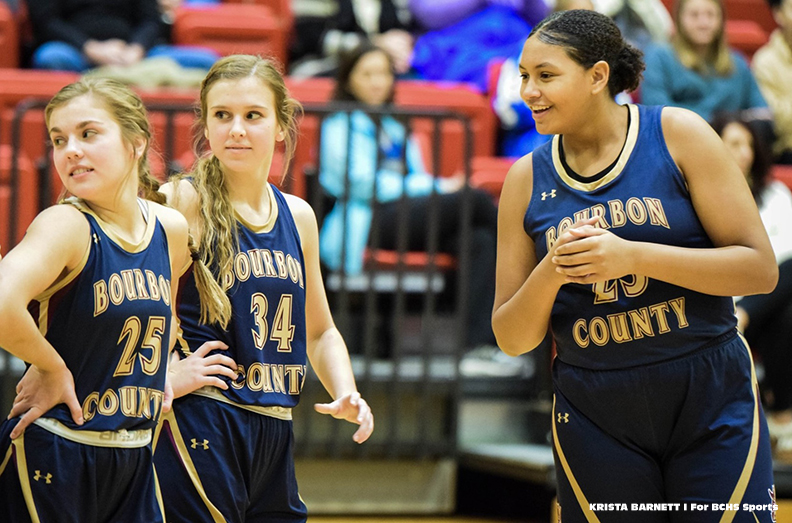 SEE, I TOLD YOU – Following her 18 points, 14 rebounds and 6 blocks effort in a win over Powell County, Lady Colonel freshman Jhaven Meade was named the McDonald’s Player of the Game. Meade is shown in this photo enjoying a laugh with teammates Hannah Hamelback (#25) and Lyndsay Johnson (#34) during their victory over Montgomery County before the holiday break.

The Lady Colonels, behind the 18 points, 14 rebounds, 7 blocked shots and 4 steals from freshman center Jhaven Meade, delivered a big first half before holding off the Lady Pirates for the 12 point win. With her outstanding play, Meade was named the McDonald’s Player of the Game.

The Lady Colonels led 14-10 after the first quarter and then outscored Powell in the second frame 22-7 to grab a 36-17 halftime lead. Powell charged back in the third and fourth period to outscore Bourbon 29-22 but just couldn’t overcome the big 19 point first half deficit.

Powell’s junior Macey Howell led all scorers with 20 points, while also pulling down a game-high 15 rebounds.

The Bourbon County Lady Colonels had a tough time putting the ball in the basket against the Lady Indians and that would turn out to be the difference in the game as Rankin’s Holy Cross team rolled to the 17 point win to hand the Colonels their fourth setback of the season.

Watson’s team connected on just 10 of 43 field goal attempts that included a 2-12 performance from behind the three-point line. They also turned the ball over 20 times.

Holy Cross made 50% of their shot attempts and was 4 of 7 from behind the three-point line. Most of that had to do with the play of junior guard Grace Bezold, as she blitzed the Lady Colonels for 31 points, after connecting on 11 of 14 of her shot attempts. She was easily named the McDonald’s Player of the Game.

The score was tied at 12-all after the first quarter, before the visitors managed to win the second quarter by four points to take a 22-18 lead at the break. It was the second half that cost the Lady Colonels as they were outscored 26-13 over the final two frames.

Murphy paced Bourbon with 9 points, 6 steals, 5 rebounds and 3 assists. Junior Hannah Hamelback had 6 points and 8 rebounds. Kincade, who was named the Subway Sub of the Game, finished with 5 points and 3 boards. Shorty Goodwin had 4 points, while Meade finished with 4 points and 5 rebounds. Johnson rounded out the scoring with 3 points.

Besides Bezold, other scoring for Holy Cross came from senior Jade Simpson with 9, eighth grader Miyah Wimzie 3, freshman Sarah Bottom 3 and junior Kara Krumplelman 2. Although she failed to score, eighth grader Julia Hunt did have 10 rebounds, while Simpson grabbed 9 boards as they outscored the No.13 rebounding team in the state 31-26. 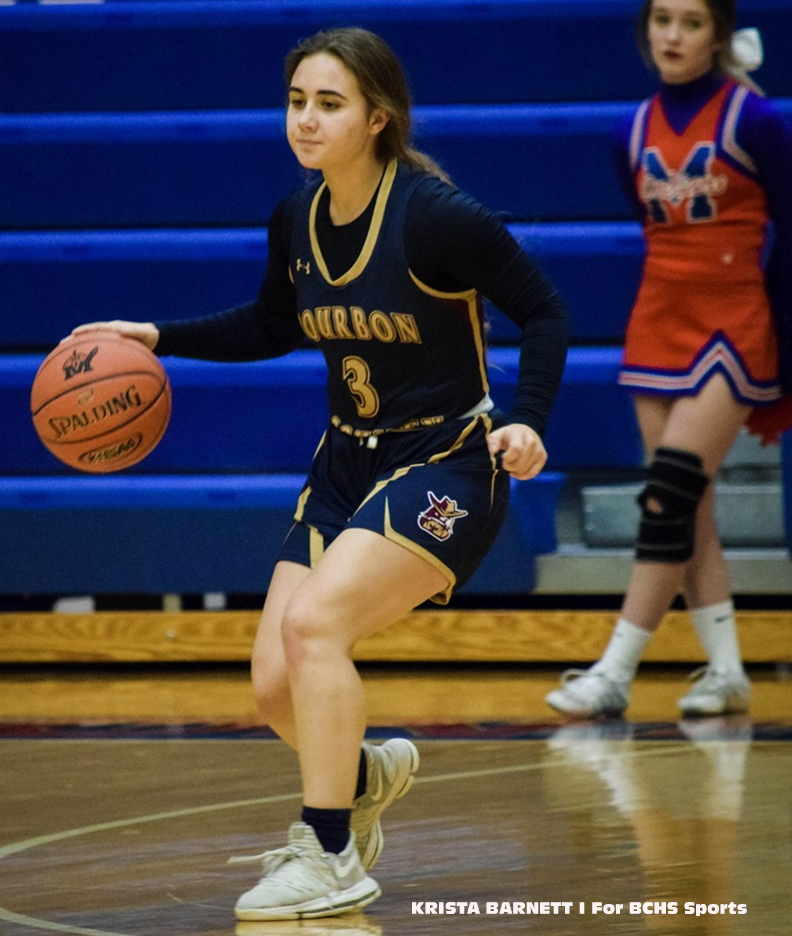 BENCH PRODUCTION – Although her stat line didn’t show it, Lady Colonel junior Jaycee Goodwin came off the bench to provide some nice minutes during her team’s loss to Breckinridge County in the third place game. Goodwin was named the Subway Sub of the Game.

Bourbon finished up the tournament in the third place game against a very good Lady Tigers team located out of Harned, Kentucky.

Shooting played a roll again, as the Lady Colonels had a hard time putting the ball in the basket. They made only 2 of their 21 three-point shots and went 2 of 7 from the charity stripe.

Behind the play of senior Natalee Tabor, junior Aleigha Mucker and sophomore Isabel Grimes, the Lady Tigers led 12-9 at the end of the one and pushed that lead to 28-18 at the halftime break. Bourbon came back in the third quarter to win it by two points but couldn’t overcome a fourth quarter deficit that was won by Breckinridge 16-13.

Murphy led Bourbon with 17 points and 10 rebounds. Shorty Goodwin tossed in 11 points, along with 4 steals and 3 assists. Meade had 6 points, while Hamelback totaled 4 points and 6 rebounds. Johnson finished with 3 points and 9 rebounds. Jaycee Goodwin was named the Subway Sub of the Game.

For her fine effort during the BSN Holiday Classic, junior guard Jaydyn “Shorty” Goodwin was named to the All-Tournament Team.

Good tourney with good competition! Congrats to Campbell County and Coach Nolan Boone on winning the tournament by defeating Covington Holy Cross in the championship game. A huge thank you to our Coaches (Wendy Rankin Mahanna, Todd Earlywine, Kasi Watson, and Will Earlywine) and all of our parents and players for jumping in and helping when we needed it whether it was in the concession stand, selling tickets, or in the hospitality room (I’ve been to my share of hospitality rooms and let me tell ya … without a doubt the best I’ve ever been around!). Thank you to Jay Shelley, Steve Holbrook, and Marion McCarty for running our scorer’s table for all 12 games! Also thank you to athletic trainer Lydia Heebner for covering all 12 games and not falling asleep.