Washington Was Named To 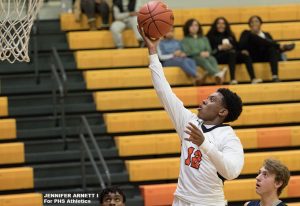 ALL-TOURNAMENT TEAM SELECTION – For his outstanding play during the three-day Williamstown Holiday Tournament, junior guard Ricqiece Washington was named to the all-tournament team. Washington finished the three games with a total of 76 points, 9 rebounds, 9 steals and 3 assists.

WILLIAMSTOWN, KY – The Paris Greyhounds made the journey up north to Grant County after Christmas Day to play in the 8-team Williamstown Holiday Tournament.

The Hounds, who came into the tournament off a tough loss to Bluegrass United Homeschool, was hoping to turn up the energy and play well enough to make a good showing at the three-day Classic. Thanks to the play of their three leaders, Ricqiece Washington, Jamaun Clark and Caleb Johnson, Brooks’ team did just that after winning 2 of the 3 games played, which left them as the third place team in the field.

Paris (3-7) opened the tournament with a blowout win over Burgin (1-10) and then followed that up with a tough loss to a very good shooting Breathitt County team. The Hounds would conclude the tournament with a victory over McCreary County Central (6-7) to return home with the third place trophy. 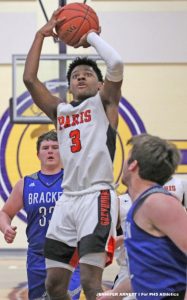 Below is a look at the Greyhounds three games from Williamstown.

The Greyhounds jumped out of the gate quick to grab a 21-6 first quarter lead. A 10-0 run to start the second quarter pushed Paris’ lead to 31-6. From that point on, the Hounds never looked back as the blew past the Burgin Bulldogs 75-28 as they outscored them 27-12 in the second frame and 27-10 in the second half.

Paris jumped out to a 15-10 lead midway through the first quarter thanks to the scoring of Washington and Johnson. Breathitt, however responded by closing the quarter on an 9-0 run to move past Paris at 19-15 after eight minutes of action.

The Bobcats, who would go on and win the tournament, kept their huge run going by outscoring the Greyhounds 16-2 over the first four minutes of the second frame thanks in part of the scoring of senior forward Brandyn Slaughter, who totaled 12 points during their game changing 25-2 run. Coach John Noble’s team led at the break 35-17.

Coach Brooks’ team settled down in the second half with the help of Washington to outscore the Bobcats 36-25, after falling behind by as much as 22 in the third frame (61-39). Paris ended up hitting 6 three-point goals in the second half, with all six (Clark, Washington, Johnson, White, Jakari Ransom and Roberts) coming from a different player.

Slaughter led all scorers with 28 points and 11 rebounds. Senior guard Jack Fugate added 16 points. The Bobcats also won the battle on the boards 44-18. 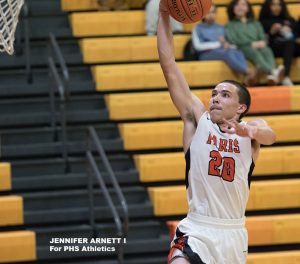 JOHNSON SOARING – After a slow start to his senior season, Greyhound Caleb Johnson put together a good holiday tournament by totaling 39 points, a team-high 17 rebounds, 9 steals, 3 assists and 3 blocks during the Hounds three games in Williamstown.

The third place game was all Paris as the Hounds led from start to finish by increasing their lead after each quarter before leaving Williamstown with the win and the third place finish.

Strong play from Clark, Washington and Johnson, allowed the Greyhounds to push their margin to 12 (54-42) after three quarters as they outscored the Hornets 19-14 during the frame.

Behind the two-man show of Washington and Johnson over the final eight minutes, the Greyhounds never broke, as they continued to pour it on, which eventually led to their 21 point win.

For his outstanding play over the three-day tournament, Ricqiece Washington was named to the all-tournament team.

Paris will return to the court next Tuesday night when they play host to Nicholas County in a boy/girl double header that will start at 6:00 inside Earl E. Redwine Gymnasium. 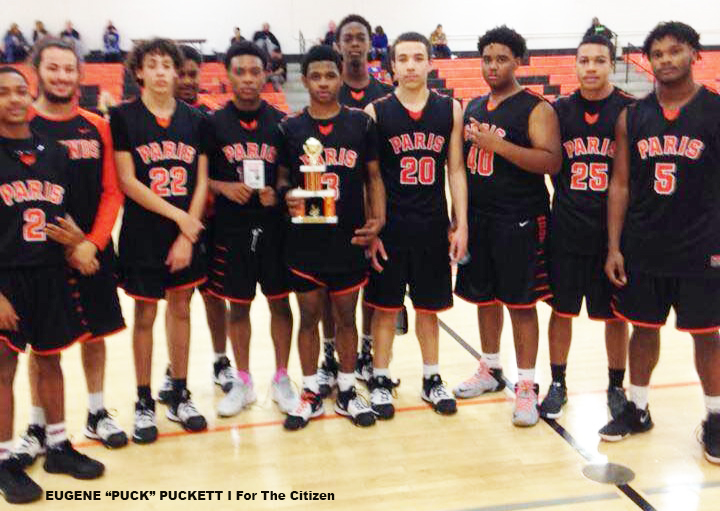