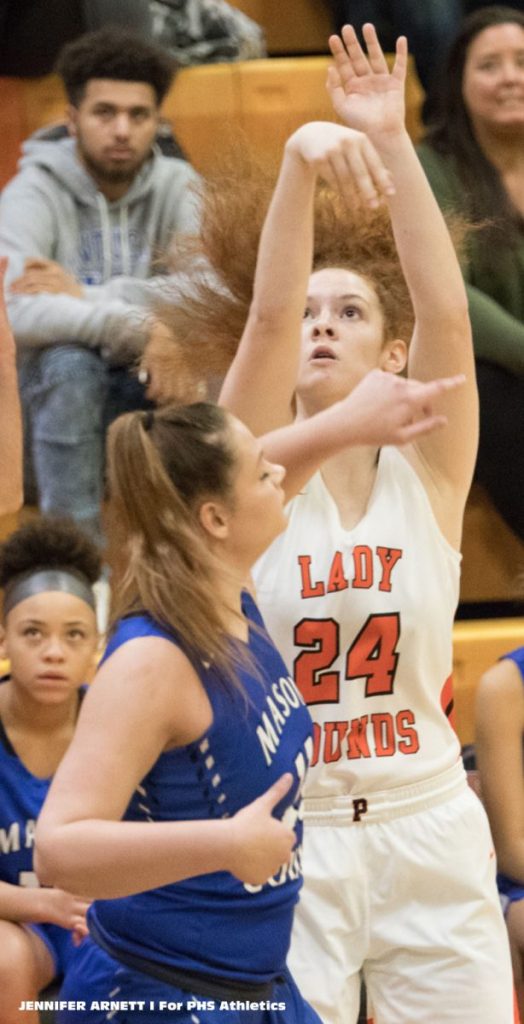 COWAN DID HER THING – Freshman forward Jamie Cowan finished with a nice tournament after she totaled 34 points, a team-high 21 rebounds and 10 steals during the Classic that saw her team win.

HORSE CAVE, KY – The Paris Ladyhounds made the journey to Horse Cave after Christmas Day to play in the first annual KySports.tv Girls Christmas Classic, where they would square off against seven other schools from four different regions.

Thanks to multiple players rising up at key moments, Coach Aaron Speaks’ team made the trip back home with the championship trophy after holding off host Caverna in the final. The Ladyhounds opened the Classic by knocking off tournament favorite Thomas Nelson in the opening round.

Below is a look at the three games that led the Ladyhounds to the championship.

Heading into the tournament, all eyes were on fifth region heavyweight Thomas Nelson (9-3), who was ranked as the third best team in the region with their star players in senior guards Bailey Stiles and Kenleigh Fritz. The two combined for 33 points and 14 rebounds but Paris (9-1) would offset that with some outstanding play from several players that didn’t involve Zoe Strings.

The second quarter saw Nelson extend their lead to 32-24 at the break, although the Ladyhounds, thanks to back to back three-point baskets from Chez Tye and Sanaa Jackson, closed the period on a 6-0 run to get it back under double digits after trailing by as much as 14.

The third quarter saw Speaks’ team come out of the locker room ready to play. They continue to build on their run that closed the first half by scoring the first 12 points of the third frame to move in front of Thomas Nelson 36-32 to cap off an 18-0 run. Behind the 9 points from Jamie Cowan and six points by Jackson, Paris won the third period 22-6 to grab a 46-38 lead heading into the final eight minutes.

During the last quarter, the Ladyhounds were moving right along as they pushed their lead out to 11 at 53-42 with 2:42 showing on the clock, following a made free throw by Garrard.

Instead of throwing in the towel, Nelson, the good team they were, didn’t give up.

A three from Fritz and Gracie Cureton jumpstarted the Generals on an 8-0 run that saw them get to within three (53-50) with under 20 seconds.

Following a turnover and foul by the Generals, Zoe Strings would step to the line with 3.4 seconds remaining and hit two crucial free throws for her only points of the night that gave her team the cushion they needed to hold on for the tough win.

“We knew coming in that we had a tough first round matchup with a very talented Thomas Nelson team,” said Speaks. “We struggled at the beginning of the game but finally got 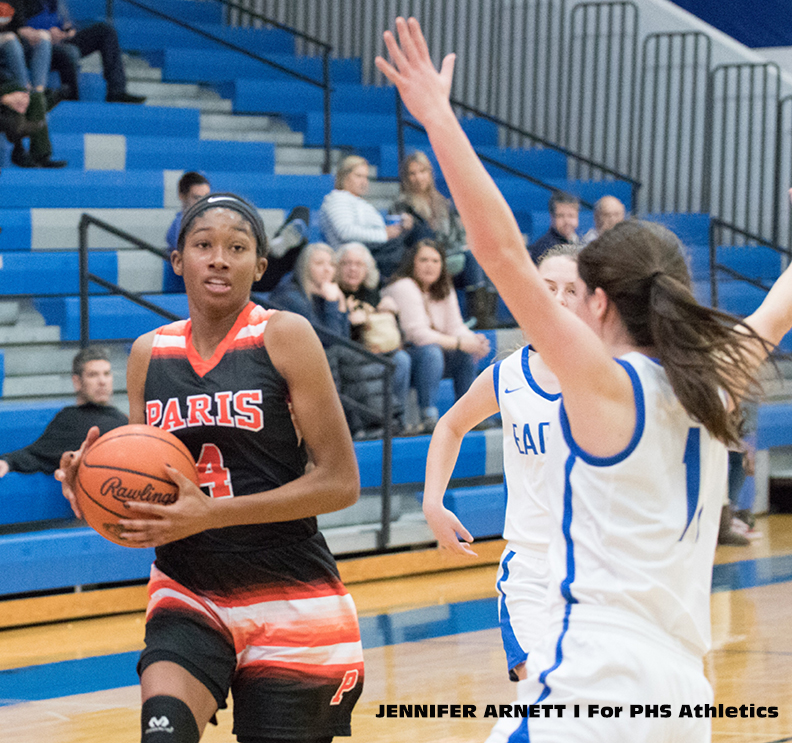 CLASSIC MVP – For her outstanding play during the three-day Classic, Ladyhound junior guard Zoe Strings, who was named Player of the Game twice, was also named the tournament’s MVP. Strings, despite her rocky outing against Thomas Nelson that saw her score only two points, totaled 38 points, 14 rebounds, 11 steals, 9 blocks and 6 assists over the three days.

things going defensively in the second half, which ultimately, helped us advance. The momentum of that big win led to us probably playing our best game of the season in the second round against Campbellsville.”

Fritz led all scorers with 23 points that included 4 three-point goals, while Reiter tossed in 10 points and 12 rebounds.

In what the Coach felt was his team’s best performance of the season, the Paris Ladyhounds clicked on all cylinders to blow by a very athletic and quick Campbellsville Lady Tigers team that entered the contest with a 7-2 record.

Many were looking for a close game, but Speaks’ team had other ideas as they led 13-6 at the end of the first quarter. Strings’ 10 second quarter points and Nia Kenney’s huge play off the bench, helped Paris extend their margin at the break to 28-15. It was the third quarter that saw things go south for the Lady Eagles.

During the third, the Ladyhounds created turnover after turnover that turned into 14 points as they outscored the Region 5 contender 23-10 to grab a 51-23 lead heading into the final quarter.

Paris’ lead grew to as much as 37 (60-23) on a three from Cowan to get the running clock started early in the period. Campbellsville outscored the Ladyhounds 7-3 the rest of the way to get it back down to the 33 point margin.

Strings paced her team with a game-high 19 points. She also had 6 blocks, 5 rebounds, 3 assists and 2 steals. Her numbers helped her get selected as the Player of the Game. Cowan followed Strings with 16 points and 8 rebounds, while Tye tossed in 13 points, 4 rebounds and 3 steals. Other scoring came from Jackson with 6, Garrard 5 and Kenney with 4 points and 2 rebounds. Riah Oliver and Katy Chumbley saw action but failed to score.

The Ladyhounds started this game on fire as they jumped out to an early 10-0 lead. But after Paris’ hot start, host Caverna charged back to make this championship game very interesting. The Lady Colonels closed the quarter on a 13-2 run to grab the one point lead heading into the second frame.

Caverna, behind their top scorers Kaliana Richardson and McKeeya Faulkner, maintained their lead and extended it by one at 25-22 by the halftime break.

Just as they did in their previous games, the Ladyhounds stepped it up a notch in the third period.

Picking up steam thanks to their suffocating defensive pressure, Paris turned a five point deficit into a five point lead (32-27) as they opened the period with a 10-2 run.

Then Strings, who was well on her way to a huge night, got injured after going for a steal and had to sit for the remainder of the game. Up to that point, Strings was ballin’ hard with 17 points, 6 rebounds, 4 steals and 3 blocks.

Trying to continue to play, while thinking about their teammate at the same time, Paris had to regroup and gather themselves just to finish the game. And they would!

Tye, Garrard, Cowan, Jackson, Jazmin Jackson and Chloe Kemper all came up big down the stretch to help their team hold on to a huge victory at 47-42 despite their poor free

throw shooting over the final eight minutes that saw them hit just 2 of 7 attempts that allowed the Lady Colonels to stay within striking distance.

“I think we displayed a lot of heart and determination to win a game that was filled with emotions and adversity throughout,” Speaks said. “We were not shooting the ball well, we were dealing with foul trouble, and we were all an emotional wreck because we were concerned with the well- 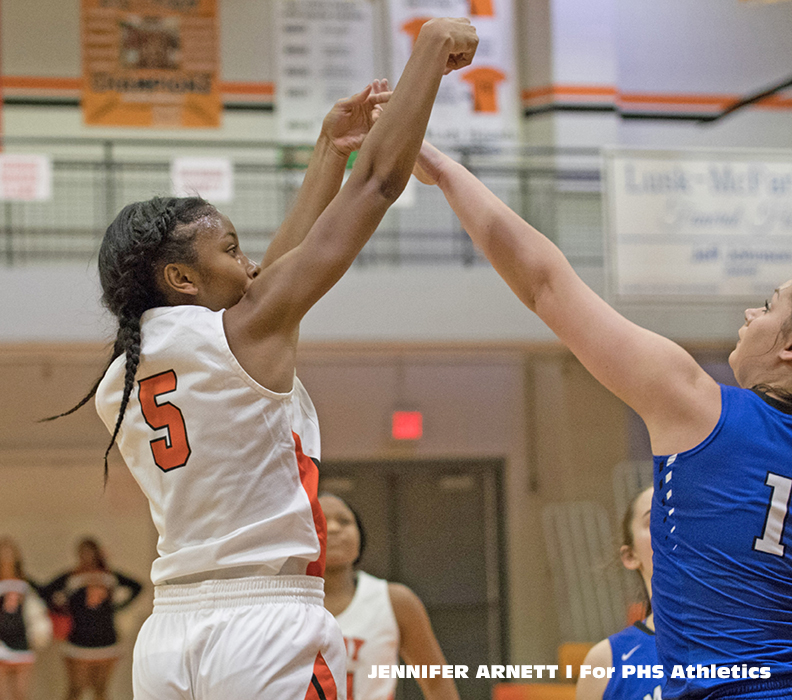 being of Zoe (thank God she will be ok) after she took that scary fall in the third quarter. To be able to find a way to win on the road, in that type of environment, when things aren’t going our way, shows how much these girls have grown together as a team, even though we’re still fairly young.”

Tye reached double digits for her team with 10 points. Garrard scored 9 points to go along with her 6 steals. Jackson had 8 points, 4 rebounds and 3 steals. Cowan scored just 3 points, but she did collect 6 rebounds and a career-best 7 steals. Jazmin Jackson came off the bench to pull down a team-high 7 rebounds.

Richardson led Caverna with 15, Faulkner had 11 and Staci Burnett added 9.

The Ladyhounds will be back in action Friday night when they travel to Falmouth to face 10th Region foe Pendleton County and then return home on Saturday afternoon to play host to Bryan Station at 2:00. On next Tuesday night, they will be part of a girl/boy double header inside Earl E. Redwine Gymnasium when Nicholas County makes the short trip over from Carlisle. Game time is set for 6:00.

To see highlights and photos of each Ladyhound game from the Kysports.tv Girls Christmas Classic, you can go to KySports.tv Facebook or Twitter page. 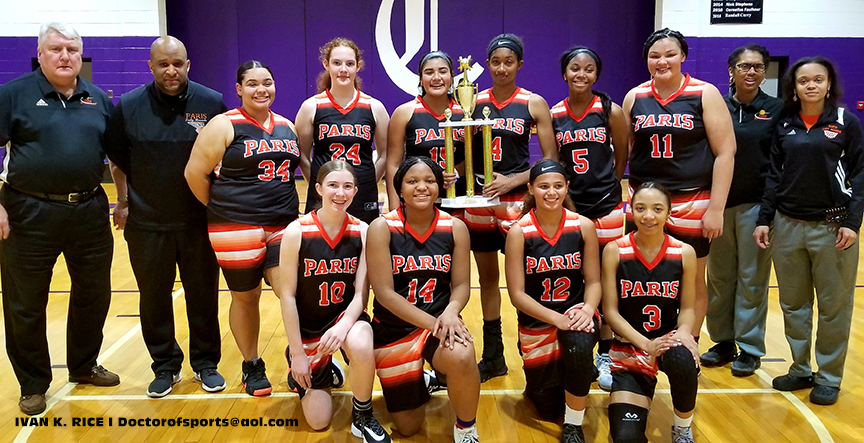